Five Off-Broadway Shows You Have to Run & See Right Now 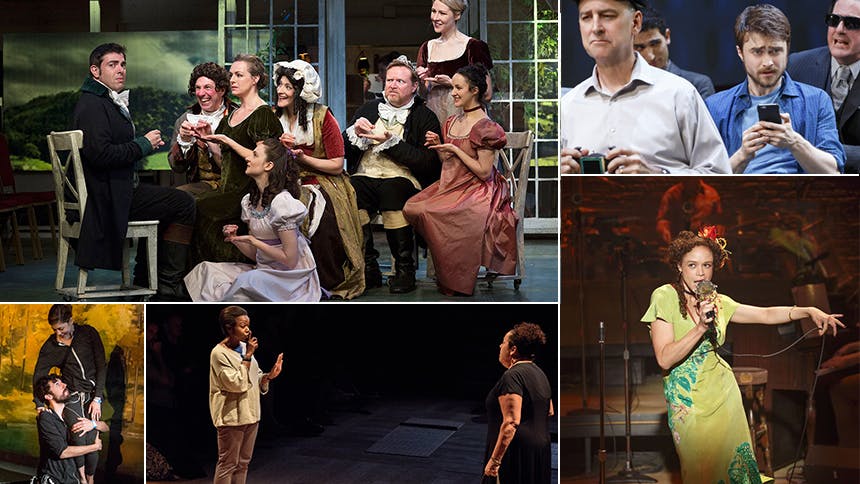 The best part about summer in the city is that Broadway pretty much takes a breather after the Tony Awards—which means that it’s the perfect time for off-Broadway to have its big moment, and this summer is a scorcher. Here are the five off-Broadway shows you have to make time for this summer.

This was by far one of the most entertaining nights I’ve recently had at the theatre. I went in not knowing the source material or film and brought a friend who was well-versed in each, and we both fell completely over the moon with the inventive, intimate, fast-paced, and well-acted production. If you liked Peter and the Starcatcher and/or Gentleman’s Guide, this Jane Austen adaptation should be on the top of your must-see list.


The critics have all raved about Small Mouth Sounds, but it’s hard to impress on someone the powerful work these six actors are doing (almost entirely silently) throughout this hour and 45 minute play about people at crossroads in their lives that led them all to the same silent retreat. There’s lots of laughs balanced by some pretty heavy emotional moments, making it a feel like a full meal. I’ll be thinking about this troupe of actors’ absolutely incredible performances well into the fall.


The Effect practically killed me by the end. This felt like an indie movie Netflix recommends that you’re like, “Sure, I’ll check it out.” Then after you’re talking about it at brunches, dinners, and at work until everyone in your life says, “Yeah, we get it.” If the phrase “meet me in Montauk” means anything to you, get yourself over to the Barrow Street Theatre before Labor Day.


New York Theatre Workshop has been the birthplace to the musicals Rent, Once and Bright Lights, Big City, and through July 31, it’s home to Hadestown, Anais Mitchell & Rachel Chavkin’s cool, earthy, folksy, jazzy modern musical adaptation of the Orpheus and Eurydice myth. And while the entire company gives you life over and over, it’s Great Comet star Amber Gray as Persephone that’s worth the price of admission. Her performance of the title number is permanently seared into my memory. If you’re a fan of Dogma or Once, go enjoy a night down in Hadestown.


Privacy is a total mind screw. We are so complacent in our easy, accessible tech world, it’s natural to turn a blind eye to what we are giving up to join the online community—well this interactive new play, starring Daniel Radcliffe, dunks your head in a bucket of water to wake you up. If you watched any of the Snowden documentaries or even felt intrigued during that Snowden-esque arc on The Good Wife, Google Maps your way over to The Public Theater before August 14.