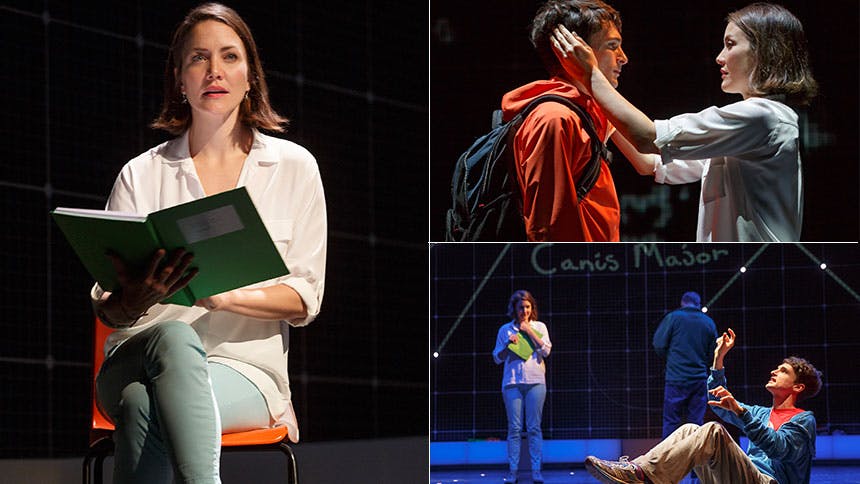 Rosie Benton returns to the New York stage as Siobhan, the endearing teacher/friend/guide to protagonist Christopher Boone, in the Tony Award-winning Best Play The Curious Incident of the Dog in the Night-Time. BroadwayBox caught up with the Stick Fly and Saturn Returns alum to talk about her own experience with ASD, how the BBC helped her sound legit, and why you sometimes just need some reality TV.

1. What kind of research did you do about children/teens on the spectrum and the people who work with them? How did that inform your performance of Siobhan?
We did research as a cast, and I did a lot on my own—scoured the internet, read books on Autism Spectrum Disorder (ASD), watched A LOT of documentaries and TV shows that deal with people with ASD and those that educate or help them, and talked to people I know in the same line of work as Siobhan. The new members of the cast also went to visit the young adults at QSAC (Quality Services for the Autism Community) and they graciously spoke with us about living on the spectrum and working with teachers (like Siobhan) to enhance their lives. I also drew on my time working with young adults on the spectrum when I was an undergraduate theatre major at Syracuse University. I helped run a theatre program for kids with different abilities. There was one student I became very close to and that experience has helped me in understanding the Christopher/Siobhan dynamic.

2. Who is your English accent idol? Who are you serving us a bit of in Curious?
In the mornings when I am feeding my son, I listen to BBC News Hour. In addition to doing dialect work with our esteemed coach, Ben Fury, I would just repeat the news; tell my son what was happening in the world using the accents from the BBC World Service reporters. Whatever Razia Iqbal would say I would then say a million times and focus on certain sounds. Being a radio reporter, she obviously has a great vocal quality and clear diction, so it was very helpful to listen and imitate her while doing other things.

3. This is your first time replacing on Broadway. What was the most exciting part about that process and the scariest?
The most exciting part is that the show is a hit!! It never gets old bowing to a standing ovation night after night. Coming into an existing show that you know people love takes a ton of pressure off, yet, connected to that, the scariest part is carefully handling and nurturing what came before me. I want to be respectful to what was created when I was not in the show but still make the part my own. There is a whole family of the original cast still in the play and it is nerve-wracking to walk into that and hope I can fill the big shoes left behind...or forge new shoes. Fortunately, this cast is shockingly supportive and fun. They embraced us newbies and made the whole transition nearly stress-free. Nearly. I mean, we still had only one day of tech, so....yikes.

4. When you were in NYU, whose career did you idolize?
I have never really idolized anyone's career, per se, but I do adore/follow the craftsmanship of certain actors. Edie Falco and Frances McDormand are two artists whose work I have always deeply respected. They are both such singular talents, rooted in themselves, and seemingly fearless, on and off camera. Frances as Olive Kitteridge and Edie as Carmela Soprano are both tour de force turns on the screen that blew me away. They are also both so smart and powerful and most importantly, you don't see their acting. They are seamless. I love it when I can watch things and absolutely forget about acting—it is so rare, but outstanding, when it happens. And they do Theatre!

5. What’s the most embarrassing TV show you just can’t get enough of right now?
Top Chef, Ellen's Design Challenge, House Hunters International, Real Housewives. I am not ashamed. I feel perfectly content letting my brain drift off on a sea of terribly-edited plots, forced drama, and judge's tables. After chasing a baby all day, commuting to midtown, and then doing an intense Broadway show, I feel like a half hour of reality TV some nights is just what I need. Oh, and a beer.

See Rosie Benton bring Siobhan to life in 'The Curious Incident of the Dog in the Night-Time' at Broadway's Barrymore Theatre.

The Curious Incident of the Dog in the Night-Time
Best Priced Tickets
Newer
Hot Clip of the Day: Maurice Murphy & Tituss Burgess Take You to Church with "In His Eyes"
Older
If You Love I Love Lucy, You Owe It To Yourself to See Something Rotten!
Sign up for BroadwayBox Discount Alerts