Jason Tam Shares His Evolution of Lewks as the Otherworldly, Animesque Be More Chill Villain, the SQUIP 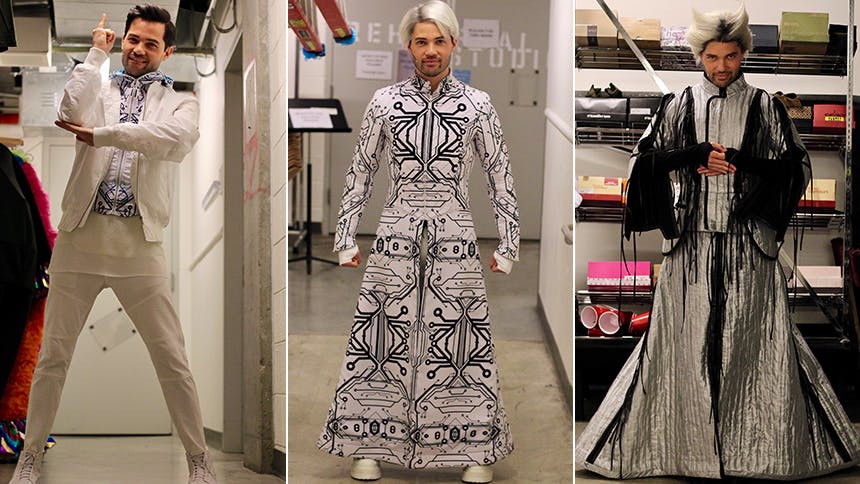 In the new hit musical Be More Chill

, suburban nerd Jeremy finds a pill from Japan that allows a quantum computer to implant itself in his brain to make him cool. It's called the SQUIP, it's evil, and it's played brilliantly by Jason Tam. Jason (who starred in the Broadway productions of A Chorus Line, If/Then, and Lysistrata Jones and the off-Broadway hit KPOP) appears to Jeremy as Keanu Reeves-inspired sensei of cool, and as Jeremy's life upgrades so does the SQUIP.


Scroll on as Jason Tam brings BroadwayBox through each of his fierce Bobby Tilley-designed lewks from Be More Chill.

This is me hallway surfing for the first 35 minutes of the show.

This lewk is for when the SQUIP first appears to Jeremy. I dig the low-key layering that our costume designer Bobby Tilley created. It’s extra, but not in a trying-too-hard kind of way. In the palette of character costumes, white is generally reserved for the SQUIP which helps it feel appropriately otherworldly. Real talk I feel like a diamond in this costume—shiny, and cool, and like I could make you super rich, or I could make you bleed. This is the SQUIP at its most appealing. Thank you Stephanie Hsu for popping a full squat to snap this low angle pic!

Lewk number two is the following day, when the SQUIP starts helping Jeremy on his journey to get popular at school, and win the affection of Christine Canigula. This is the SQUIP rolling up his sleeves and getting to work. It feels functional but in a polished, SQUIPy way.

As Jeremy upgrades, so too does the SQUIP, as reflected in lewk number three. This is my favorite and makes me feel like a badass. The fabric is thick, but stretchy, which is good because it’s tailored within an inch of its life. The heavy, platform Doc Martens boots make me feel tall, and grounded, and powerful. The thumb holes in the undershirt make it look like I’ve wrapped my fists, like a boxer prepping for the ring. This is the SQUIP going Super Saiyan.

This menacing lewk makes me feel like a proper villain for the anime cartoons I used to watch growing up. It’s as if a kimono-robe-dress were made from the insides of a super computer. I feel like royalty in this, and it completely changes the way I carry myself as the SQUIP. It took me a few days to learn how to move in it without tripping over material. It’s very heavy, and very hot, and very worth it. This is the SQUIP in its true, final form.

Don't miss Jason Tam's performance as the SQUIP in Be More Chill at off-Broadway's Pershing Square Signature Center through September 23.