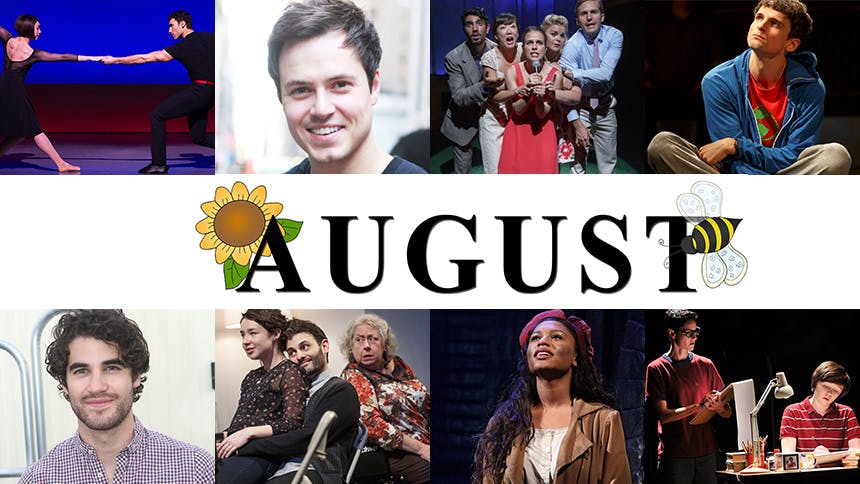 The only thing hotter than a NYC subway platform in August...

1. It’s safe to say An American in Paris is the most beautiful musical playing Broadway right now. Treat yourself to a romantic summer night in post-WWII Paris, then sit back as the stunning Tony-winning dance numbers envelop you. The B’way ballet only runs until October so you have to get to the Palace Theatre soon.


2. Les Miserables has only a few weeks left on Broadway. Sure, it’s easy to put off revisiting a classic like this, but you are going to miss The Miz so much when it’s gone, and then it will be too late. Don’t suffer Les Miz FOMO. Also, this closing cast is pretty stellar (John Owen-Jones, Brennyn Lark, Chris McCarrell, Alison Luff). Final performance at Broadway’s Imperial Theatre on August 28


3. Rock of Ages alum Aaron C. Finley is Kinky Boots’ new Charlie Price beginning August 8, and he is so worth going back for. His voice is really awesome—he was a pretty outstanding Drew in ROA. Check him out singing some Rent. Running at Broadway’s Al Hirschfeld Theatre


4. Broadway says goodbye to 2015’s Tony Award-winning Best Musical and Best Play in early September, making August your last full month to cry, laugh, and completely lose your mind at Fun Home and The Curious Incident of the Dog in the Night-Time. You seriously don’t want to miss either of these ground-breaking pieces of art. ’Fun Home’ runs at Circle in the Square and ‘Curious’ plays Broadway’s Barrymore Theatre

5. Coming from someone who would use Sex and the City quotes as AIM away messages, Engagements is kind of like early season 1/season 2 Sex and the City in all the best ways possible. Instead of Manhattan, all the relationship drama unfolds in Boston, and our Carrie Bradshaw is lovable anti-hero Lauren (an excellent Ana Nogueira). Buckle up for this relationship rollercoaster where you constantly root for and against every couple you meet. Running at off-Broadway’s McGinn/Cazale Theatre through August 20


6. White Rabbit Red Rabbit is turning it out in August with five headliners that would all be considered “must-see”. The idea of the show is an actor is handed a script he hasn’t seen, he’s had zero prep, and it’s about to all unfold before the audience in real time. Fun right? Even more fun with this crew: Ramin Karimloo (August 1), Tony Danza (August 8), Randy Rainbow (August 15), Michael Urie (August 22), and Darren Criss (August 29). Running at off-Broadway’s Westside Theatre

8. 2016 Tony Award-winning Best Play The Humans has a new home on Broadway. The drama that hits so close to home on so many levels for so many people begins anew at Broadway’s Schoenfeld Theatre on August 9. Same killer cast, same Tony-winning set, only now with more leg room.

9. Second Stage’s world premiere play The Layover sounds super interesting—and pretty intense. It’s a darkly funny, psychological thriller about how much we could ever really know about the people (physically and emotionally) closest to us. Running August 9-Sept 18 at the Tony Kiser Theatre

10. This is pretty cool. The Lambs Club launched a Broadway Sunday brunch series called Broadway Jazz Fest. A Broadway star croons the crowd with jazz standards as you enjoy a fancy brunch at this NY landmark. Tony nominee Tony Yazbeck kicked off the concerts, and next up are stars from Something Rotten! (August 7), Paramour (August 21), and Waitress (September 25).