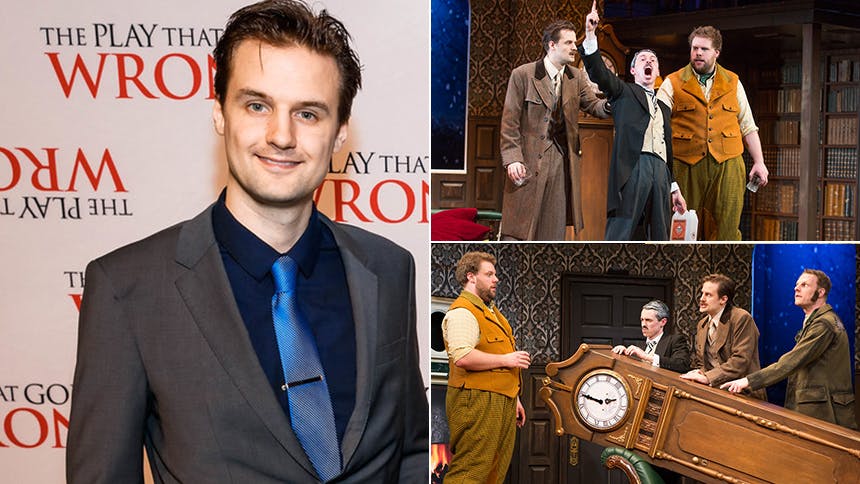 Henry Shields is part of the Olivier Award-winning Mischief Theatre trio that wrote and star in the hit comedy The Play That Goes Wrong. Henry plays Chris Bean, the President of the Cornley University Drama Society, the director of the fictional, disastrous play within a play The Murder at Haversham Manor, and the murder mystery's lead detective, Inspector Carter.

Read on as BroadwayBox talks with Henry Shields about creating the piece, playing the straight man, and the Broadway memory that will last a lifetime.

1. What’s your writing process like with Jonathan and Henry, and how has it changed from conceiving this show to now?
Our initial writing process tends to be quite simple. One of us will sit at a computer and type whilst the other two knock ideas around and improvise scenes. When we started writing The Play That Goes Wrong that was what we did for a few weeks and what emerged was a fifty-minute show of which we were very proud, but which couldn't have sustained much longer. Since then the change has been that we now work to write two hour shows, which need much more structure and a satisfying arc. In practice this means after the initial creative phase we do a lot of discussion, editing and killing of darlings, before the final product appears.

2. What’s the key to playing the straight man in a comedy like this? Having also written the piece, was it a strength you had already mastered and then wrote to?
Playing the straight man is sometimes a lonely job. You can feel like everyone around you is having all the fun while you just watch and grimace, but I find the way to enjoy it is to treat it as a serious dramatic role. You're not there to get laughs, you're there to provide the emotional pain that makes the jokes all the funnier. I'm not sure why I wrote myself into the straight role, because I enjoy being silly as much as everyone else. It probably had something to do with wanting more lines...

3. Who were your comedy icons growing up?
I really idolised stand ups when I was growing up. Ross Noble, Bill Hicks, and Stewart Lee were big influences. As a child what they were doing seemed to me to be amazing; being able to perform alone to massive crowds, with no costumes or set or music to help them, and elicit tears of laughter. I now go to see Stewart Lee live when I get the chance and I'm still blown away by how brilliantly his shows are crafted. I think he comes the closest to turning comedy into a real art form.

4. What was it like when J.J. Abrams first told you guys he wanted to bring this piece to New York? Did Broadway seem inevitable after the Olivier win or did it knock you guys out?
To be honest we didn't really react when J.J. said he wanted to help us because we'd already heard the same thing from a few different people and it had always come to nothing. Since then I've found out that J.J. is a man who gets things done! I think there was always a suspicion we would one day take the show to Broadway but the shock of it all didn't really hit home until opening night. The memory of the relief I felt when our first American audience laughed at my opening jokes will stay with me forever.

5. Do you have an early memory of making people really laugh—the moment it dawned on young Henry that he was funny?
I always loved telling jokes and being a clown at school but my first real success was with a film-noir themed sketch show I wrote and performed at university with my friend Joe Rizzo-Naudi, called A Suitcase Full of Nothing. It got actual, real, massive laughs, the kind of which I had dreamed since watching my stand-up DVDs religiously as a child. I remember my mum speaking to me after the show and saying, "Blimey, you should be a comedy writer.” It's simple, but it has been my favourite review to date.