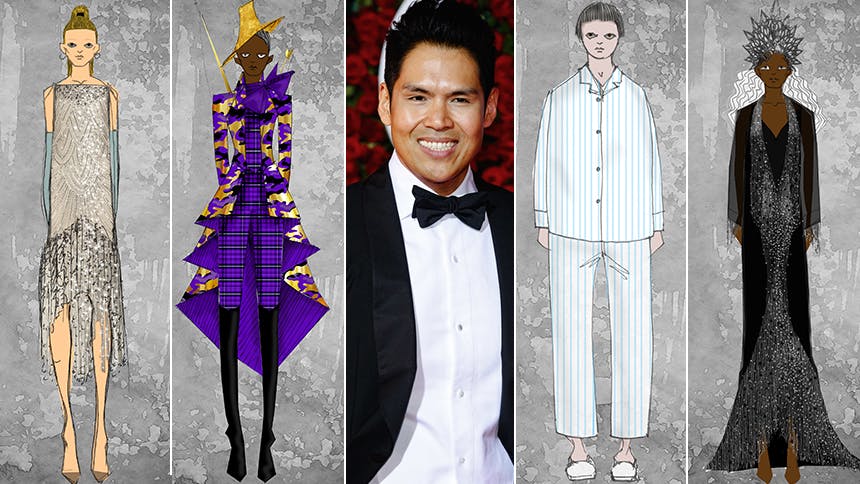 Tony Award-winning costume and set designer Clint Ramos is one of the most in-demand designers working in NYC right now. His Broadway resume includes Eclipsed (Tony win), Six Degrees of Separation, The Heidi Chronicles, The Elephant Man, Sunday in the Park with George, Violet, In Transit, and off-Broadway’s Sweet Charity, Here Lies Love, Angels in America and Bella. He is also the principal costume designer for City Center Encores! Off-Center.


Next season he will design the costumes for the first Broadway revival of Once On This Island, but first he returns to The Public Theatre (where he has designed over a dozen shows) for their upcoming Shakespeare in the Park production of A Midsummer Night’s Dream

. Scroll on as Clint offers BroadwayBox a first look at his designs and how each was inspired.

The setting is kind of timeless—it has influences from the ‘20s. It started with this music idea that Lear deBessonet (the director) and Justin Levine (the composer) had. They were looking at a lot of jazz bands because there’s a wedding band on the stage all the time playing music. From there, I started looking at it and thought it’d be interesting to give an homage to the silhouettes from the early 20th century. So it runs the gambit of shapes from the ‘20s through the ‘50s with a lot of modern couture influences. 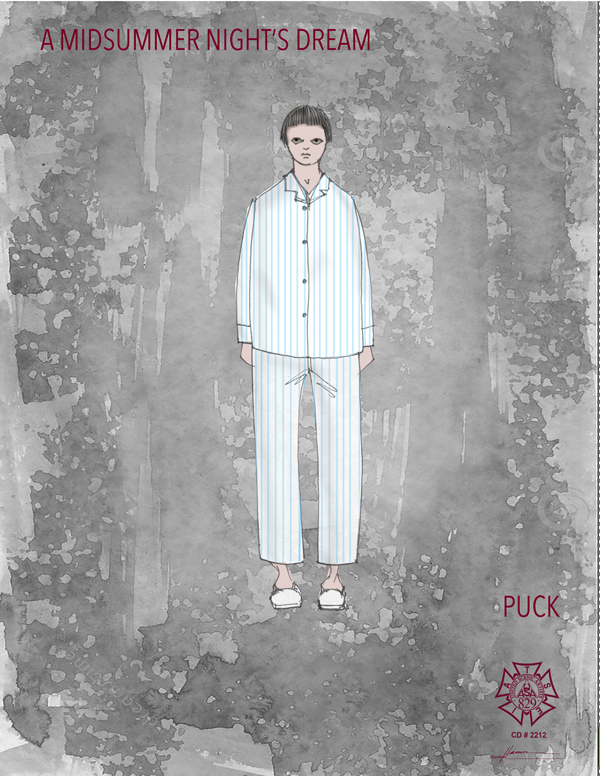 We had this idea that the fairies would be old people—like octogenarians. They are in their black and white sleepwear, so it’s pajamas and nighties. I had this idea that maybe magic happens in the delicate time between waking and sleeping, and that was the idea of why they are in sleepwear; but it mirrors this idea that with elderly people they are close to the threshold of moving on. They are in a magical place in the cycle of life. So, once we decided that, we thought, “What do the mortals look like? Well maybe they are exuberant and they yearn for something greater than themselves.” I think that’s mirrored by these bold, color-blocked patterns. 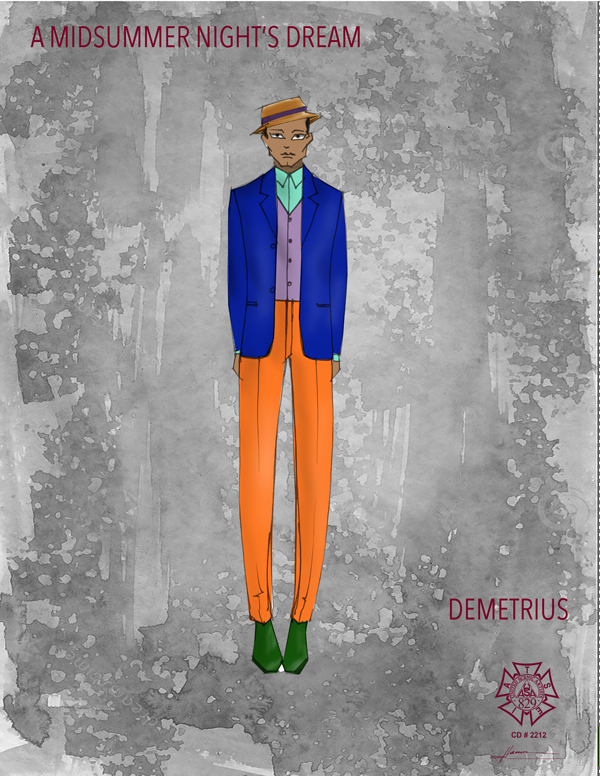 What you see in Demetrius is part of that whole color-blocked system. It’s very joyful. It’s them attempting at something bigger than themselves. We tried to physicalize happiness. 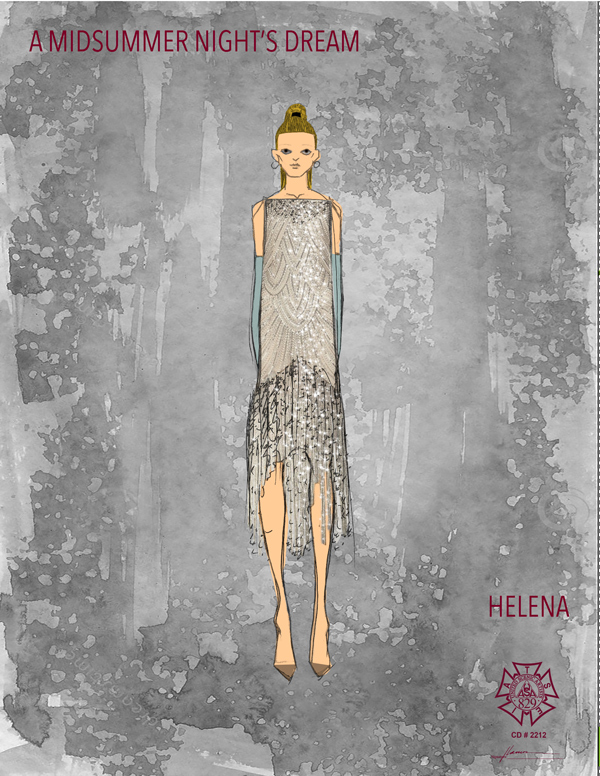 Helena is played by Annaleigh Ashford (who I just worked with in Sunday in the Park with George), and this is influenced by the wedding band. The ‘20s silhouette made sense. It’s a fully-beaded shift with fringe on the bottom. It’s cut like a modern dress that’s heavily influenced by the ‘20s—her hair will be modern, she’ll have modern heels on, and those turquoise gloves. 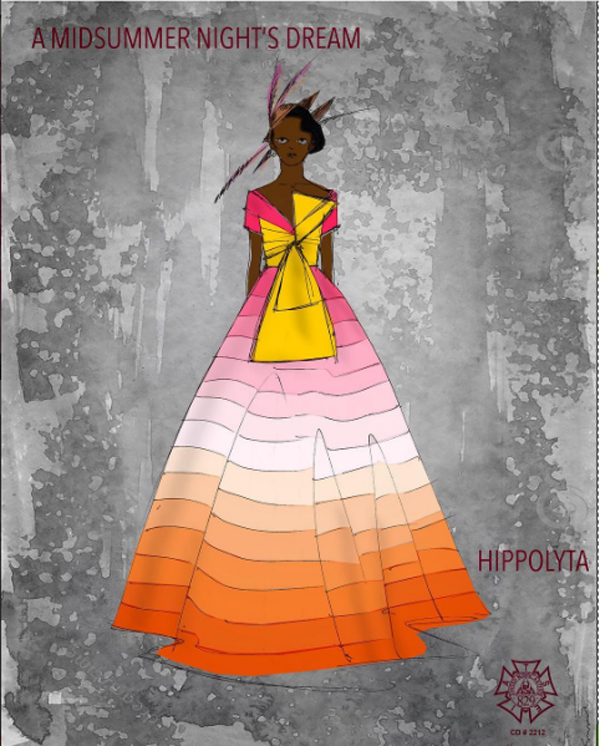 Shakespeare describes her character as Queen of the Amazons, and the whole play revolves around their wedding. Then, because we are in the Park and we start the show as the sun is setting, I thought it would be great to put all of them in the first scene in something afternoonish. There’s something afternoon tea/ garden party that influenced that outfit. It’s based on a lot of these garden gowns that women wore in the early 20th century. It’s all silk organza and it’s tiered. She’s now Queen of the Glamazons. 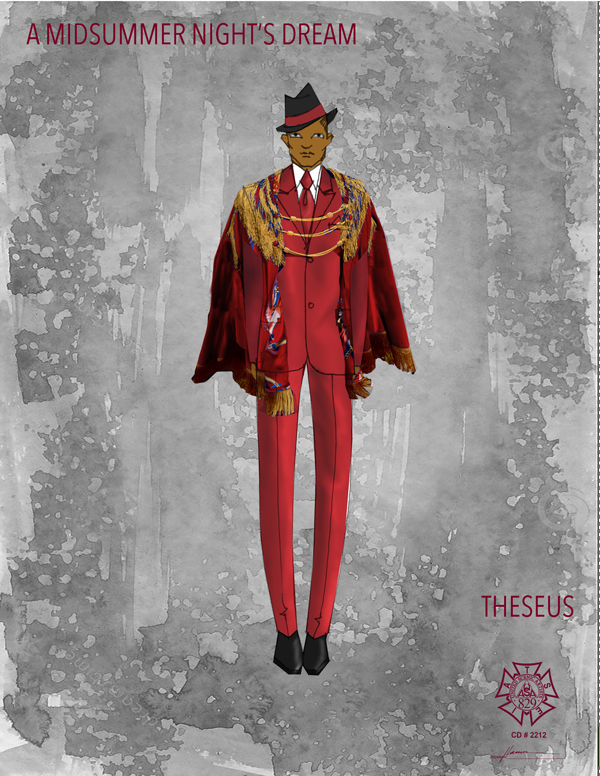 This look is the counterpoint of Hippolyta. They start the show. She walks through these doors in that gown and then Theseus comes in in this red silk-wool suit that is very shiny and satiny. The cape is based on a blue Macklemore cape that I was in love with. He needed to look rakish and powerful and exude sexiness and confidence. It pokes fun at this idea of masculinity and impressing women. 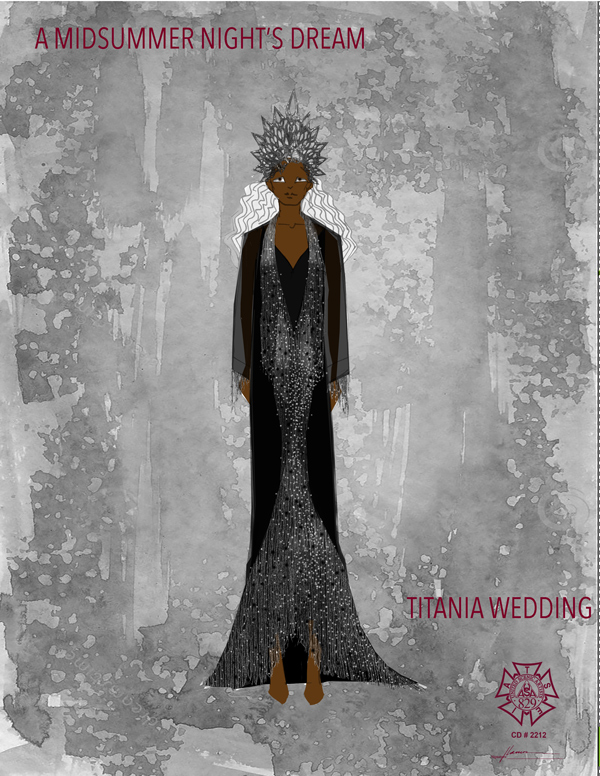 This is Phylicia Rashad at the wedding. That is based on a piano shawl with these really tall fringes. It’s almost like she’s wearing one shawl with sleeves that goes from top to bottom, and everything is fully beaded. It moves and shimmies with her. On top of her head is her fairy crown that we’ve never seen before. Earlier in the play, she’s just frolicking with Bottom, so a lot of the time she’s in this glamorous negligee. Then in the final moment she and Oberon appear in blacks. It ties into the band, who are also all shimmery in black. 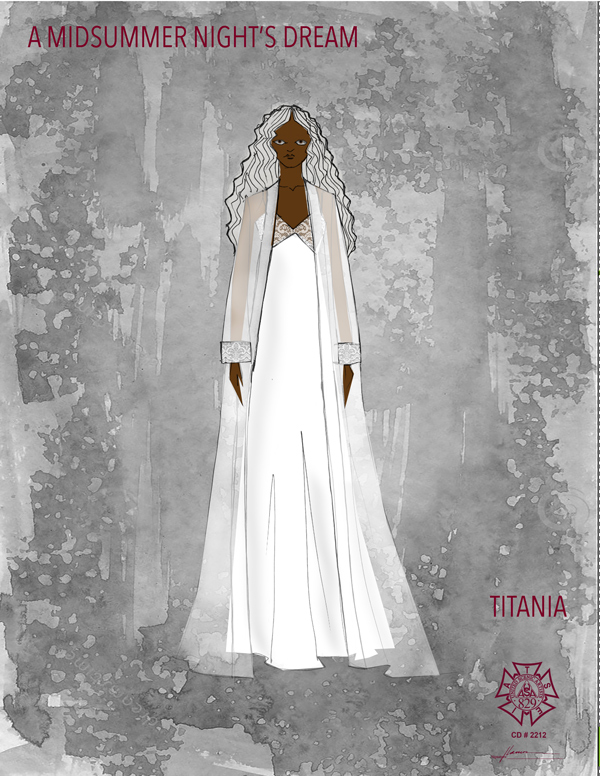