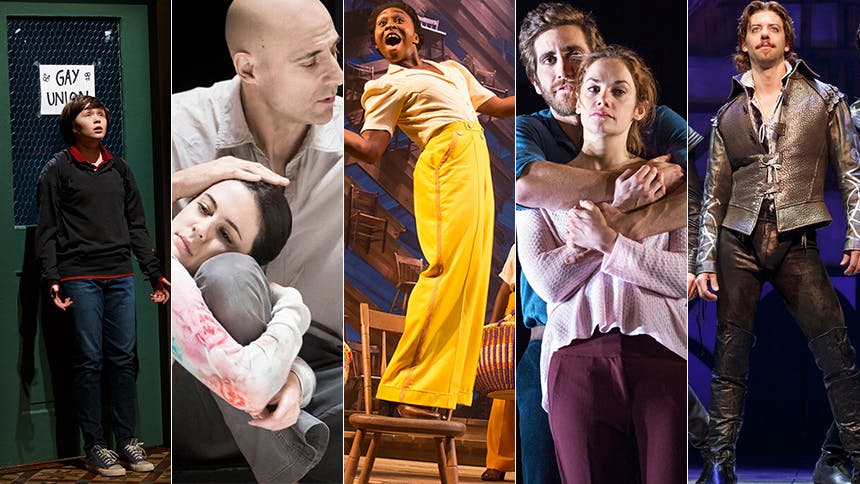 Ti Moune may be waiting for life to begin, but I was living my entire life 10 times over at these 2015 Broadway plays and musicals.

Kristin Chenoweth gave Broadway audiences the epic performance her whole career has been building toward, and it was unforgettable. Her Lily Garland is musical theatre folklore now.

9. An American in Paris

God bless 'An American in Paris' for giving Broadway Robbie Fairchild and Leanne Cope. Also, Bob Crowley and Christopher Wheeldon's amazing work was a feast for the eyes.

The must-see family musical 'School of Rock' inspired two big questions in 2015: 1. Where in the world did they find these amazingly talented kids. 2. How does rising star Alex Brightman do eight shows of that a week without an alternate?!

One of the hardest things about 2015 was forgiving Broadway for not embracing this top-shelf musical comedy fully. The critics loved it but sadly Broadway audiences weren't ready to say I do.

Fresh and funny barely begin to describe the musical comedy Broadway has waited seasons and seasons for. As a lover of Broadway, you can't forget the experience of seeing 'A Musical' on stage for the first time.

Do you remember laughing through tears as Jake proposed to Ruth? Cause I sure do. (And yes, it's still too soon to talk about the Tony snubs...maybe in 2017.)

New Yorkers are tough until we're all sobbing in the dark together at this Tony-winning Best Musical...and how wonderful that this small show about a lesbian and her closeted gay dad could deservedly win Broadway's big prize in 2015.

3. A View From the Bridge

Sitting onstage at 'A View from the Bridge' was hands down one of the most electrifying and exciting experiences of the year. We should all be so lucky to be that close to those performances.

A groundbreaking musical in the tradition of 'Oklahoma', 'Rent', & 'A Chorus Line', 'Hamilton' has become larger than life in 2015, and its genius is undeniable.

The whole revival start-to -finish is magic...but when Cynthia Erivo takes the stage for 'I'm Here', it was the most religious Broadway experience of 2015.

A View from the Bridge
Best Priced Tickets
Newer
It Wouldn’t Be Christmas Without Half a Dozen “Hard Candy Christmas” Videos
Older
Hot Clip of the Day: Giving It Up for Muppets Christmas Carol
Sign up for BroadwayBox Discount Alerts