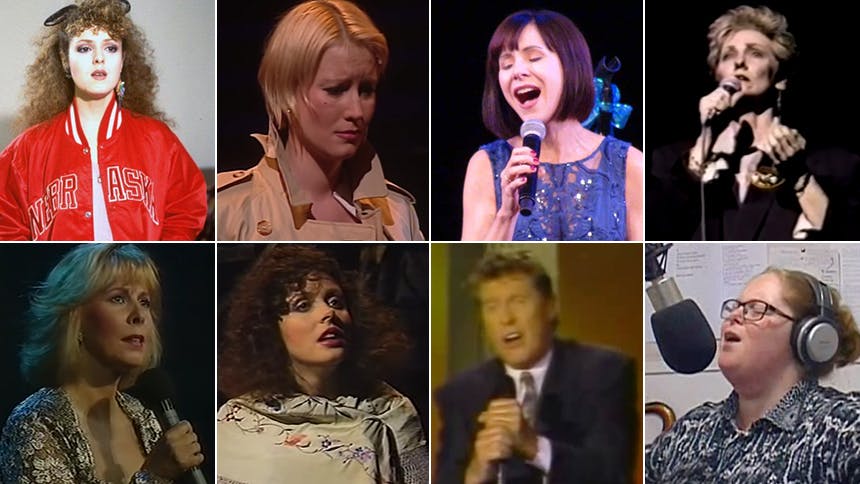 Andrew Lloyd Webber & Don Black’s musical Song and Dance opened at Broadway’s Royale Theatre (now the Jacobs) on September 18, 1985. The show won Bernadette Peters her first Tony Award for playing Emma, a young British girl who moves to New York and her trials with finding love. Betty Buckley replaced Bernadette for the end of the run.


To mark the musicals 33rd anniversary, here are 10 of our favorite performances of the heartbreaking number “Tell Me on a Sunday”.


Listen, when the original New York Eva and UK Norma records an ALW tune, it gets included, even if there is no video to accompany the audio. Honestly, it doesn’t really sound like Patti at first. My head is flooding with conspiracy theories that it’s a false recording and someone doing it in the style of La LuPone until the bridge, because there's the hint of Les Mouches’ Patti. Still my uncertainty has tainted it for me, but may you enjoy.


Sorry Phans, but I’m not feeling this in Crawford’s voice. It feels like those musical moments where the Phantom gets ethereal (and kinda creepy). Also, the orchestrations feel like they are swallowing him up a bit. But he’s still an icon and I bow to his talent.


The former Jersey Boys recording artist makes the song his own, adding in some fun, unique vocal flair. The performance is really grounded, and he sells it.


Tony nominee Susan Egan (Broadway’s original Belle) is backed by a full, gorgeous orchestra and she’s in perfect voice. I wish we could see her face clearly for the performance, but none of that matters when you get to 2:40. There’s something about her performance here that makes me want to hear her sing the Cathy songs in JRB’s The Last Five Years.


I must confess, I was absolutely taken by this video YouTube suggested after seeing me watching over an hour of the same song. It’s just absolutely beautiful. Full stop. End of story.


The musical was written for Marti, and was recorded by her for the BBC. Her performance is so beautifully acted. It feels more monologue than song—moving stuff. But I think other singers make it more beautiful (especially the bridge at 2:30).


My gosh! True heartbreak is the name of the game here, folks. She’s giving you those Eponine moments in that raincoat. The bridge still misses the mark just slightly for me, but she picks up major points for the teary finale.


Forgive the bootleg, but it had to be done. It’s the only video of Bernadette performing the song. It’s tough to judge a performance within a larger piece to the big emotions of a cabaret or filmed performance. It feels very authentic, and it’s moving. She’s perfection—obviously and always—but I bet it would be totally epic standing at a mic in beaded gown during a concert.


The way Cats Tony winner Betty Buckley interprets music is so singular. I bet her “Before The Parade Passes By” on the Dolly tour is going to be legendary. It feels more resigned to her fate than the pleading way some others play it. Obviously, by the time she gets to 3:30, it’s apparent that she’s come to slay. I clutched my pearls when she belted “take the hurt out of all the pain” with that little Grizabella paw at 3:37.


This version from the Phantom icon and her incredible shawl is the one everyone knows from YouTube. It’s full-out, vocally and emotionally. She’s so still, letting the music do the movement. Her performance (most especially in that tricky bridge) makes this song soar. When she hits that “take the hurt out of all the pain” at 3:25, it feels just as grand as any number ALW wrote for Norma Desmond.

Newer
Do You Love Drag Race & Mean Girls the Musical? Because the Time Has Come to Lip Sync For Your Life at DragCon
Older
Broadway Bucket List: Be More Chill Star George Salazar Breaks the Mold As He Sings His Dream Roles with the Help of Lauren Marcus & Joe Iconis
Sign up for BroadwayBox Discount Alerts