Exclusive! Hear Tony Winner Andrea Martin on the New Episode of the Hilarious Support For This Podcast from Jessica Fontana & Ryan Langer 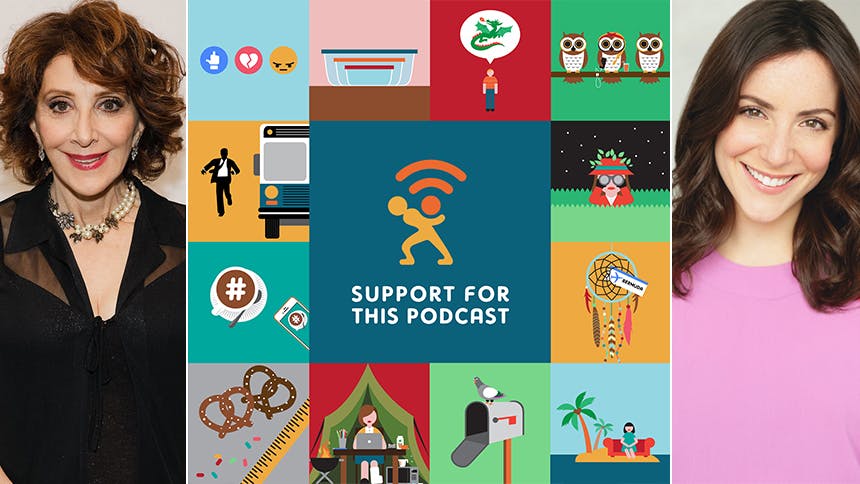 If you love comedy, theatre, and podcasts, you are going to live for Support For This Podcast. Created by Jessica Fontana & Ryan Langer, it's an improvised, satirical interview-style comedy podcast in a similar vein to the beloved Christopher Guest films and is described as "the very popular, very buzzy interview show all of your on-trend friends are already listening to. Support For This Podcast features unbelievably important people discussing super relevant topics, interviewed by an incredibly gifted and humble journalist, Emily Amy Lauren Becca (Fontana)." 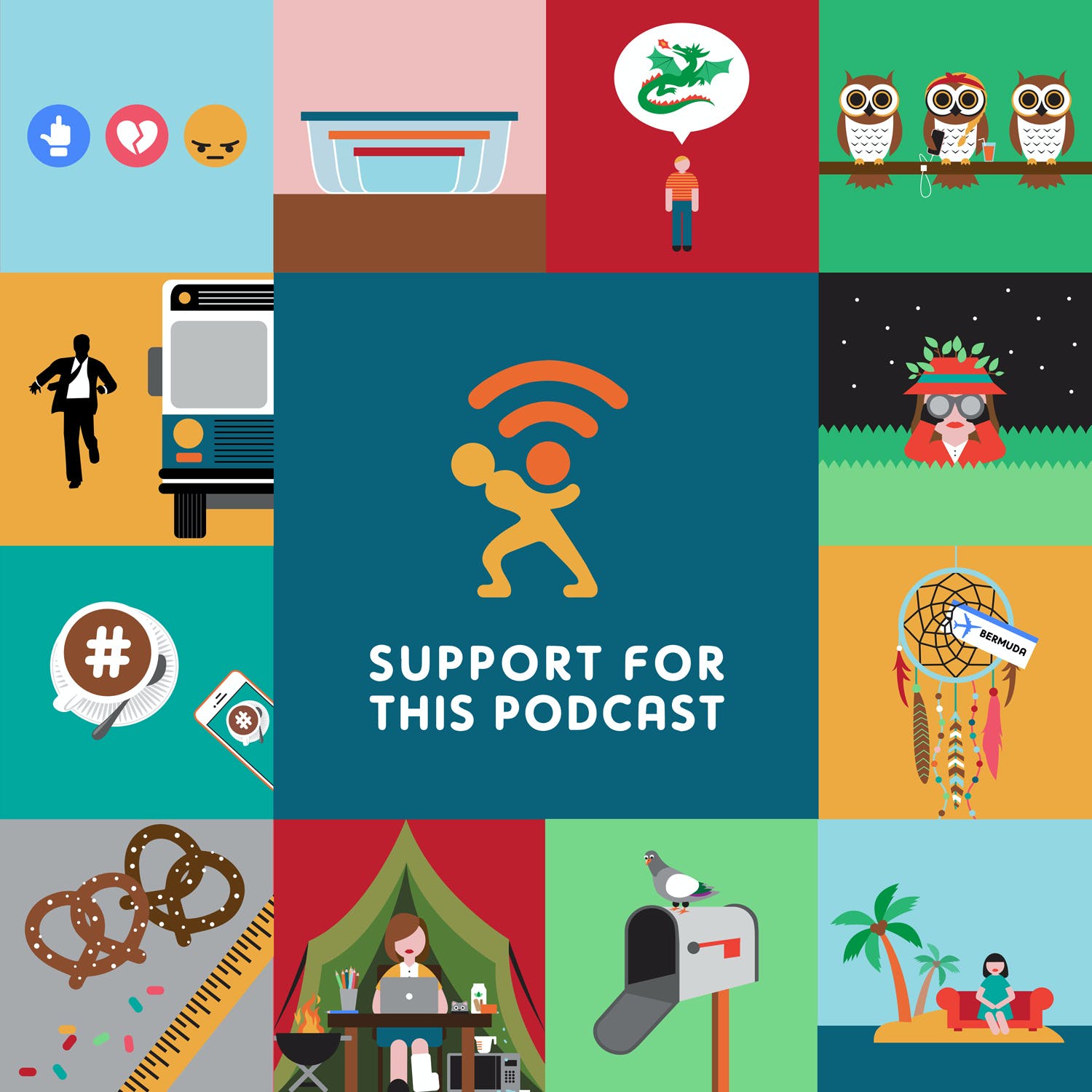 
Now in its second season, Support For This Podcast features guest appearances by a stellar lineup of theatre favorites including Tony nominee Santino Fontana (Tootsie), two-time Tony nominee Christopher Sieber (The Prom), David Hull (Crazy Ex-Girlfriend), Greg Hildreth (Frozen), and Tony and Emmy winner Andrea Martin (Pippin, Difficult People, the upcoming new comedy Gary: A Sequel To Titus Andronicus). Take a first listen to Martin's episode below, in which she is someone who hilariously cannot grasp the idea of buying things online and not shopping in stores.

BroadwayBox caught up with Support For This Podcast star and co-creator Jessica Fontana (Broadway's Cinderella and off-Broadway's Once Upon a Mattress) to talk about the creation of the series, dream guest stars, and the podcasts she loves to listen to.

1. How did the initial idea for Support For This Podcast come about?
Ryan Langer, (my collaborator and co-everything for Support For This Podcast) and I have been friends for years. Ryan’s a composer, and we first met when I sang demos for him at BMI. Fun fact: Benj Pasek introduced us. Anyway, we were at lunch one day and we were discussing wanting to create something together. We were joking about how everyone we know has a webseries or a podcast, so I think the original idea was to make a webseries about a webseries about a podcast about a podcast. Kind of like the movie Inception, but even more confusing, and so, so dumb.

Once we realized that making a webseries would be really hard and expensive, we decided to just do the podcast part. At the time, we didn’t realize that there was already a podcast about making a podcast called “StartUp” about the beginning of Gimlet Media (a podcast network). Then a couple years later, that podcast got picked up and turned into a (now cancelled) ABC sitcom starring Zach Braff called Alex Inc.

So basically, I’m saying that Ryan and I predicted the future, and we’d love to have our podcast on Gimlet. Hi, Alex Blumberg. Another fun fact: I went to high school with the uber successful and lovely podcast host PJ Vogt of Reply All fame, and I’m a big fan of his show. And again, just to reiterate, we’d like to be on Gimlet’s network and then subsequently have our podcast optioned into a TV show. Is this what #secreting is? Am I doing this right?

2. What guidelines did you set for yourselves? How did you strike the right tone?
The basic framework was to model it after Fresh Air with Terry Gross. I’ve always been a big fan of the show and the format is straight-forward and easy to replicate. Tonally—it varies episode to episode depending on the guest and the subject matter—and since it’s improvised we don’t know what that will be until we’re done recording. The subjects of each episode come from Ryan and I brainstorming and agreeing on what we feel like deserves to be lovingly skewered—be it glamping, using the internet to stalk your boyfriend, or Facebook birthdays. The idea for making fake ads came almost as an after-thought and has turned out to be one of our favorite elements of the show. Ryan and I keep a running list for ad ideas—only now we keep thinking of fake products/apps that actually exist. You can read almost any product description on Goop and think you’re listening to our show.

3. How much of the podcast is improvised? What is the process of recording an episode like?
All of the interviews are completely improvised. We give the guests the outline of the character that they’re playing, what they’re there to talk about, and a few sample questions. But when we record, it’s all improvised. That being said, we have a lot of fun in the editing room. We record in a soundproof studio for about 45 minutes and end up keeping anywhere from 15-20 min, typically. The ads are all scripted and recorded separately.

4. You have quite the incredible lineup. Is there a dream guest you’d love to play with on the podcast?
Thank you, and yes, I agree. We’ve been really lucky to have so many ridiculously funny guests. A special shout-out to Greg Hildreth for being our first-ever guest/guinea pig. We really didn’t know if the concept was going to work. Greg’s ensuing brilliance assured us that we had stumbled into a good idea.

There are dream guests that I will force to come on our show, like my new friends Julie Halston and Sarah Stiles. (I’m writing this from Chicago where they’re currently making my stomach hurt from laughing so much in Tootsie*.) *PS: Plugging Tootsie starring Santino Fontana (upcoming Season 2 podcast guest and my husband), while promoting my podcast is the epitome of marital bliss/synchronicity.

Other dream guests would have to include D’arcy Carden from The Good Place, Tina Fey, Ellie Kemper, Nick Kroll, John Mulaney, Martin Short and Zach Woods. (I put that list in alphabetical order as to not offend the huge stars I mentioned in case they actually read this. Does that make me incredibly considerate or totally delusional?) Either way, please, huge stars, come on our show. After all, we somehow convinced Andrea Martin to appear and she has two Tonys and two Emmys!

Subscribe now to Support For This Podcast to keep up with all the clever hilarity.