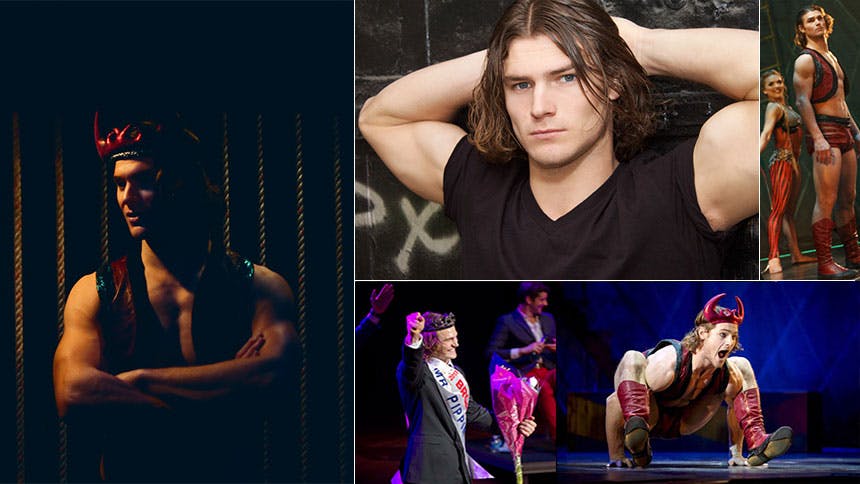 When the company of Pippin steps onstage and tells audiences they’ve got magic to do, they really mean it. And part of this Tony-winning production's magic is watching the acrobats and gymnasts who populate the onstage circus, particularly the eye-catching, swoon-worthy Orion Griffiths. The strapping Griffiths has some of the show’s most jaw-dropping moments (beyond the abs), including the must-see-to-believe stunt below.

BroadwayBox caught up with Broadway Beauty Pageant winner to talk Pippin, strip teases and growing up in a traveling circus.

1. The moment in Pippin I most look forward to still:
I think everybody would expect me to say my moment where I open Act II, but I would like to say “Extraordinary.” I really get to live in the moment in that scene.

2. My biggest pinch-me moment since the show began has been:
When I won Mr. Broadway. My whole life I dreamed of being a movie star or an actor, and when I got to do that—and I found out it was for charity.

3. The only way to describe my routine for the Broadway Beauty Pageant that year is:
Risky. I was very unsure about stripping on stage, and I thought what is the most professional way I could do this? And I was like, “aha, in a handstand.”

5. The part of Pippin I relate most to:
The most relatable part for me is that he’s in my world and he’s trapped, because I know how he felt when I was growing up. I grew up in the circus being the odd one in the world; I would meet other kids and want to play with them, and they’d be like, “you’re in the circus; that's weird,” because they lived normal lives; so I could relate that Pippin feels trapped.

6. Best story about growing up in a traveling circus:
Oh man, I have so many. I remember one time when we were in Austria, we were staying at a friend’s farm, and my brother and I just finished training and schooling, and we were really into bike riding. I was about seven and he was nine, and we decided we were going to build a big jump and become stunt men. We’d come down the hill, flying off the jump into hay, and he went first. I remember him flying down and flying off the jump and just clashing head first into the hay barrel and sliding into the ground. And him looking at me saying, “it’s your turn,” and me saying ‘I’m not doing that!”

7. My number one fitness rule:
Warm up first because without the warm up comes the injuries.

9. My favorite place in the world is; and when you visit, you should check out:
It would have to be Italy (Rome and Sant'Angelo). And when you’re there, you have to get an ice cream sandwich; it’s ice cream with a pressed, glazed-over bun. It’s the best thing in the world.

10. My first reaction when I saw my Pippin costume:
No way, I’m not wearing that. Nope. You got to make the shorts longer.

See the super crushable Orion Griffiths in ‘Pippin’ at the Music Box Theatre.

Pippin
Best Priced Tickets
Newer
Ohhhhh! Here’s How You Know the Cast of Los Monologos de la Vagina
Older
10 GIFs from The Gentleman’s Guide Music Video That Made Us Happy