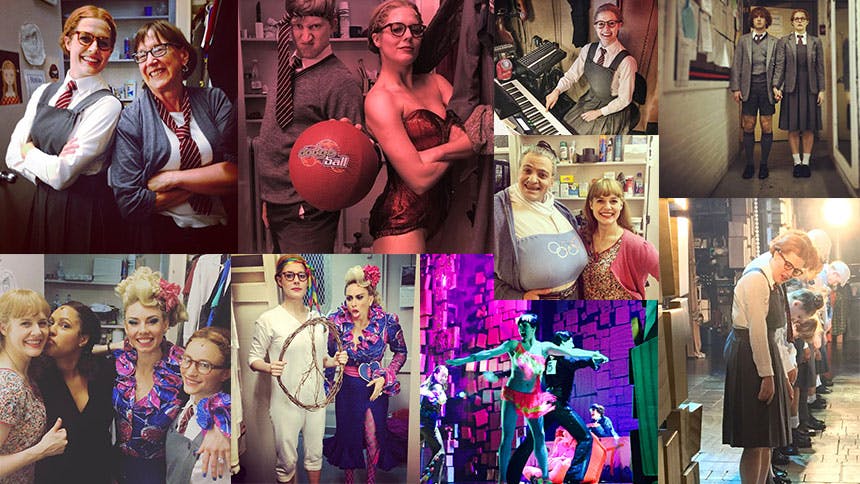 In Matilda, Bowles catches your eye dancing up a storm in the ensemble and breaking your heart as The Acrobat; she also understudies Mrs. Phelps and Miss Honey.

Read on as Jennifer talks life at Matilda, game-changing theatre, and bringing American Idiot to the subways.

1. The moment in Matilda I look forward to every night:
I always look forward to "Revolting Children." Those lyrics are hugely empowering, and I love the explosiveness of the choreography. Plus a confetti cannon buttons the number, so how could you not look forward to a moment like that!

2. Broadway show that changed my life the first time I saw it:
This is totally cheating, but I can't choose just one! I'll go in chronological order: 1. The Pillowman. I saw that when I first moved to New York, and it was the most interesting, spooky, play I had ever seen. Plus, the acting was off the charts brilliant.

2. Exit the King. I was in the front row, and Geoffrey Rush stared me down (for what felt like minutes) right before he delivered a giant beautiful monologue directly to the audience. I was transfixed by his performance and how seamlessly the play juggled humor and mortality.

3. American Idiot. I have to include this one because it very literally changed my life. The music, orchestrations, choreography, and actors spoke to me in a way that no other musical ever had, so it was a dream making my Broadway debut in a show that meant so much to me.

3. My biggest Matilda pinch-me moment has been:
Performing on the Thanksgiving Parade was a huge pinch me moment. Also, playing the role of Miss Honey for my parents and best friends has provided a good number of pinch me moments in the past couple of years!


4. Job that got me my equity card:
In 2007, I did a lovely musical called The Sixth Borough written by Will Reynolds and Eric Price. My roommate at the time, Zach Prince, set that experience into motion, so I have him to thank for my Equity card!

5. Special skill on my resume I'm most proud of:
My impressions of Donald Duck and Gollum are dead on. So, yeah, I'm pretty proud of that. :)

Head over to Broadway's Shubert Theatre to see Jennifer Bowles tear it up in the hit musical Matilda.