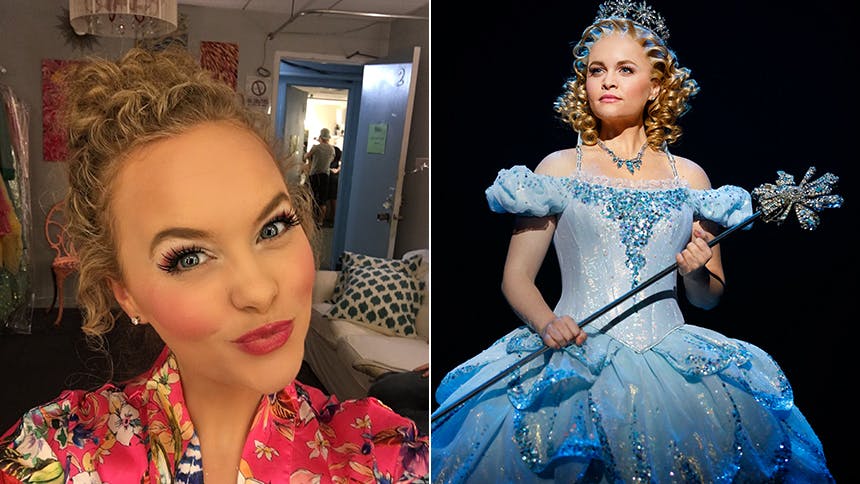 , having previously starred in the musical's national tour where she even played the popular good girl for First Lady Michelle Obama. On screen, Amanda has been seen on Glee, Disney's Jessie, ABC's Selfie, and HBO's Hello Ladies. Scroll on to get to know Amanda as she talks fan interactions, how she keeps her voice ready for Oz, and her passion for giving back.

1. The first time I flew over the Gershwin in the Glinda bubble, I thought:
It was during a rehearsal. I went up and came down while the house lights were still on and I could see every seat. I was thinking, “thank you, God”, “just breathe” and “IS THIS REAL LIFE?!” And of course, opening night was surreal. I’ll never forget that first moment.

2. The biggest way my Glinda has changed through the years:
I think the biggest ways she’s changed for me is in the depth of her understanding of what it is to lay down judgement, stand in integrity, navigate heartbreak, and what it means to forgive. Because those are things that I've walked through in my own life over the past six years, they resonate more deeply as I play her now. I’ve always adored her and had an affection for her joy—that hasn’t changed!

3. The most surprising part of Wicked on Broadway vs on tour:
They’re similar in so many ways but on Broadway the stage is raked, which means it’s on a slight incline, so I’ve had to use my core more to stay stable in my heels. It’s also a very different experience to be living in one place instead of traveling every 2 to 6 weeks. I love them both!

4. City I played during the Wicked tour that I could see myself living in:
We played so many amazing cities! I could see myself living in San Francisco (I looove California and actually lived/worked in LA for four years). And also Columbus, Ohio; specifically German Village, where I stayed. It has such beautiful historic architecture, incredible restaurants, Graeter’s ice cream (mmm) and the loveliest community of neighbors.

5. The first Glinda and Elphaba I ever saw live were:
The originals! Kristin Chenoweth and Idina Menzel, of course. I actually got to see the original company twice. What a gift that was.

6. The most memorable fan interaction at Wicked has been:
Our fans are THE BEST. I am amazed daily by their love and support. They've given gorgeous art, letters that have brought me to tears, personalized hats, birthday video tributes, yummy treats, handmade jewelry, the list goes on. But one memory that I hold dear is meeting nine-year-old Elisha in Charlotte, NC. Elisha is blind and he listened to the show with an audio guide of the onstage action. I got to meet him backstage after and he had the most remarkable spirit, so spunky and full of life, he said: “Miss Amanda, your teacher lady [Madame Morrible] wasn’t very nice to you. Where is she? I’ll give her a talking-to!” He sincerely wanted to defend me/Glinda. It was soo sweet. He wrote us all thank-you letters in Braille, which I still keep to remember my awesome buddy Elisha.

7. The musical that really sparked my love of theatre:
When I was really young my parents took us to our local Great Valley High School production of The Secret Garden. We were fortunate to have a top-notch arts program in our public school system and the shows were always fantastic. I was utterly enchanted that night. I remember sitting on the edge of my seat!

8. Role I played in high school or college I’d love to play again:
Nellie Forbush in South Pacific. I was just a teenager when I did it, so I’d love the chance to go back and sing that score and experience her now—she’s feisty and strong and has a lot of heart. ALSO, Little Red Riding Hood in Into the Woods. I played her at Carnegie Mellon in a production directed by Kent Gash. Kent completely changed my artistic life and understanding of comedy (and how much I loved it) when he gave me that chance. Little Red is inquisitive, quirky, bold and she has a beautiful arc that I’d love to explore again.

9. For me, the key to keeping my voice Glinda ready:
Sleep, steaming with a personal vaporizer or MyPurMist, drinking water like a fish, little to no caffeine, massages (yes please) and voice lessons with Joan Lader (also yes please—she has changed my life).

10. One thing I feel very passionately about outside of performing:
I am passionate about people and their inherent dignity. I support a non-profit in LA called Two Wings, which equips and empowers survivors of sex trafficking for their next chapter in life, to give them a chance at their dreams. It was really cool to come together with my Instagram/Twitter/FB community for my birthday this year—together we raised money for the cause. I've also co-lead a gospel choir at my church in LA, Mosaic, and I love finding different opportunities to serve with cast mates in cities on tour, and now here in NYC. I also do fun weekly Instagram segments called #TheBaeSeries starring me and my “boyfriend” (you’ll see) every Monday—you can follow along @amandajanecoop!