Joel Perez Takes on Seven Questions About The Public Theater, Vision Boards, Shakespeare & As You Like It 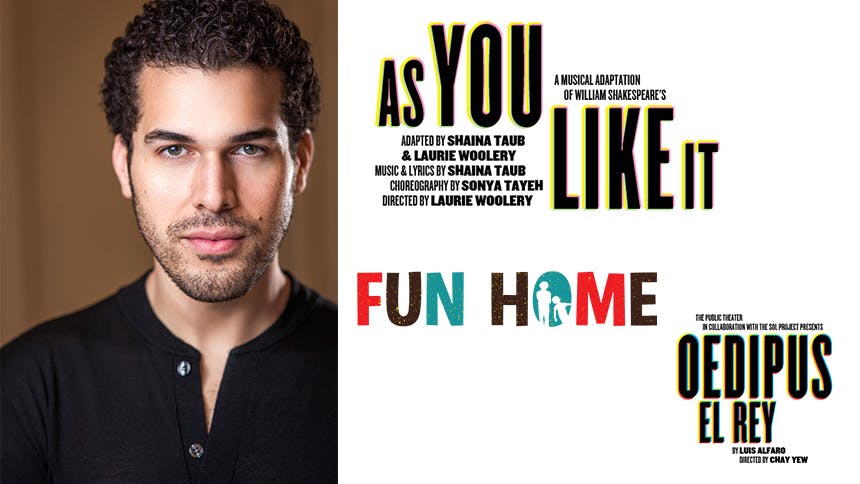 Lortel Award winner Joel Perez broke out as Roy and others in the Tony Award-winning Best Musical Fun Home, which began at The Public Theater. He went on to star off-Broadway in the hit revival of Sweet Charity and the powerful drama Raw Bacon From Poland (where The New York Times compared him to Brando in their review!). Next, Joel stars as Touchstone in the Public Works’ free staging of As You Like It

. The new musical adaptation of the classic Shakespeare comedy runs at the Delacorte Theatre in Central Park September 1 through 5. BroadwayBox caught up with Joel to talk about Shakespeare, his artist relationship with The Public, and more.

1. What do you love about working with The Public?
One of the first shows I ever saw in New York City was The Little Flower of East Orange, a Stephen Adly Guirgis play at The Public. From the moment I stepped into the lobby of The Public, I thought, ‘Wow this place is different!’ It’s such a nexus of all these shows happening at the same time. I always had it on my vision board of New York: I’m going to work at The Public. This is where I want to work. Now, I’m still pinching myself. I can’t believe I actually work here and it’s a place I get to call home. I think [Artistic Director] Oskar Eustis especially pushes for theatre that challenges. It’s not just about entertainment but theatre as a platform and how are we using it to affect social change in our community.
So, what’s still on your vision board?
[Laughs] I have some ideas for writing projects I’d like to get off the ground, and I’d love to be a series regular on a TV show.


2.  What was the first thing you saw that really made you love and appreciate Shakespeare?
Growing up I never had a very close relationship with Shakespeare. I remember reading it in high school and appreciating it for the poetry but I hadn’t really seen it performed. Then in college, I studied abroad in London at the British American Drama Academy, and it was my first time studying Shakespeare in performance. I realized Shakespeare read is very different than Shakespeare onstage. We had the opportunity to go to Stratford and see Patrick Stewart as Prospero in a production of The Tempest. I always saw Shakespeare as stuffy and inaccessible but seeing it performed that way really blew me away. Also, in college at Tufts University, I was exposed to a theatre company, Actors’ Shakespeare Project in Boston, that was really cool. They would do sight specific productions of Shakespeare. They did a King Lear that was really incredible.

3.  This production of As You Like It is going to feature almost 200 New Yorkers. What excites you most about that?
I’ve seen Public Works productions of The Tempest and The Odyssey in the past, and I remember being in the audience of these shows and being so blown away by just the scope of it. In theatre, I feel like we rarely get that opportunity to really fill the stage with so many people. It really becomes this wonderful celebration of New York City. In our cast, we have little kids up to 80 year olds, so it’s this gigantic representation of the people who exist in NYC. It’s incredible to put them onstage and for audiences to see New York represented onstage. That’s such a big part of Public Works’ mission—to bridge the gap between audience and actors—and this is the way to bring the community into the theatre in a way that makes it so much more accessible. They are actually seeing themselves onstage.

Lovely night at one of my favorite places in NYC @publictheaterny #TheTempest @selle_c86 with @repostapp. ・・・ Finally Shakespeare In the Park!!!! Because @misterjoelperez is the best!!!


4. Shakespeare role you’re dying to tackle somewhere, someday?
I’d love to play Hamlet at some point. I just saw the production Sam Gold directed at The Public and it was so powerful. The prospect of playing Hamlet seems terrifying, so that’s why I think I should do it.

5. If we were doing it in Shakespeare’s time, what female role would you want to take on?
Ooooo. Lady Macbeth. I’d love that challenge.

6. Congrats on the Lortel Award win for Sweet Charity! Where do you keep the award?
That was really a shock! It was such a fun production and I was so grateful to be a part of it—to get that kind of recognition was crazy. It’s sitting in my living room.

I Lucille | Got some new hardware in the mail. What an honor. So much love to my #TNGSweetCharity family. #LucilleLortelAwards


7. Tell me about your next project at The Public, Oedipus el Rey—a take on the classic Greek myth set in South Central LA.
Honestly, I’m mostly excited for more New York audiences to be exposed to Luis Alfaro’s writing. He’s such a prolific writer but most of his work has been produced on the West Coast or Chicago. He was a MacArthur Genius in 1997, so it’s bizarre that this is going to be one of his first big New York premieres. I feel really fortunate to be part of a story that has a cast of Latino artists and actors. To take this classic story and reframe it is exciting. I think audiences are going to be moved by the production. When I read the script I thought, ‘This is dope. I hope I get to be a part of it!’


Don’t miss Joel Perez in the Public Works’ free musical adaptation of As You Like It at the Delacorte Theatre September 1-5.