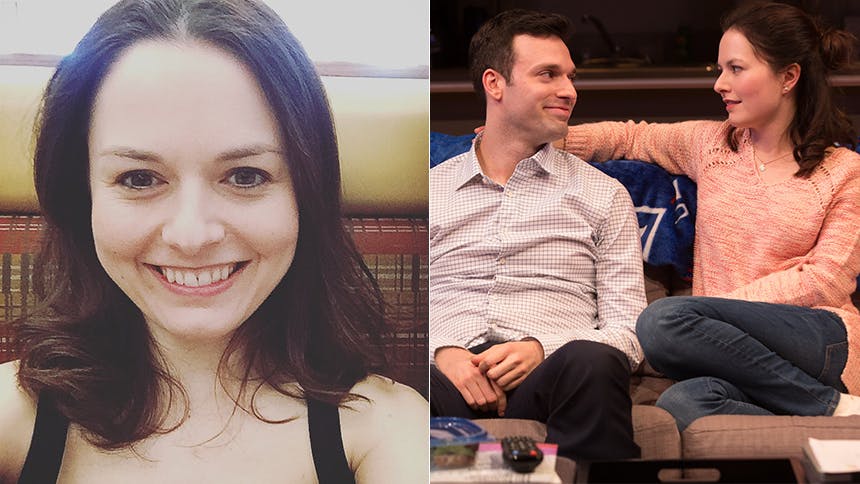 Your heart breaks a little for Jenna Gavigan's character, Emily, in the critically-acclaimed off-Broadway play Straight

. Despite being a brilliant scientific researcher, Emily is unable to see that her longtime boyfriend Ben is living a double life—one as her loving straight boyfriend and the other as a gay man in a passionate relationship with a younger guy named Chris.

BroadwayBox gets to know Jenna Gavigan a bit better as we talk about the show's explosive, polarizing ending, her love of Nora Ephron films, and making her Broadway debut beside Bernadette Peters in Gypsy.

1. Advice I’d like to give to Emily:
Don’t be afraid to listen to your intuition and instincts.

2. Craziest thing I’ve heard after a performance of Straight:
Oh my. I was told an insane story by our director about something that happened in the audience during a performance, but technically I didn’t hear it so… With my own ears, many versions of, “Wait. That’s it?” when the lights go down at the end. A week or so after we opened we had our first performance of: blackout after the last scene and silence until the lights came back up and we were there to bow. The ending to this play is shocking and the audience craves more.(Yes, I just compared us to the final episode of The Sopranos.)

3. If I had to describe my co-stars Jake & Thomas’ personality as drinks, they would be:
Jake: a tall beer. Tom: a Gin martini because, to quote him, “Vodka is for garbage people.”

4. Favorite memory I’ve made in the city of Boston:
I’ve taken two trips to Boston. One was a class trip in the fall of the seventh grade. I wore those trendy-at-the-time Abercrombie wind pants and Old Navy puff vest and stupidly thought I’d be warm enough. The other was in late spring when I was doing Fame at North Shore Music Theatre and the cast took a day trip to Boston. It’s a beautiful city. Would love to work there.

5. Movie I love so much I know every word:
It’s a tie between When Harry Met Sally and Sleepless in Seattle. Okay, fine. And You’ve Got Mail.

6. Stage or screen performance I feel most inspired by as an actor:
Watching Bernadette in Gypsy was the most awe-inspiring experience I’ve ever had in the theatre. If you haven’t seen her 2003 Tony performance, get thee to YouTube immediately. She’s the definition of “bundle of dynamite.”

7. As an Insta Foodie, my signature dish has to be:
I cook mostly Italian food because the half of me that’s not a Gavigan is a Gagliardi. I make homemade gnocchi a lot. I’d say it photographs nicely.

8. Best story I have from my Gypsy experience on B’way:
Well, let’s just say the memories could fill a book. It was a dream of an experience. The first time I went on as Dainty June stands out. I remember Brandon Espinoza whispering “go!” as we were starting the transition from kids to adults in the strobe light, the feeling of landing in our formation at the end of that transition—literally both hands up, centerstage, huge smile—and then it was all a whirlwind until I came offstage after “If Momma Was Married.” The kids and a few of our adult cast members swarmed me and I immediately burst into tears. Meanwhile, in the audience (aside from Paul Newman and Joanne Woodward in the fourth row) sat my ever-supportive family. Apparently my ninety-year-old Great Aunt (my grandfather’s sister) turned to my mom and said, “If Pop were here, he’d shit.” I went on to play the role for 43 more performances and each was an absolute joy. Singing “Broadway, Broadway” onstage at the Shubert in my Broadway Debut? It doesn’t get much better than that.

9. My most-played musical theatre album:
I spent a lot of time belting songs in my mom’s Camry: Guys and Dolls,Les Miz, Crazy for You, Thoroughly Modern Millie, Chicago… Not to brag, but she had a six-disk changer.

10. I have been known to totally nerd out over:
Who Do You Think You Are on TLC and Finding Your Roots on PBS. I’m trying to become famous in the hopes that I’ll be asked to be on one of these shows. I’m obsessed with ancestry.

Don't miss Jenna Gavigan (and her guys) in 'Straight' at off-Broadway's Acorn Theatre, now through May 8.

Straight
Best Priced Tickets
Newer
Hot Clip of the Day: Feel the Joy of Spring with "Whoa Mama" from Bright Star
Older
A Look Back on the Other Eight Pulitzer Prize-Winning Musicals That Join Hamilton in History
Sign up for BroadwayBox Discount Alerts