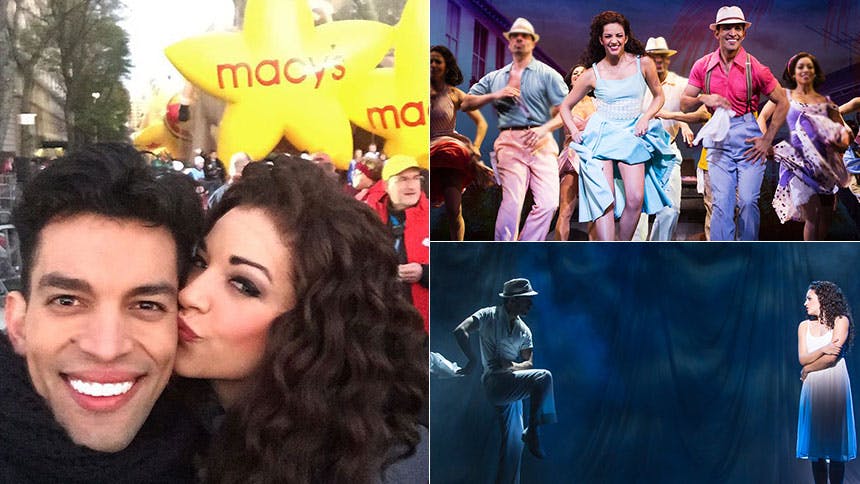 If you've seen the hit musical On Your Feet!

, your eye has landed on Carlos E. Gonzalez—the mega magnetic dancer who is tearing it up over at Broadway's Marquis Theatre. Gonzalez, who serves as the musical's assistant dance captain, makes his Broadway debut in this bio show about the Estefans.

BroadwayBox gets to know this captivating performer a bit better as we talk growing up in Cuba, his interest in photography, and the Cuban espresso that keeps On Your Feet! moving.

1. Moment in On Your Feet! that brings me the most joy:
The opening number is the most exciting moment. The second the curtain goes out, I get to see the audience and be in a concert setting with them. But the part of the show that brings out the most joy in me is definitely "Tradicion." In the show, we are transported to Gloria's childhood neighborhood in Miami, and the number has a community that feels like home to me. Even the challenging dance steps feel easy and joyful to do, because I'm dancing to a song that I've heard my whole life, and that has meant so much to me.

2. My most cherished memory from opening night of On Your Feet!:
The bows! Since rehearsals began, over a year ago, I was so focused on doing my absolute best that I didn't stop to register what was happening. At the end of the opening night show, I had just made my Broadway debut. I saw my mother in the audience crying tears of joy, and the second I left the stage I broke down also. I realized that this moment was a dream coming true for her as much as it was for me. It's something that never would have been possible for me to achieve if she had not left Cuba when I was young.  I'll never forget that moment.

3. The Estefan song that speaks to my soul:
"Cuba Libre" I still have family and friends in the island. Every night when I get to sing the words "Quiero mi Cuba Libre, pa' que mi gente pueda bailar,"  which translates to " I want a free Cuba, so that my people can dance," it reminds me of the difficulties they still face, living there. I feel that music is one of the strongest ways we have to cross this divide.

4. My most distinctive memory of my childhood in Cuba is:
I loved my childhood in Cuba. Playing baseball barefoot on the streets, and climbing mango trees, will always have a special place in my heart. I always try to remember that little adventurous boy.

5. My favorite photograph I’ve taken has to be:
Any picture of my sister. We're fifteen years apart. Since the day she was born, I haven't stopped photographing her. I would test every piece of new equipment I got on her. She really is the best model and makes my photography look good.

6. One secret about life at Fuerza Bruta:
That is another family that I had the pleasure to be a part of for a bit. One secret perspective I love is seeing the 'pool' from above. The audience is blown away when a pool lowers from the ceiling over their heads, with incredible lighting. However, as a cast member, I got to look from above and see the smiling faces of the audience through the pool, thrilled by the experience.

7. Movie I love so much I know every single word:
Vicky Cristina Barcelona. I can't get enough of Penelope Cruz.

8. Album I completely wore out in college:
I can't really say I had one. I'm pretty open when listening to music.

9. I have been known to totally geek out over:
I love every single film by Pedro Almodovar. I'm a visual person, so even when I know the plot of a movie from seeing it so many times, I don't get tired of watching how he composes each shot. I always make my friends watch his movies with me to appreciate his artistry.

10. Most important thing I do for myself to maintain dancing this show eight times a week:
My Cuban espresso. I haven't done a show without "cafecito." We have a tradition to make it in the dressing room every night at half hour. Now one of my cast mates and I have started a tradition of bringing "cafecito" to other Broadway shows. You can follow us on Twitter @guajirosonbway.

Head over to Broadway's Marquis Theatre to see Carlos E. Gonzalez in 'On Your Feet!'

On Your Feet
Best Priced Tickets
Newer
Hot Clip of the Day: Celebrate Tony Yazbeck's Arrival in Neverland with This Kiss Me, Kate Stunner
Older
David Korins Gets Us Uber-Excited for Grease: Live Via His Peachy Keen Instas
Sign up for BroadwayBox Discount Alerts