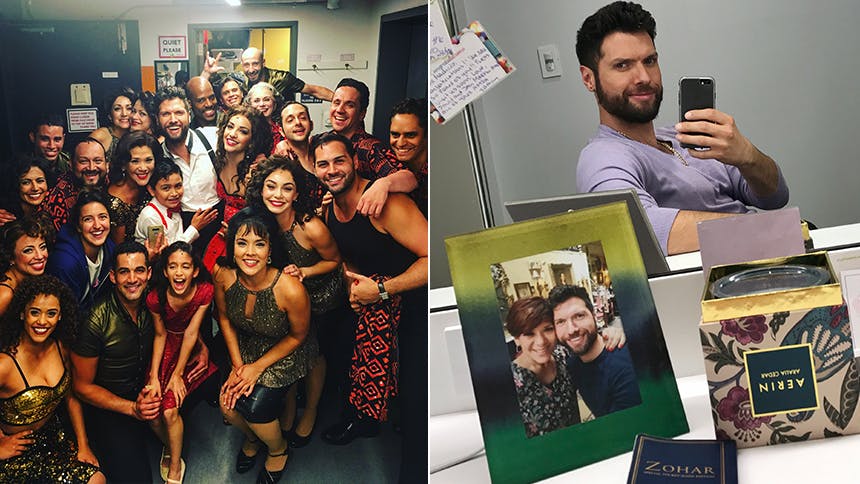 Mauricio Martinez makes a smashing Broadway debut as Emilio Estefan in the hit bio-musical On Your Feet!

. After the Broadway run concludes in August, the Mexican stage and screen star launches the show's national tour, bringing his Emilio to a city near you. BroadwayBox caught up with Mauricio to talk about taking the Estefans' story home to Miami, what's in his suitcase, and the iconic dream role he wants to play for his mom.

1. The role of Emilio first came on my radar:
The first time I heard about On Your Feet! was when the casting director emailed me and my manager in Mexico last summer. I was living in Mexico City at the time and about to come do a show at the New York Musical Festival. I was invited to come see the show and audition for the role of 'Emilio Estefan'. Of course I knew who he was...and it was beautiful to see him portrayed on stage. But I have to say, when I read that amazing monologue by the show's Oscar-winning writer Alex Dinelaris —when Emilio tells a record executive about his journey from Cuba to Miami— something just clicked inside. In my heart. I related 100% with that. It brought tears to my eyes. I knew in that moment that I wanted to play the role.

2. My first distinct memory of hearing Gloria Estefan was:
I remember I was about 5 or 6 years old when 'Conga' first came out. Who didn't dance to this song? I never really knew what it said, so I would just sing something like "nono para para para con la conga!"... A few years later I started watching MTV and Gloria's videos would come on, and I was always in awe that somebody else lived like me: in both languages! English and Spanish! Her songs and videos would have both versions! I loved that. And her voice. And those ballads...she blew me away. I grew up listening to her and loving her music.

3. The most surprising part of this process has been:
I have to say that joining this company has been an incredible experience! They are all so talented and such nice people. I was friends with Doreen Montalvo (who plays 'Gloria Fajardo') and David Baida (who plays multiple characters beautifully) because we had done a concert together last year in NY, but I didn't really know anyone else in the company. And they've all welcomed me to their company and to a show they really love (and that most of them have been doing for quite some time) with such kindness & open arms...that it was impossible not to fall in love with them instantly. Ana Villafañe (who created the role of Gloria Estefan) is truly wonderful and we hit it off right away. She and the rest of the company have taken great care of me, and I am deeply honored of being their new leading man on Broadway. It's been a beautiful surprise. I don't feel homesick. They feel like home.

4. When I’m packing a bag, five things I know I need:
¡Ay, Dios! Why just five? Hahaha... I always forget my toothbrush so that's now like the first thing I pack. So there's 1. I also always carry a picture with my father (who passed away 16 years ago) that my brother took of us walking in New York 20 years ago—when I first came to study musical theater. That's 2. I've studied Kabbalah so there's this pocket size Zohar that I like to take with me for protection. That's number 3. I can't leave without my phone charger; smart phones have become an extension of ourselves...it's scary. So there's the fourth thing. And my passport, of course.

5. The tour city I am most looking forward to visiting:
I'm very excited to go to Miami to launch the national tour. I think that On Your Feet! has three lead characters: Gloria, Emilio Estefan, and the city of Miami. So I'm excited to see how the audience receives this show that in a way pays tribute to all of them. Miami is where it all happened: that's where Emilio & Gloria met, where she joined his band...and it's where they continue to live. This city plays such an important role in this show. And so does Washington. I'm excited to go there, too. I've never been and I think it's important to say these words and deliver this beautiful & powerful message in this nation's capital.

6. Three things I love about life on a telenovela set:
I haven't done a telenovela in a few years but it's pretty much the same as shooting a TV series. I just wrapped season 2 of El Vato, NBC Universo's first original scripted series (which premieres on the US on August 27th), and we spend so many hours together on set, waiting...so I love how tight the cast & crew have become. We get to talk and talk for hours. When it's an early call, we all get together and have breakfast and I love drinking coffee. Those cold mornings really warm up with coffee & friends. I sometimes also love being in my camper by myself, reading a book, resting...and studying. Running lines with another actor in makeup is also fun.

7. The musical theatre role I’m dying to play someday:
I recently played one of my favorites, which is 'Che' from Evita. But my mom's favorite show is Phantom Of The Opera. I mean, every time she comes to NY, she goes to see it. I always tell her, "Mom, there's this new show and this other one!" And she always chooses Phantom first. And every time she walks out of the theatre, she says, "I can't wait for you to be the Phantom". So I would love to play that role, which is so iconic, and get to see her face when she sees me with the mask on. After all, I inherited the love for arts & music from my mother. She is a painter and she's a fan of movie & Broadway musicals; growing up I would go to her studio to do my homework as we listened to music or watched a movie musical while she worked on a new painting. So playing that role on Broadway would be a beautiful way to honor her and thank her.

8. My signature dance move is probably:
I played Tony Manero 14 years ago in the Mexico City production of Saturday Night Fever, and ever since then those moves just kind of stayed with me! You know that "Travolta" walk? That is it. So when I do concerts or even now as 'Emilio' in the mega mix of On Your Feet!, when I can dance, I catch myself waking ala 'Tony Manero'...I don't think about it, it just happens. And I just smile when I catch myself doing it.

9. My most memorable audition story:
I think now that I look back, it has to be when I was chosen to play 'Beast' in Beauty & The Beast in Mexico City 10 years ago. The director told me (after I got the role) that they wrote "Miami Beast" on my audition sheet the minute they saw me (I had just returned from the beach so I had a tan and also my hair was long and curly). I wasn't going to do the audition cause I didn't think I would get cast. They had asked me to audition for 'Gaston' but I had just done a similar role and I wanted to challenge myself more so I was going after 'Beast'. But I didn't think I was tall or big enough. (I was used to seeing Beasts on Broadway who had bodies like football players!) So I walked into the audition and did the scene...and they asked me to stay. And then I started to sing. I was asked to sing "If I Can't Love Her" in Spanish. Halfway through the song I got so into it that I blanked out and I switched languages and did the second half of the song in English without realizing it! That's how I had learned it (I sold merchandise at the Palace Theater when I was a student here in NY 20 years ago, and that was the first song I worked in musical theatre class)...so it just came naturally to me. I realized I had switched languages at the very last note. I opened my eyes widely and stood there in shock...but didn't break the moment. After I got the role the music director told me that when I opened my eyes in shock I looked exactly like the Beast does in the animated film when he sees Belle in the yellow dress. I always smile when I look back at that audition. It was a very special role for me.


10. One thing I totally geek out over that has nothing to do with the arts:
Cooking and food. I love cooking and discovering new places to eat; tasting new dishes. I've also been obsessed with pretzels ever since I was a kid. I don't know why, but if I have them in front of me, I know they'll be gone in a matter of seconds.

You only have until August 13 to see Mauricio Martinez as Emilio Estefan in Broadway's 'On Your Feet!' at the Marquis Theatre, but then you can catch him on tour.