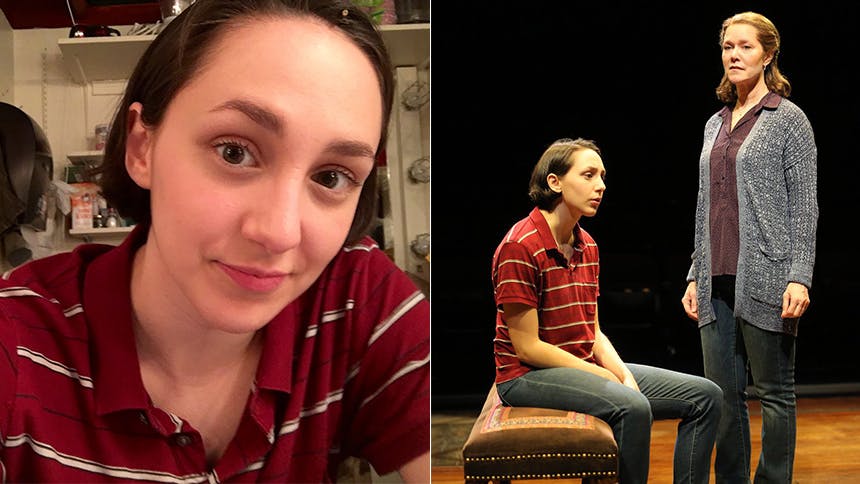 as the standby for Medium Alison since its Broadway beginning, and now the role of college-aged Alison is all hers (until May 22) and she's knocking it out of the park. Eager to learn more about the actress making her Broadway debut, BroadwayBox caught up with Patten to hear about life on Maple Avenue, the awkward characters who give her life, and some wise Yogi advice.

1. For me, the most important part of my Fun Home pre-show process is:
Getting into my tighty whities, and Cinnamon Apple Spice tea from Celestial Seasonings.

2. My approach to "Changing My Major” is:
Singing this song is like buckling myself in for a roller coaster ride. Alison is constantly oscillating between elation and fear, embarrassment and pride, confusion and discovery. My only aim is to follow the thoughts as they come and let myself get caught up in the whirlwind. So that, and not slipping and falling in those knee socks.

3. The scene in Fun Home that’s most fun and the scene that is most challenging are:
The Colette dorm room scene is possibly the most fun scene ever, in any show. I never know what Roberta is going to do, or how the audience is going to react. It doesn't get better than that. The second half of the show is challenging because I have to keep my emotions in check. As a person, the Beech Creek scenes get me teary, but Alison doesn't process it that way. It would be weird to have Alison crying on stage.

4. Awkward TV or movie character I just love to death:
So many!! Duckie from Pretty in Pink. Ron Weasley from...Harry Potter (duh doi). Abbi from Broad City. George Michael from Arrested Development. I can keep going...

6. Show that rocked my world in a major way the first time I saw it:
There's a lot of theatre experiences that come to mind with this question. Sitting enraptured at Les Miserables as a kid; Hamlet at Rubicon Theatre in California, when I finally understood Shakespeare's language; seeing Mark Rylance on stage for the first time in La Bete. Seeing Red with Alfred Molina and Eddie Redmayne was one of the most ecstatic nights I've ever had in the theatre. The scene when they prime the canvas! Gives me chills thinking about it.

7. One thing everyone who is starting out in yoga should know:
You're going to feel like a doofus for a bit. No one is looking at you, and you don't look as silly and uncoordinated as you feel. Stick with it for a while—I promise it's worth it.

9. If I could teleport to anywhere in the world right now, I’d go to:
Pick a place on the map. I'm a big dreamer about travel—I'll go anywhere. But really, I'd probably just teleport to my sister's house so I could read my nephews a bedtime story.

10. The most surprising thing about this Fun Home experience has been:
That after spending six days a week with the same show for over a year, I've never once felt stagnant or bored. I'm genuinely excited to get back to the theatre on Tuesday nights. This excellent material, and this beautiful company: it never gets old. There's something new and joyous every day.

Don't miss your chance to see Lauren Patten as Medium Alison in 'Fun Home' at Broadway's Circle in the Square Theatre through May 22.

Fun Home
Best Priced Tickets
Newer
Hot Clip of the Day: Start the Day with Some Rodgers & Hart By Way of Travis Moser
Older
You Have To See These Hilarious Backstage Videos of Marisha Wallace & the Cast of Something Rotten!
Sign up for BroadwayBox Discount Alerts