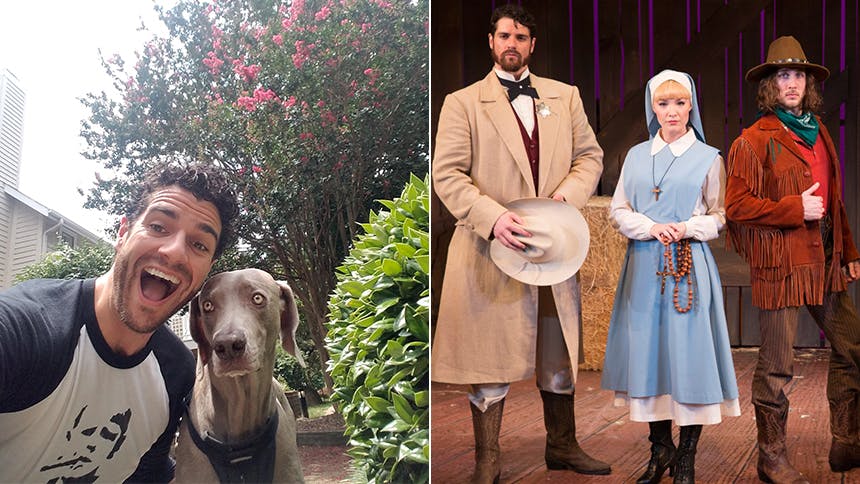 . The off-Broadway musical is a Wild West take on Shakespeare's Measure for Measure, and Peter's Sheriff Green is a morally stand-up guy who finds himself teaming up with saloon girls, blackmailing government officials, and falling in love with a very special nun. BroadwayBox gets to know Peter a bit better as he talks about his journey with Desperate Measures, living around the world, and some former favorite roles.


1. Is there a scene or moment in Desperate Measures that brings you to the brink of breaking onstage more than the others?
Not unlike a solar eclipse, I must never allow myself to look directly at Gary Marachek while he's playing the Bartender in Wild Will's Saloon. In fact, I'd recommend bringing special glasses.

2. How did you go about building Sheriff Green? Who were your inspirations while finding this Wild West sheriff?
Like any piece written with this much precision and wit (shoutout: Peter Kellogg) the clues lie in the text. We learn early that Sheriff Green is a pragmatist, an observer, and a man of intelligence. All of this sits perfectly with the classic image of the "Wild West Sheriff" —quiet, eyes peeled. It's a fun framework to play in. I started from scratch and didn't really base him on anyone, but I guess after all this time, I'd maybe say Clint Eastwood...if he could sing and discovered a love for iambic pentameter.

3. How has your performance in Desperate Measures changed or grown since the initial run at the York?
The Sheriff has found even more stoicism and stillness this time around. We're finding a lot of mileage with this deadpan take—both with the comedy, and the storytelling. Our approach is almost vaudevillian and it's brilliant to see audiences literally throw their heads back with laughter.

4. Where in New York do you feel most at home?
You know, I moved here for the first time 12 years ago. New York truly is my home and I'm very proud to be an Australian living here. I tend to feel most like I'm in Australia when I'm in my friends' homes. Maybe it's just the feeling of being with my community that reminds me of family and friends in Australia.

5. Tell us a memorable audition story.
I was once asked if I had any acrobatic skills, and I said that I had a "mean forward roll". I was then pushed and pushed to demonstrate this "mean forward roll" in front of my group so I crouched down, did the ugliest, most rudimentary forward roll you're ever seen, and then I growled like a baby tiger.

I didn't even get a pity laugh...fair enough.

6. What’s your favorite memory of touring internationally with Cinderella as the Prince opposite Lea Salonga?
I was completely out of my depth. I was wide eyed and bewildered. Our first press conference at the CCP in Manila was attended by dozens of outlets and there were cameras and microphones everywhere. I was shaking and sweating and I will never forget that Lea literally held my hand as we answered the first few questions. She's a fierce and kind friend.

7. You starred as Bob Gaudio in the Vegas production of Jersey Boys. Is there a place you loved while you lived in Vegas that locals know but tourists might not?
I spent as much time as I could hiking with my dog on Mt. Charleston. It was heaven! Cool in the summer and covered in snow in the winter. We would just go up there and get lost for hours. I just daydreamed for ten minutes telling you about it!

8. If you could do any role on your resume again for one night, which would you choose?
Berger in HAIR. That contract at Sacramento Music Circus remains the most powerful experience I've ever had as an actor. I'd love to do it again because I think the country needs the message even more now than it did...y'know...pre-2016.


9. You’ve lived in so many cities around the world? Which is your favorite and why?
Check your gag reflex—New York City.

It's the only place outside of Australia that I've ever truly called home. It took me a long time and a lot of blood, sweat, tears and money to be able to be here and pursue my career and I'm ever grateful. And so SO proud.

10.  What are three pieces of advice you’d give wanderlust who wants to live abroad but doesn’t know where to begin?
1. Find something you're passionate about.
2. Work hard to better understand it/be involved with it/learn to do it.
3. Say yes. Don't judge opportunity when it comes by. The universe knows better than you do.