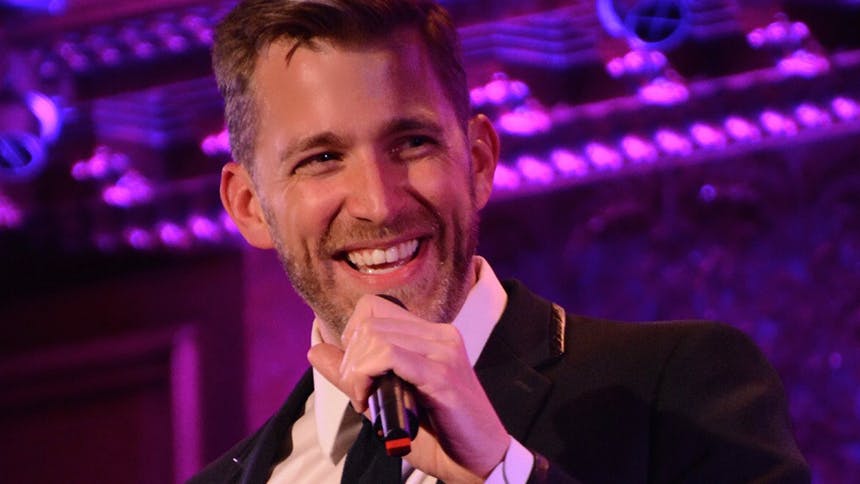 Benjamin Eakeley is back by popular demand! Following his sold-out engagement of Broadway Swinger, the alum of Broadway's She Loves Me, Cabaret, On a Clear Day, You Can See Forever, and Sweeney Todd is back at Feinstein's/54 Below on August 14 with Broadway Swinger, Vol. 2: Songs of the 1930s, in which he swings through the Golden Age of American song with his jazz band featuring piano, bass, drums and trumpet.


In anticipation of the one-night-only concert event, Ben shares with BroadwayBox five of his favorite swing arrangements of Broadway showtunes.

Blossom Dearie, “The Surrey with the Fringe on Top” (The Jack Paar Show, 1961)


AAAAAAAAHHHHH! Blossom Dearie is one of my favorite jazz artists of all time. I would listen to her sing ANYTHING. Her orchestrations are meticulously suited to her voice, and her musical taste is impeccable. I am particularly drawn by the cool, easy swing of this performance on The Jack Parr Show. Every instrument here—bass, piano, snare drum, voice—is an equally important part of the rhythm section, and together they allow Oscar Hammerstein’s lyrics to shine. This is a beautiful, intimate arrangement that really draws the listener in. And it’s a wonderfully refreshing take on this song, which was originally written with pomp and swagger to encapsulate Curly’s masculinity. Here Blossom Dearie seductively advertises the art of the undersell. And I totally buy it!

Jessie Mueller, “Every Night at Seven” (On a Clear Day, You Can See Forever, Broadway, 2011)


I have to admit a little bias here, as I play the radio announcer who introduces the song in this clip, and I also sing backup for Jessie in this arrangement. I am so proud of our short-lived revival of On a Clear Day, You Can See Forever. “Every Night at Seven” brought down the house at the St. James Theatre every night (at Ten). It’s a shame that we never recorded the show, but fortunately a few clips like this still exist to show off Larry Yurman’s brilliant arrangement, Doug Besterman’s fantastic orchestration and of course Jessie’s unbelievable vocal. It was such a treat to sing this song with Jessie—I adore her as both a person and an artist, and I’m so proud to have been there at the moment she arrived in New York with such a bang.


“Lulu’s Back in Town” was written for the film Broadway Gondolier. But I’m counting it as a Broadway tune because in the 1930s, film was the primary way theatrical music reached American audiences. (I’ll tell you more about this in person at Broadway Swinger on August 14.)

I really like Mel Tormé’s 1967 take on “Lulu’s Back in Town.” This is a great 1960s arrangement—just listen to all that brass! And the faces Mel Tormé makes are pretty swell. But my favorite part of this number begins at minute 1:35. He uses a musical pedal point to take us to a bridge that’s just bonkers. And then the arrangement takes off like a rocket ship shooting into outer space. It’s a great example of how cabaret gives the artist license to reinterpret music and ultimately allow the audience to experience a well-known standard in a completely new way. Anything is possible!


And I think the 1969 Sesame Street version of “Lulu’s Back in Town” is a brilliant contrast to the Mel Tormé version above. The Muppets tell the story VERY well!! It is dramatic, dynamic and hilarious. This Lulu is a force to be reckoned with.

In Broadway Swinger, Vol. 2, I introduce the audience to the two competing popular musical styles from the 1930s—sweet music and swing music. Sweet music had great orchestrations but was unlikely to interrupt your dinner conversation (think of Ray Noble’s 1934 “The Very Thought of You”) and swing music would likely have led you to flip over the dinner table to make more room to dance (think of Louis Prima’s 1936 “Sing, Sing, Sing (With a Swing).”

“Ten Cents a Dance” was written in 1930, and this 1955 arrangement has elements of both sweet and swing music. It has a classic big band sound with a lush orchestration and brass stingers that really grab our attention. The most fascinating part of this number to me, though, is not the orchestration, but Doris Day. I love how strong her physicality is throughout the song and what a contrast this is with her sweet voice. It’s a really compelling juxtaposition.

Side note: I’m singing “Ten Cents a Dance” in my show on August 14, but don’t worry—I leave the black fringe dress shimmying to Doris Day.

I know this is a link to an audio recording, but I challenge you to close your eyes and experience swing music the way most Americans in the 1930s were first introduced to it—by listening to it! And there’s no better swinger out there than Ella Fitzgerald. This live recording, from her 1960 concert in Berlin, is pretty perfect. Fitzgerald sings with amazing clarity, and the simple A section gives way to more elaborate B and C sections. The arrangement is infused with an infectious bounce. I dare you to listen to this recording without a big smile on your face. I listened to this album nonstop when I got my driver’s license in high school, and her masterful arrangements left a big mark on my musical development.


OK, so this one is technically neither swung nor a Broadway tune. But it deserves special mention for Ethel Merman’s outstanding dance moves. I may borrow some of them at Feinstein’s/54 Below on August 14!