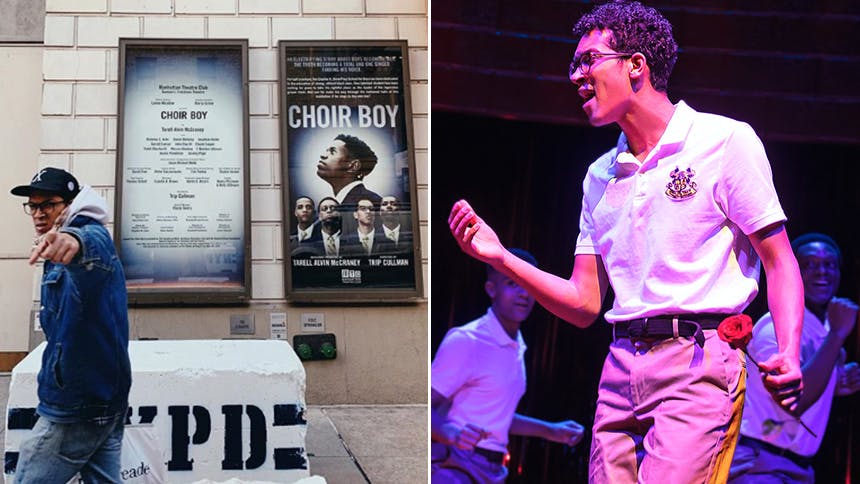 . Caleb played David in the play's West Coast premiere in 2014, and now returns to the role for the Broadway run.

Scroll on as Caleb talks about playing this complex character, creating his own music, and the honesty in Tarell Alvin McCraney's Choir Boy.

1. What struck you most about Choir Boy the first time you read it?
That it was mostly young, black men, and it gave a snapshot of life that isn't often depicted on stage. The characters were incredibly rich. I read for AJ when I first went in for it (back in 2013), and I had just as much enthusiasm to try to see what I could do with that character as I did for when I finally went in for David. Every character is just super rich and has something to give and something about them to discover. I thought that was really awesome. I remember when I finally did go in for David, it was really easy to connect to him because of just how rich the words were. I think that stood out to me the most.

2. What’s the biggest challenge playing a character with as many layers and internal conflicts as David?
It's about your balance. It's about finding the beats and the moments that are truthful but not obvious. I depend a lot of Jeremy Pope (who plays Pharus) to share those moments with me. Trip [Cullman, the director] and Tarell [Alvin McCraney, the playwright) were really instrumental in making sure these things happen—having these moments together that if you see them, you see them and if you don't, you don't.

3. How has your performance changed or grown since the Geffen Playhouse run in 2014?
Personally, when I first played David, I was younger and was just a different person, in terms of faith and religion. Now, that's changed a bit for me, and I just have to access it in a different way. Also, I think I'm a little more confident in what I'm capable of. And honestly, something I'm still working on is being okay with the things I struggle with. I've gotten better at it but I'm not the best at it yet. I get frustrated with myself easily, as I think a lot of actors probably do. I have a tendency to beat myself up if something doesn't go the way I think it should have. And I think I'm at a place now where I'm better at managing that than I was five years ago. I'm just a different actor now. I think that's the biggest change. You get older, you get wiser. You just figure out smarter ways to go about things.

4. What’s the most striking thing Tarell Alvin McCraney has said to you about David?
Tarell expresses his ideas and they just sit with you and ruminate. I just try to put that into how I do the play. Tarell has shared with me that people are complicated, and people often do things before they have a chance to think about them—and a lot of those things, aren't the best things. I think that's maybe what I gleaned from Tarell. His characters are rich in a way that are honest.

5. Who was your first call when you found out you’d make your Broadway debut with Choir Boy?
My mom. Definitely.

6. What’s been the biggest surprise so far of this experience on Broadway?
Biggest surprise? Probably that the Clintons were at opening night. That was pretty crazy! I never would have thought I'd show my bare ass to the Clintons…twice. That was pretty cool. Then I got to do my song twice. The show had to stop on opening night, and I just got to do my “Love Ballad” song twice.

7. What’s your favorite thing about performing the “Love Ballad” scene in Choir Boy?
The togetherness of singing with my guys in the background. Every young performer's dream is to do something like that on a Broadway stage—to do something so cool. I definitely spent days and nights singing in my room to those kind of songs, imagining I had all these nice dance moves to along with it with people backing me up. That's the best part. It's just so uniform. We worked really hard to get everything smooth. It feels so cool.

8. If we were to listen to only one track off your album Songs in the Key of Solitude, which you suggest and why?
Probably "Fall Into You." That was a single, and it was the single for a reason. That's a good all-around song that anyone could enjoy. It's got a good groove and it's soulful.


9. How did growing up in San Francisco in the ‘90s and early 2000s influence you as an artist?
As far as the Bay was going, there was a heavy local scene that I, honestly, didn't really get hip to until I was a bit older. Most of all, it's just the energy and pride that comes with being a Bay artist. I'm super proud of where I come from. Even though I feel a distance because I left San Francisco early, there's just this sense of pride that Bay artists have about them that I definitely carry with me. There's a groove and a feeling in my music that I feel can get a hint of where I'm from.

10. Tell us a memorable audition story.
It was for a musical that did really well recently. It was for an old musical revival, and I went in, and I'm not really a musical guy. I can do a few dance steps but I'm not the strongest dancer. So, I don't have a lot of experience auditioning for them. I had to learn this song and I had to do a scene, going into the song. And I didn't give myself a lot of time to learn the song very well. But what I did learn of it, I learned it a certain way. Long story, short, I get into the room. I do the scene. It's okay. Then I start doing this song. I had rehearsed it with an intro, but the pianist didn't play the intro. So, there was this moment of just staring at each other, like a weird standoff.

So, he calls me over. We go over it. I start singing in the wrong key. It's terrible. The director is looking at me like I'm nuts. I look at him and I'm like, "I am so sorry. This is, maybe, the worst thing I've ever done." He's like, "All right. It's cool. I mean, do you even sing?" And I'm like, "Yes, man. I'm a musician. I sing. I promise." He's like, "Okay. Sing. Just sing anything. Sing a song you're comfortable with." So, I ended up singing “Just Friends” by by Musiq Soulchild. I leave, and I'm like, "Oh my God! That was the worst thing I've ever been a part of." Then the guy who works for the casting agency comes out and says, "That was great!" I was looked right at him like, you’re just going to lie to my face right now?! Everybody in that room knows that that was the worst audition anybody's ever had. And that was that. I did not get that role...as I shouldn't have—I didn't deserve that role.