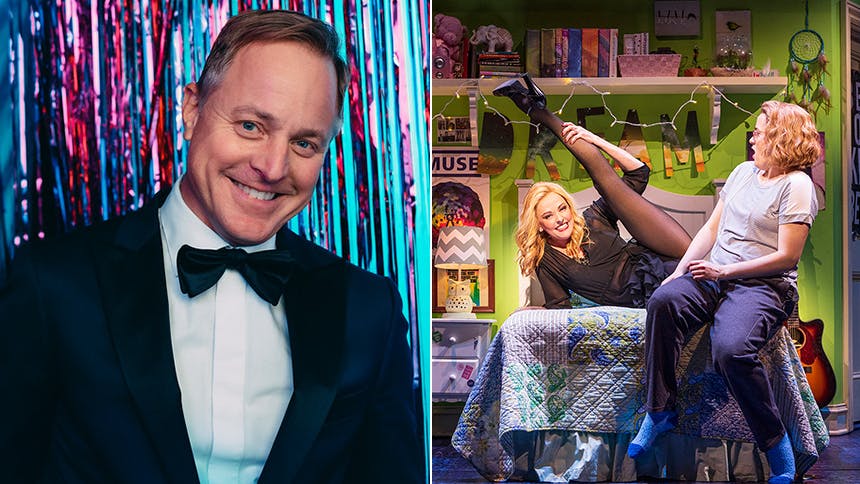 As anyone who has seen The Prom can attest, Scott and his team knocked it out of the park creating a pitch perfect bedroom for 17-year-old Indiana teen Emma. The set dressing of Emma’s room offers audiences so much insight into who this young woman is at her core. Through books, posters, and more, you learn about what matters to Emma and what pop culture touchstones helped shape her into the person we see in the show.


BroadwayBox caught up with Scott Pask to hear from him about populating the world of Emma’s bedroom and the Easter eggs hidden in plain sight for eagle-eyed fans.

Where did you start with populating the world of Emma’s bedroom?
I started with research, newspapers and great books about juvenile bedrooms from art photographers that have documented their children’s bedrooms. It has to be absolutely current or it looks dated immediately. So that’s why it was really important that the details get nailed down with an incredible level of specificity. I looked a lot at the Pottery Barn Kids catalogue, which was incredibly helpful to navigate the color palette for kids and young adults. Emma for me always started with this celadon green color, that is sort of gender neutral. She probably claimed her space in her grandparents’ house and created a room that she liked and that was not prescribed. So we start from there and then populate it the way that she would. What is her dream bedroom? She’s not living with her parents and this is a haven of sorts and it was important that it reflects her honestly.

So where did that next phase start?
It started with something she’s probably had for quite a while, her whole set of Harry Potter books on the shelf. Then her dreamcatcher that’s pinned to the wall and her poster of Riverdale—which my nieces are obsessed with so that aspect is for them a little bit. There’s a poster on her door that says “Be Your Own Kind of Beautiful” and that was an important one. Then I wanted to have her own love of music reflected there. I spent time with Caitlin [Kinnunen, who plays Emma] and discussed with her when I would add things and ask if this is something she’d like or if this was an Emma thing. It was a great conversation to have and a dialogue that kept going. I wanted to hear her point of view.

It’s easy to see these big things in the set like the Lady Bird poster or the Harry Potter collection, but what is something super small in there that we are missing?
There’s a pretty obscure singer, Courtney Melba Barnett, and we put a poster of her off in the corner there. She’s an Australian singer-songwriter known for her witty lyrics and a deadpan singing style. I chose it because as a singer-songwriter I felt that she would be not only on Emma's radar but that she would be a fan/inspired by. She’s an artist who speaks to finding your identity.

What on the set feels most personal for you?
I put a lot of stickers on things. It’s something I remember doing and so I put stickers on books covers and Emma’s guitar. There’s a terrarium up there that I always said, “That’s where she’d have her hermit crab,” and that’s because I had a hermit crab when I was a kid. But overall it wasn’t about putting myself there; it was about putting my care for her there. It’s a reflection of my thoughts about her.

See all of Scott Pask's brilliant design in The Prom at Broadway's Longacre Theatre.