Five Burning Questions with On Your Feet! Star Eliseo Roman 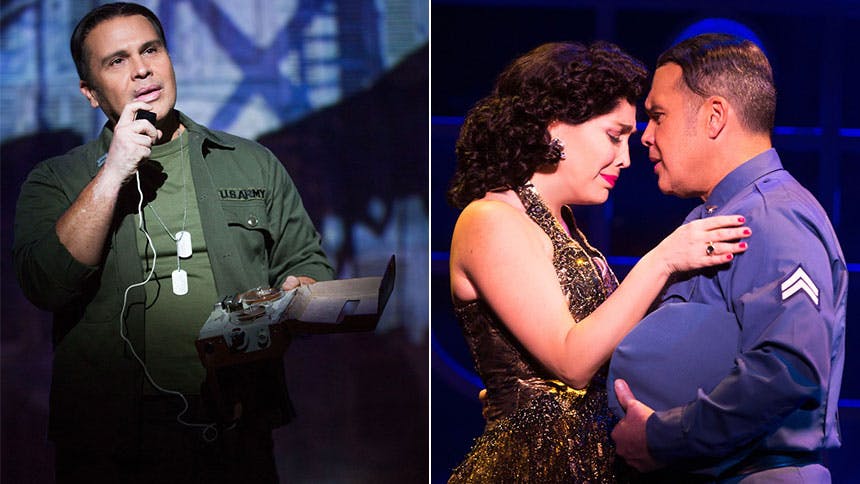 If like me, you have ever lived your entire life singing along to the In the Heights cast album, you know Drama Desk Award winner Eliseo Roman as Broadway's original Piragua Guy. Now, Roman's soaring voice is bringing joy to Broadway audiences once again as Jose Fajardo, Gloria Estefan's father, in the hit musical On Your Feet!

. BroadwayBox caught up with Roman to hear about life at On Your Feet!, opening night memories of In the Heights, and the classic musicals he'd love to star in.

1. We see your On Your Feet! character struggle with MS. What research went into that for you? What input or advice did Gloria have about it?
MS is very difficult for those whose lives are touched by it. For me...in the age of Google and computers, I immediately went into research mode since I wanted to portray Jose Fajardo (Gloria’s Father) with a sense of honesty and dignity. To be honest, I never spoke to Gloria about this. I wanted to come up with this on my own and know that if there was something that didn't feel right, she'd let me know. She's open, kind and generous with information and I felt that this being such a difficult memory for her, I’d take my chance with what I learned about MS. I think I passed the test.

2. I love your voice. If you could switch songs with anyone in the show, which On Your Feet! song would you want to take a crack at?
Hmmm...there are so many great songs in this show. “I Don't Wanna Lose You” is one. But I think it would be “Mi Tierra". The significance of this song alone is, to me, the essence of the show. To have to leave your country, against all odds, and create a life in a new place knowing that you may never return—that is heartbreaking. Yet, it instills HOPE that one day things will get better and that our beautiful country, our place in this world, is guaranteed. So poignant in this time we are in living in right now, isn't it?

3. What’s your most cherished In the Heights memory?
OMG! ALL OF IT! EVERY SINGLE DAY!! It’s so hard to select a specific moment when that show and period of time was the most magical time for all of us. If I had to pick only one: Opening Night. My parents and sisters were there, along with several friends. When we reached the button of the end of show, the lights went out, and the audience ROARED. When the lights came back up for the very first time, I remember looking out and thinking, "My God, I'm here! Don't forget this moment! It'll never be the same. God, Thank You!" I cried.

4. You worked in banking for years before making the switch to full time performer. What was the most terrifying moment of that transition? What was the most rewarding?
[Laughs] Easy! The hardest thing to do was tell my parents and family that I was leaving banking, this secure job, to follow my dream as an actor. I still remember my parents’ look of fear and worry, but they said, “This is your life, and you must do what you have to do.” I'll never forget that moment! Ever! I wouldn't be where I am without their support.

The most rewarding is when my entire family was at the opening of In The Heights. I remember them saying, "Okay, this is amazing! We're so proud of our star!" Those words....well...they feed me and propel me forward to this day.

5. What’s a role on your Broadway bucket list?
Funny, all the guys of On Your Feet! were just talking about this! Albin in La Cage. The Engineer in Saigon. But to be honest, I'm hoping that someone is writing and creating a role out there that I can originate and sink my teeth into. Anyone?

Head over to Broadway's Marquis Theatre to see and hear Eliseo Roman in 'On Your Feet!'

On Your Feet
Best Priced Tickets
Newer
The 10 Shows That Made Us Laugh, Cry, & Love Broadway in 2016
Older
Eight Glorious Nights Spent Off-Broadway in 2016
Sign up for BroadwayBox Discount Alerts