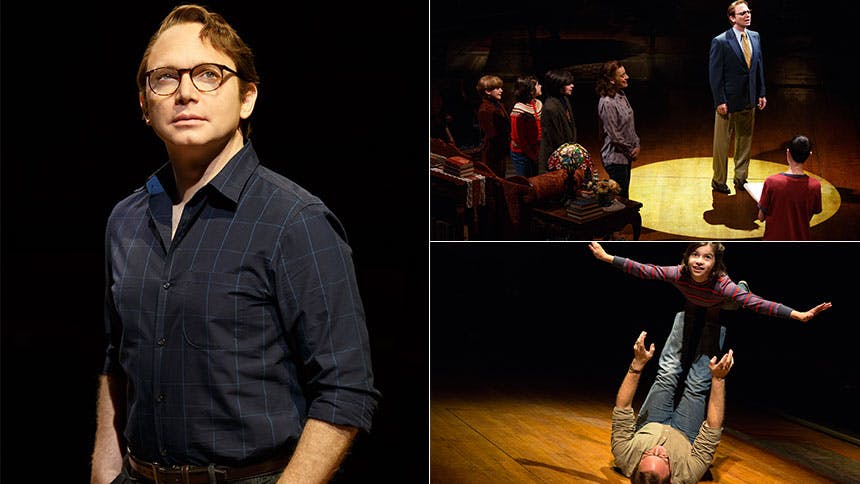 Fun Home. BroadwayBox caught up with the six-time Tony-nominated chameleon (whose range of additional credits include Tommy, Assassins, Hedwig, Titanic, Evita, & Sweeney Todd) to talk about getting into Bruce's mindset each night, his kickass band Loose Cattle, and pulling the wig down from the shelf one more time.

1. What’s your pre-show ritual like at Fun Home? How do you get into Bruce’s mindset each night?
I don't really have a ritual per se, but I do have routines. Maybe because the journey into Bruce's world is such a dark, difficult and solitary one, I find myself seeking out connections when I get to the theater (also because I just like the people I work with so much). I usually get soup from Thalia on the corner and eat it in the stage managers office. Most of the company, crew and band pass in and out since there's no green room at Circle In The Square—it's a pretty Spartan work place there. And then I'll catch up with my dresser, Geoffrey Polischuk—without whom I'd be utterly lost. Lauren Patten usually stops by to discuss world events or Nashville/Empire/The Bachelor. Rick Caroto comes in to put my wig on as I chat with our company managers. Then it's usually places and time to go onstage. It's a mystery to me what exactly happens as I take on the burdens of Bruce for the 100 minutes that they're mine to carry. I have little games and songs and handshake things with the kids, then the music starts, I walk a few solitary paces down a little hallway to collect myself and when I turn around and come back, pick up the boxes and walk through the vom, there's Bruce.

2. Where do you keep your Tony Awards?
I used to keep my first one in a box in a closet. Now that he has a little friend, I let them hang out mixed up with other acknowledgments, clay figures from New Orleans, some voodoo dolls, mardi gras doubloons and tiny 'tit rex throws (my mardi gras krewe), and Saints mementos on top of my bar. They seem happy.

3. I’m in NOLA for 24 hours, what are three things I have to do?
Have Praline Bacon at Elizabeth's. Hear music at Preservation Hall. Sit on the steps leading down to the Mississippi and think about all the rivers that brought you there.

4. Who inspires you musically? Is there a Loose Cattle song we can hear that influence in?
So many people. Lately Jason Isbell and Chris Stapleton. I think you might hear a little of them in Loose Cattle's cowboy waltz cover of Pony Girl.

5. If you hopped in a theatre time machine, which role of yours would you most like to revisit now for a night?
Hedwig.