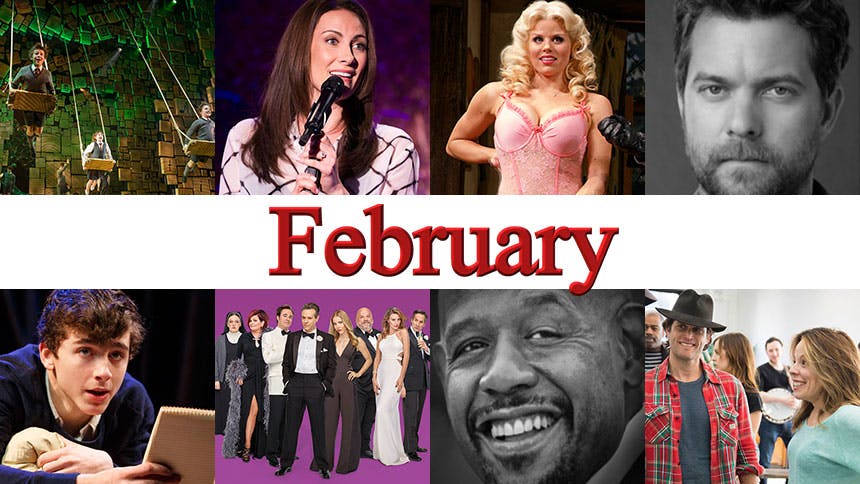 Time to get out the calendar and the debit card as BroadwayBox spotlights the 10 plays, musicals and concerts you should see this February in New York City.

1. BroadwayBox has a special Matilda discount you don’t want to pass up this month. Tickets begin as low as $39 for this Olivier Award-winning work of art. You can’t put a price on sitting at the Shubert Theatre silently sobbing to “When I Grow Up”…but if you could, it would be more than $39.


2. The Disaster! cast is a Broadway fan’s dream come true. With a book by the hilarious Jack Plotnick and Seth Rudetsky and a score boasting many of disco’s biggest hits, Disaster is a no-brainer for a friends’ night out, mom’s visit to NYC, or a mega-memorable date night. Trust us on this one, go see Disaster! ASAP. Previews begin at the Nederlander Theatre on February 8.


3. Two snaps for Corey Mach (Godspell, Invisible Thread) because he always manages to make his Broadway Sings concerts into can’t-miss events; that being said, I don't think I have ever been as excited as I am for February’s offering of Broadway Sings Billy Joel. Nothing says turn up like 20 bad-ass Broadway voices taking on the piano man’s greatest hits. The Highline Ballroom on February 22.

4. RTC continues its 50th anniversary season with the starry revival of She Loves Me

. Bbox was lucky enough to catch a preview of the four stars in action, and we nearly died on the spot. See this romantic comedy before reviews and word of mouth make tickets impossible. Previews begin at Studio 54 on February 19.

6. Academy Award, Golden Globe, and BAFTA Award winner Forest Whitaker makes his Broadway debut in Eugene O’Neill’s Hughie. The two-hander, set in a New York hotel in 1928, co-stars Tony winner Frank Wood and is directed by Tony winner Michael Grandage. The drama is so rarely produced that there’s no excuse for missing this sure-to-be beautiful Broadway mounting. Previews begin at the Booth Theatre on February .


7. New York audiences are raving about John Patrick Shanley’s latest, Prodigal Son. The semi-autographical off-Broadway drama from the Doubt and Moonstruck scribe paints the portrait of a young man who is either going to burn bright or fall apart.


8. When Steven Pasquale sings, you go. End of story. But what makes this all the more exciting is that Pasquale’s latest project is the rarely seen musical The Robber Bridegroom

—a Southern-fried Robin Hood story. Alex Timbers directs a killer cast in this bluegrass-infused gem. Previews begin at the Laura Pels on February 18.


9. In addition to driving audiences absolutely wild in Noises Off

, stage and screen star Megan Hilty is steppin’ out on the town twice this month for exciting concert appearances. On February 12, 13 & 14, Hilty headlines NJSO Pops Valentine’s Day concert, performing classics from the American Songbook. Then on February 22, the Smash star heads to Birdland for some after hours fun with NY1’s Frank DiLella. Show Biz After Hours is a live monthly talk show hosted by DiLella where Hilty fans can expect some delicious stories and impromptu musical moments.

, a one-night-only concert at Carnegie Hall. The Good Wife Emmy nominee will also be joined by other pals Darren Criss, Ricki Lake, and the New York City Gay Men’s Chorus.

Just showing @kchenoweth, my cohost of @thetonyawards, my new @lumeecase and she is suitably impressed!

February 4 through March 6, and if ever there was a reason to train over to NJ, this is it. With a score by Alan Menken, a book by film star Chazz Palminteri, and direction by Robert De Niro & Jerry Zaks, A Bronx Tale feels like yet another Paper Mill slam dunk.

She Loves Me
Best Priced Tickets