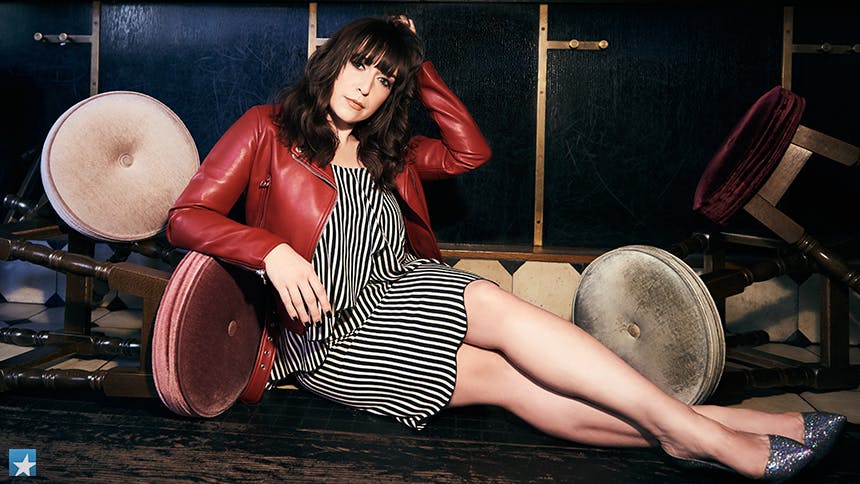 BroadwayBox and photographer Jenny Anderson launch a new photo and interview series this fall spotlighting 10 current Broadway musical replacement stars whose performances left us stunned in our seats! The illustrious group (ranging from title stars to scene-stealing co-stars) was shot at the beautiful West Village restaurant The Spaniard. Next up is Wicked

star Jessica Vosk. Beyond the insane vocal performance, the 15th Anniversary Elphaba brings such depth and warmth and pain to the iconic character that you must go back to see her live.

1. Tell me about your journey with Wicked, from your introduction to the musical to booking the tour in 2016 to hearing you'd be this big milestone Elphaba.
It's kind of amazing. 2003 was my first year in college, and that's when I saw Wicked—when it first opened. I wore the cast album out in my car. I actually sang all of the Glinda stuff, because I loved Glinda so much. The process of getting the role of Elphaba on tour was a lot of auditions and a lot of work sessions (about three or four). Then I found out that I got it and I was completely floored! I put in my notice at Fiddler on the Roof and went on tour.

When I first joined the tour in 2016, I had to see the show again in the first city that I rehearsed in. I sat there and I had not remembered anything from 2003. I was full of awe, and then at the same time, I thought to myself, "What have I gotten myself into?!" She is such a beast of a role. She's onstage the entire time. She doesn't really stop. So, it was super scary at the same time and I just jumped right in.

Then I wound up on tour for thirteen months, and I worked as hard as I possibly could. I wound up playing in really amazing cities and the fans—I was not expecting to have such a followership so fast. I credit them for keeping me grounded and grateful, and they're the ones who, at the end of the day, are responsible for where I am now. After I left tour, I wasn't a hundred percent sure that I would be the next Elphaba on Broadway. I was hoping that I might be the 15th anniversary Elphaba, but you never really know until the phone call comes. In the meantime, I had an album [Wild and Free] that I wanted to do and it was completely funded by the fans. Now it's being sold at the Gershwin after playing this iconic role every single night, and I just recently found out that it was chosen by the Grammy committee for consideration for nomination. It feels so crazy and silly to me that that's what's happening. It reminds you that you're in the place where you're supposed to be, and it takes a lot of hard work to get there.


2. How did you go about creating an Elphaba that was distinctly your own?
I wanted to make sure that I brought a bit of myself to the role—actually a lot of myself to the role. I remember thinking to myself that this role starts out as a girl, and we see her going to school, and we see her trying to fit in, and we see her being bullied. It reminds you of what growing up was like if you had ever been bullied or if you ever felt different. I take that stuff very seriously. I think it's something that young kids are dealing with a lot more now. So, I wanted to bring that part of life to the forefront and make her human and make it seem like, "Listen, I know I'm the only different person here; I know I'm the only one with green skin; I know you're ridiculing me; and, as much as I try to cover it up with wit and humor, it still stings and it hurts. But, I'm a good person." I know what that feels like.

Then you get to the Act II shift, after she's decided to say, “This is me. Screw you, if you don't like it.” That I understand also. I turned 30 and I made my Broadway debut. It's not like I went to a conservatory and started in my mid-20s. I felt like I was starting late in the game. Around 32 is when I finally became okay with who I was and that takes a lot of work. It takes work every day to just say, "I am who I am. If you don't like it, sorry, not sorry."

3. Finish this thought: My Elphaba is ____.
My Elphaba is 100% honest, vulnerable, and scared sometimes but she tries not to show it. My Elphaba is kind. She truly wants good in the world. She sticks her foot in her mouth. Everybody is not going to agree with her, but she still believes in what she believes in, and she will advocate for those who are lesser than or those who are misunderstood. At the end of the day, she just wants life to be better. She will put other people ahead of herself in order to do so. I think there's a lot of merit in that, and I think she's a badass.

She's, in every sense of the word, a badass. People all the time will talk about, "Oh, it's the most iconic role. Oh, it's the hardest female role." Yes, yes, that's all true. It's iconic, and it's an honor to play it. I've probably never been more grateful for an experience in my entire life, but that's not why I'm coming to the theater every single night. The reason I'm coming to the theater is because there's a possibility (and hopefully a probability) that somebody's life is going to be changed in the audience.


4. This series is about replacement performances that left us stunned. What’s a performance you saw as an audience member that left you stunned?
I've said this before, but I will say it again, I'm stunned by Taylor Trensch in Dear Evan Hansen. (And I just have to say that I was stunned by Ben [Platt] as well. Both of them are incredible.) When I saw Taylor, I sobbed because there's something so simple and real and unique that he brings to this role that makes you feel so many different emotions for this person. I find there's power in stillness. I could not get over how affected I was as an audience member, and I think that's amazing because oftentimes if you see a show more than once, you're like, “I know what's gonna happen. I get it.” But I was beyond moved by his performance.

5. Does being a “milestone Elphaba” feel somehow different? Is there a different kind of pressure or energy, either from yourself or from the outside?
It's a huge milestone for Wicked in general. Then to have people like Idina and Kristin come back to see the show and participate in all of these incredible 15th anniversary shenanigans, it's pretty huge. I'm not going to lie, it's pretty exhausting, but it is really darn amazing. I get to light the Empire State building green and I never thought I'd do that. I'm constantly reminded every single day how lucky I am to (a) play the role and then (b) to do it on the 15th anniversary, where this show is still bringing people in and changing lives. It's really a gorgeously written show. It's incredible how relevant it is, more so now than it was in 2003. I often get all the time, "Have you changed the script to make it more about this political era?" It truly is more powerful than ever, and so I take it really seriously.


6. Is there an Elphaba sisterhood when you see another?
Oh yeah! The green girls know how difficult it is to sustain this role and to keep yourself healthy. They know what it's like to get into your mind a little bit about how big the role is.

7. Did any former Elphie offer important advice?
Yeah, Julia Murney, man. She's become one of my best friends. She's kept me through. She will say things as little as, "You know after you sing ‘The Wizard and I’, you're going to automatically just walk stage left and start singing ‘What is This Feeling’, so you might want to keep a little Grether’s in your pocket." It’s little things like that. It's amazing to have women like that, and it reminds you just how important women supporting women is. It's nice to be able to look at a group of women who say, “I totally get it. I'm here for you if you need me.” They get it. Because it is a beast.