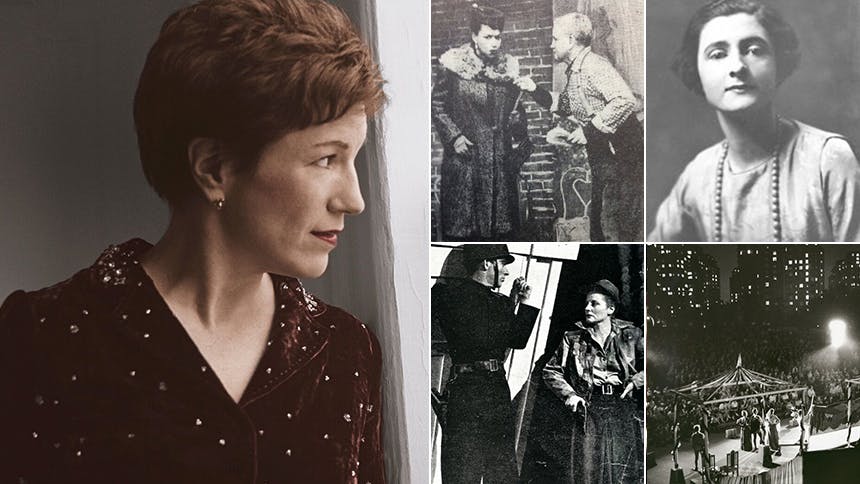 Tony, OBIE, Lily, and GLAAD Media Award winner Lisa Kron recently was awarded the 27th annual Kleban Prize for the most promising musical theatre librettist. Kron picked up a pair of Tony Awards in 2015 for the book and lyrics of the Tony Award-winning musical Fun Home, for which she also was a finalist for the Pulitzer Prize. A founding member of the OBIE-winning theatre company The Five Lesbian Brothers, Kron’s other notable works include Well, In the Wake, and 2.5 Minute Ride. As an actress, she received a Tony nomination for her performance in Broadway’s Well and a Lortel Award for off-Broadway’s Good Person of Szechuan.

BroadwayBox caught up with the Kleban Prize recipient to hear from her about the five theatre productions she’d most want to go back in time to see if she had a Broadway Time Machine.

I saw a production of it a couple years at Two River Theatre in New Jersey (directed by Jade King Carroll and starring Brenda Pressley), and this play is incredibly good. It’s a play about a play with a cast of African American actors directed by and written by a white playwright. A Raisin in the Sun is done all the time, and with good reason; it’s one of the greatest American plays, and I think a Trouble in Mind is right up there. I was staggered at how crackingly alive and incredibly well-written play it is. It’s funny and it’s serious and it is so current. It speaks to this current moment as well as anything ever written by an American playwright, and there needs to be a new first-class production of this play. The production done in 1955 won an OBIE Award and it was going to move to Broadway—it was all set—and then the producers told Alice Childress she had to change the ending. She had to write a happy ending, and she refused to do it, and they pulled the play. The people who really rocked my world as a theatre artist were the Split Britches Compay, Holly Hughes, and the people at the Wild Café. So I came from this world of the most extraordinary theatre makers for whom the door wasn’t open to move up into the commercial theatre. That has been true of every theatre maker who is not a white man—if you look at the numbers, that’s how it’s been. So Alice Childress is definitely one of our greatest playwrights and that play stands the test of time—the way A Raisin in the Sun does—and so I wish I had seen that production, and I would like to see a new production of it on Broadway.

Mercedes De Acosta was lovers with all kinds of famous women—she was known as a notorious lesbian. She was lovers with Greta Garbo and Alice Toklas. I would like to go back and see that play to see what it’s like. In the late ‘20s and early ‘30s there were all these women working in the theatre and also on Broadway. Mercedes was around all the most powerful and successful women of her time but she was the most out—and the most ridiculed and despised because of that. So I’m interested to know about Jacob Slovak and to see what was really in that play—what the play that did make it to Broadway was like.

I’d have loved to have been at Joe Papp’s first production of Shakespeare in the Park, his Julius Caesar in East River Park. His understanding that theatre is a popular form and not an elitist form. His feeling that a profound connection to the work of Shakespeare reflected very deep things about life and the way he knew it and experienced it. His assumption that if you put good productions of Shakespeare in front of general audiences of New Yorkers, you’d get an electrified response from audiences. In Ken Turan’s incredible book about Joe Papp, Free For All, the descriptions of those first productions in that broken down amphitheater in East River Park—I’d love to have been there in that moment. Audiences just wandered in. Kids just wandering by, getting sucked into those plays. I wish I had been there to see that.

I’ve been thinking a lot about the Federal Theatre Project and how it rose up in the depths of the Depression and all the incredible work that came out of that. Particularly I wish I could see their project Living Newspaper. They went all around the country and took these reporters and basically turned them into playwrights. They made these productions called Living Newspaper—performed versions of current events. They basically educated people about foreign policy or housing inequity or there was one called Triple-A Plowed Under, which was an indictment of the Supreme Court for killing an aide agency for farmers. Congress didn’t like it of course and it was killed. [Living Newspaper] toured all over the country and was one of the most popular things the Federal Theatre Project did. In this moment where we’re dealing with “fake news” and lots of purposeful misinformation, it’s very interesting to look at the radical effectiveness of the Federal Theatre Project and the Living Newspaper. I’m always interested in what kinds of connections can be made between theatres and audiences.

The Skin of Our Teeth by Thornton Wilder (Plymouth Theatre, 1942)

I think Our Town is the most perfect piece of American theatre ever written. In his book of essays called American Characteristics, he has an essay called “Footnotes on Playwriting”, and I think everything anyone needs to note about playwriting is in that essay. I can never quite figure out how The Skin of Our Teeth is meant to work and I’m very interested in it. I feel like there is a style that play is meant to be performed in that makes it lucid. I don’t know if Tallulah Bankhead had that style and that made it lucid or if she was just being Tallulah Bankhead and people went to see Tallulah Bankhead. I find the play really interesting but it’s strange in a way that doesn’t let me in. I feel there is some version of that play that has a performative style that makes it completely accessible, and I’d love to see that production to see if it would become clear to me in that way.