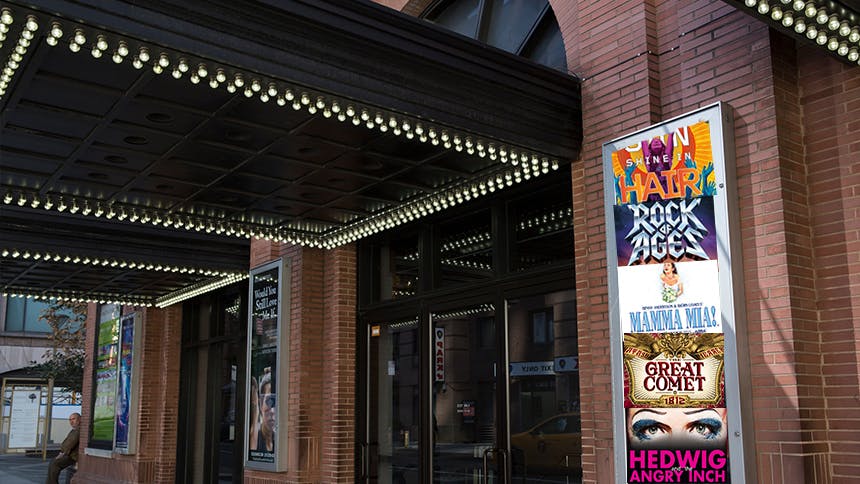 The musical Jersey Boys works its way back to NYC this November where it will enjoy an open-ended run at off-Broadway’s New World Stages in Times Square, following in the steps of fellow Tony Award-winning Best Musicals Avenue Q and Rent (true, Rent was a restaged revival but still).

Jersey Boys’ off-Broadway reincarnation got us thinking about some other former Broadway musicals we’d love to see rise from the ashes at New World. Here’s our dream list.


You can parade every former Elphaba into that taverna and the crowd will come. Eden? Murney? Saycon? Rachel Tucker? Let’s see them all wail on some “Winner Takes It All”. Change Donna and the Dynamos every few months and bank on the popularity of the brand and the upcoming sequel.

Hedwig and the Angry Inch


Hedwig began off-Broadway so it’d be a welcome home of sorts—though keep Michael Mayer’s revival staging. Think of all the wonderful New York theatre actors who you’d want to see as Hedwig. When you don’t have to worry about selling the Belasco, you can take interesting risks (even if they don’t work out every time). Every six weeks there’s a new Hedwig. I’d be there on the regular.


We can all agree this show’s life was cut waaaayyy too short, which is why moving it back off-Broadway now with its level of recognition would be a blast. You don’t have to worry about Groban or Oak or Mandy selling tickets. Just tear up one of the smaller theatres in there, scale the scope back, and let the vodka shots rage on.


This long-running favorite of straight guys, bachelorette parties, and ‘80s music lovers began at New World and should return there. Scoff if you must, but there’s no fun like Rock of Ages fun.

In this time of Trump and political unrest, we could use a musical that also feels like a rallying cry. Both shows felt so immediate in the late W. Bush era, and bringing back one of those amazing productions now could inspire a whole new generation of young fans.