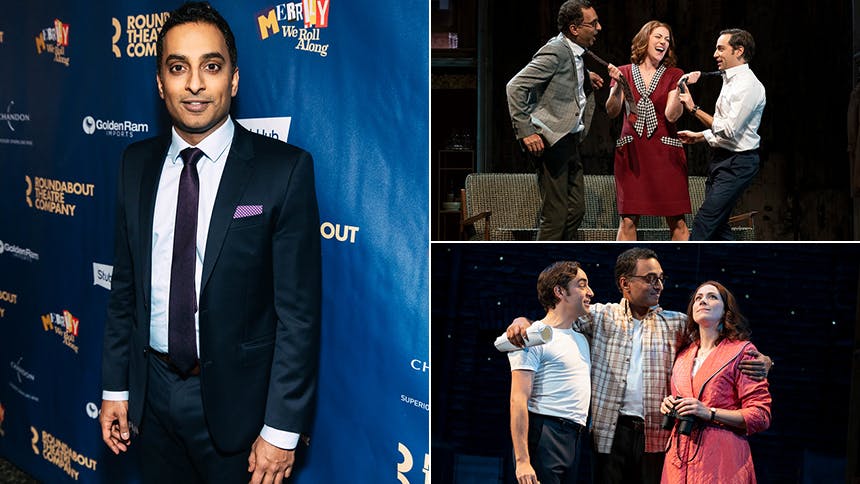 , and his big, passionate "Franklin Shepard, Inc." is a highlight of the entire evening. Manu most recently appeared earlier this season in the short-lived Broadway musical Gettin' The Band Back Together and previously co-starred on Broadway in LCT's My Fair Lady revival and Andrew Lloyd Webber's Bombay Dreams.


BroadwayBox caught up with Manu to talk about the advice Sondheim gave him, why he carries Bombay Dreams with him every day, and what happens to Charley after Merrily.

1. Merrily is quite a complicated show. Which beat did you find easiest and which took the most time to find?
“Franklin Shepard, Inc.” is a real (for lack of a better word) beast of a song. It's truly a mountain to climb, to learn, and to understand what the emotions of that piece are and how to land it. That took a little bit of time. Though, as I'm saying that I'm thinking “Opening Doors” is another one that's a real mountain to climb and to learn. “Opening Doors” is a real conundrum because the lyrics are very similar and yet they're so different. The rhythms are a challenge there because you're going from triplets to sixteenth notes. And that's difficult because you also have to sing with other people. Where do we put on the gas? Where do we hold it back a little bit? We talked a lot about burning the house down—where do we start doing that in this song specifically?

I don’t know if I found anything completely or easily. There's certain moments that feel like you're on an ice skate in a really fast race turning a corner; if you don't hit it properly or if you aren't in balance somehow, you will fall over and tip. It feels like that every show, which is a great feeling to have as an actor because it keeps you on your toes.


2. You brought up the music and as someone who also writes music, what do you find the most realistic or personal part of Frank and Charley’s journey in Merrily?
The arguing about the things you believe in with passion. What's funny about Charley and Frank's relationship—at least in this version of Merrily—is that we don't really see them arguing about the nuances of a line of lyric or a line of music. You don't see them arguing like that, but you do see them arguing about the bigger themes in their lives or the directions that they want the work to go in. I think that really is the truth of any collaboration. You could see that as a creative collaboration or you could see that in a start-up business if you have two founders. The two people who are running the show will disagree and will hopefully disagree with a lot of passion, because they are so invested about what they're doing. So, I find that to resonate really, really deeply.

3. We meet Charley in 1957, we last see him in 1976, where do you think Charley ends up in 1996?
I think he probably wrote a couple more plays and probably, maybe found another collaborator music-wise and tried his hand at writing some more musicals. I think Charley (at least in my mind and in my heart) loves the collaboration with Frank, the camaraderie of that. I always believe that my Charley loves writing plays and it's really wonderful, but the true, best artist he can be was with Frank as his collaborator. He feels more stretched in that way than going at it alone. So, I imagine he's found another collaborator—or somehow Frank and he have made up, although I find that to be a little less likely.

4. What conversations did you have with Sondheim about the show and about Charley that felt really illuminating for you?
Steve was wonderful. He was very kind. The big thing and the one note he said he had for me was that they don't ever know that “Franklin Shepard, Inc.” is a showstopping number—just keep fighting for what Charley’s fighting for. And he seemed very happy with “Franklin Shepard”, which is great. We had a few conversations about non-traditional casting, and his belief that he doesn't see color. He was very happy that I was playing the role and that they didn't hire me because of me being a certain ethnicity but me being the best person for the role, which was great.

5. You made your Broadway debut 15 years ago leading Andrew Lloyd Webber’s Bombay Dreams. What’s your most cherished memory of that experience?
I look back now and I think, how did we do that? The musical was extravagant in so many ways—you had a huge orchestra for a new musical, and ethnic percussion, and these beautiful costumes. I really was the lead from the first moment ‘till the end of the show; for the two hours and thirty minutes of the show, I was on stage for two hours and 27 minutes or something like that. The takeaway for me though, most importantly, was the cultural aspect of that show. Up until that point, there hadn't been a South Asian lead in a South Asian musical. And here we were, doing it eight shows a week for nine months. The perspective was at the time that it was a flop, but it wasn't. We ran for nine months. That's a long time for a lot of musicals. Of course, it didn't make its money back but I just think it was ahead of its time.

You looked down and you saw people in the audience, young kids who were South Asian or people of color. These kids were looking up and seeing their culture represented on stage or people like them represented on stage. That always was something that felt very important to me and still does. That experience I wear with me everywhere I go every day. I'm so thankful for that experience and to have been able to be a part of that.

Don't miss Manu Narayan as Charley Kringas in Merrily We Roll Along, running at off-Broadway's Laura Pels Theatre through April 14.