A Quick Taboo Tutorial In Anticipation of the 10th Anniversary Concert 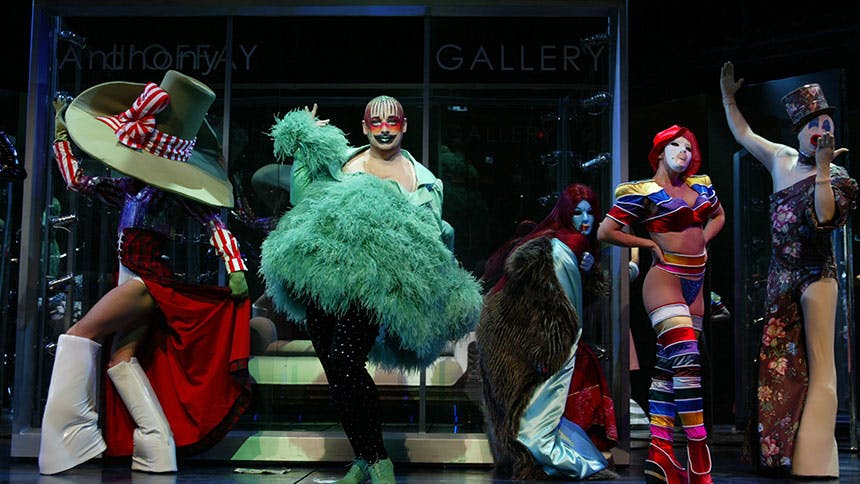 So the Great White Way is buzzing with talk of the Taboo reunion concert at 54 Below, but somehow you missed this cult classic and feel a bit out the loop. Well, we’ve got you covered. Here’s your speedy tutorial on the short-lived Boy George musical extravaganza Taboo.

Taboo is a musical about the iconic ‘80s pop singer Boy George (“Do You Really Want to Hurt Me”), his years in London’s club scene and his relationships with outrageous characters like Leigh Bowery and Philip Sallon. The musical premiered in London in 2002. At that time, Broadway cheerleader and queen of daytime television, Rosie O’Donnell saw the production and decided to produce it in New York. On October 28, 2003, the new Taboo, featuring a heavily revised book by New York comedian Charles Busch, began previews at the Plymouth Theatre (now the Schoenfeld), and soon after, it became the target of the tabloids.

Taboo, with it’s A-list producer and backstage drama, became top fodder for magazines and newspapers that catered to industry professionals and the ticket-buying audiences. New York Post columnist Michael Riedel had a particular field day with the show, its canceled performances and its backstage drama between the stars and creatives. Then the critics came in and slaughtered the promising musical after its November 13 opening. Taboo limped along for 100 performances and closed on February 8, 2004.

A Taste of Taboo

Okay, so now that we got the basics covered, let’s look at how fabulous this musical really was. The show featured brilliant performances by an ensemble cast of characters. Below, we give you a taste of the costumes, songs and magic that were overlooked 10 years ago.

“Genocide Peroxide” (:36)
George’s club scene frenemy, the electrifying Marilyn, makes quite an entrance in this fast-paced number. Marilyn is brilliantly and frenetically played by Jeffrey Carlson.

“Do You Really Want to Hurt Me” (2:07)
Making his Broadway debut, Euan Morton nabbed a Tony nomination for his performance as Boy George. George said of Morton’s performance, “he is more Boy George than I am.”

“Everything Taboo” (3:10)
This act two opener, brought audiences inside the Leigh Bowery’s hot club Taboo and featured the real Boy George as Bowery.


“Petrified”
Broadway mainstay Raul Esparza received a Tony nomination for his role as the show’s narrator Philip Sallon. “Petrified,” a number Sallon performs after he is gay-bashed, is a fan-favorite to this day.

Now you have learned enough to warrant buying a ticket for Taboo’s 10 Anniversary Concert on February 8, 2014 (10 years after its closing night on Broadway). You can enjoy the rest of this Tony-nominated score then, and for additional research, check out the documentary ShowBusiness: The Road to Broadway.