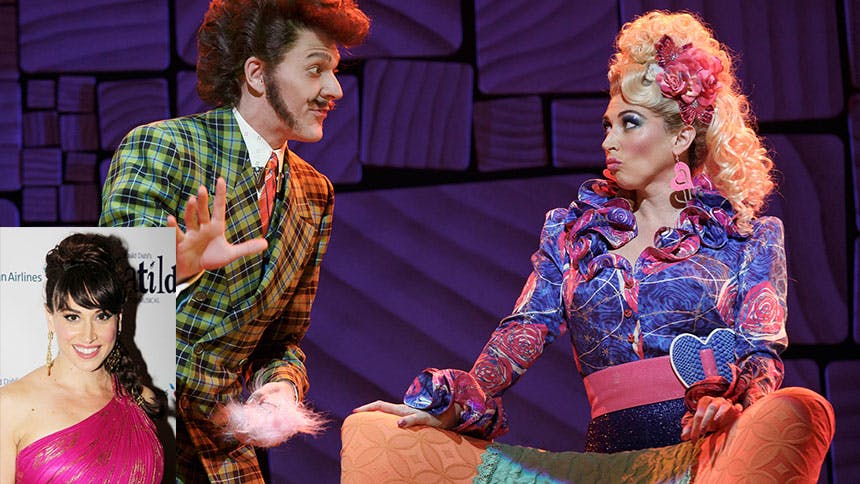 BroadwayBox continues its five burning question series with award-winning West End star and Broadway breakout Lesli Margherita. The sidesplitting actress, who won an Olivier for her role as Zorro gypsy queen Inez before making her Broadway debut as the delectable Mrs. Wormwood in Matilda, appeared on two BroadwayBox end-of-year lists in 2013 for Villains We Loved to Hate and Featured Actors Who Stole the Show. Below, Margherita spills the beans about her sparkly backstage hobby, Zorro's Broadway plans and why she might kidnap Rob Pattinson.

1. Mrs. Wormwood is so serious about her dancing in Matilda—what’s Lesli serious about? Macaroni and cheese; Star Wars; bedazzling. For real, I bedazzle everything. I spend a lot of time backstage bedazzling—my phone, my entire computer. I’m a little like Mrs. Wormwood, which is very sad but it totally works. 2. You are introduced to your crush Robert Pattison, what’s the first thing you say to him?
I doubt I’d speak. It probably would be more like a squeak. Actually, I’m almost afraid to meet him because I’m afraid he might smell or something—‘cause he kind of looks like he might. I really don’t know if I’d be able to speak. Though, I swear— not that I’ve imagined this— but he has to get a picture with my Robert that’s in my dressing room. I might have to kidnap him and just get a picture of him standing in my dressing room. 3. So, how did this American from Los Angeles end up as the gypsy queen in the West End Zorro?
I have never lived in New York until now. I was always an L.A. girl, and they decided to do the very first workshop of Zorro in LA, because they thought there might be more Spanish people in California. Then they ended up getting me, who is 100% Italian. [Did they think you were Spanish?] They totally did. Nobody asked until I got to the West End. And I learned all the Spanish phonetically. [Then] I opened it in Shanghai and Tel Aviv, which is amazing ‘cause there are versions of me all over the world, which is my favorite thing [laughs]. They are actually trying [to open it in New York] for next year if they can get a theater and everything. 4. If you weren’t in Matilda, and you were back in L.A. right now, where would we find alternate universe Lesli on a Friday night?
It’s not too different honestly. People think there’s no theater in L.A., but I was nonstop doing shows. I would just be in my car sitting on the freeway getting to the show. Then, I would come home and sit in the hot tub, not freeze my ass off. 5. What is your best American girl in London story?
All the flamenco stuff had a lot of movement with the skirts, and when we started rehearsing I said completely out loud in front of everyone, “Can anyone please get me a rehearsal skirt because I don’t like to dance in pants?” Pants in Britain are underwear. So… [Also,] if you go on YouTube you can find my Olivier acceptance speech and it’s pretty American. I look like they announced my name to go on The Price Is Right. I had no idea [I would win]. They said Americans don’t win. So I was just having a great time drinking at the table. That’s why the speech is a debacle. That’s pretty much the quintessential American moment. That speech.

Matilda
Best Priced Tickets
Newer
A Quick Taboo Tutorial In Anticipation of the 10th Anniversary Concert
Older
Meet the New Stars of Mamma Mia! Through The YouTube Videos of Their Past