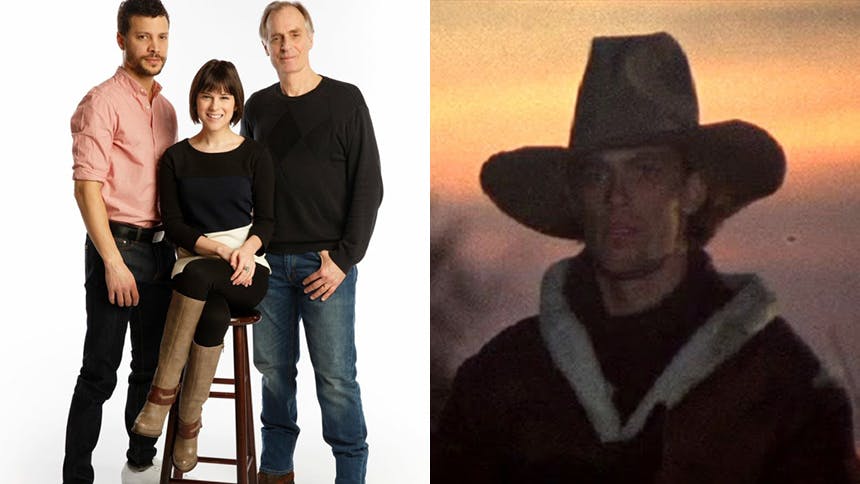 Encores! has struck gold with their latest production, Paint Your Wagon, because it is headlined by none other than Oscar winner and two-time Tony nominee Keith Carradine.


Carradine first Broadway show was Hair in 1969, starting in the ensemble and eventually playing the roles of Woof and Claude. Subsequent leading roles on Broadway include Foxfire (1982), The Will Rogers Follies (1991 Tony nomination), and Dirty Rotten Scoundrels (2006). Notable off-Broadway credits include Mindgame and A Lie of the Mind (2010 Lortel nomination).

Clockwise: Carradine in 'Foxfire', 'Dirty Rotten Scoundrels', 'The Will Rogers Follies', 'Mindgame' and 'A Lie of the Mind'

His most recent New York theatre credit was 2013’s Hands on a Hardbody (Spoiler: he won the car and got a Tony nomination).


Carradine’s IMDB page is insanely long, so we aren’t even going to try to tackle all the TV and films, but we will throw some nods over to Deadwood, Dexter, Fargo, Madame Secretary and the films Emperor of the North, Thieves Like Us.

Clockwise: Carradine in 'Deadwood', 'Dexter', 'Fargo', 'Madame Secretary', 'Emperor of the North', 'Thieves Like Us.'

Also, he appeared in Madonna’s iconic “Material Girl” music video. (His resume has to lead with that right? Mine would.)


Actually, it might lead with his own music career since Carradine is a Golden Globe and Oscar-winning songwriter for 1975 hit, “I’m Easy” from the film Nashville.


But shockingly enough, Nashville and the Oscar aren’t what Carradine considers his game changer. Nope, for him it came much earlier in 1971’s McCabe and Mrs. Miller (his first screen appearance).

I can say that the role that put me on the map professionally was the young cowboy in McCabe and Mrs. Miller, directed by Robert Altman. It was a small role but it was pivotal in the film and the demise of my character was the denouement in the movie. It was one of those moments a young actor hopes and wishes for. I had no idea that the role would have that kind of impact. I was a gob smacked young actor. I was 20 years old and I think I realized what I had lucked into at the premiere at the Pantages in Hollywood. The moment Manfred Schulz shot me off the rope bridge over an ice pond, there was a gasp form the star-studded audience, and I realized in that moment that my little bit had reached them and it was moving; I was a part of something memorable and it really established me in the motion picture world because of the nature of the role itself and that I was chosen by Robert Altman, the hottest director of the moment. It gave me a validation to be deemed worthy by a director of his stature.

The funny thing is that movie that established me premiered at the Pantages, then when we did the tour of Will Rogers Follies, we played the Pantages and my star on the Walk of Fame is right in front of the Pantages. It was kind of a poetic full circle.

Paint Your Wagon
Best Priced Tickets
Newer
Introduce Your Self(ie): 10 Questions with An American in Paris Standout Brandon Uranowitz
Older
From Ragtime to A Man of No Importance, Ahrens & Flaherty Look Back on 10 Career-Defining Songs
Sign up for BroadwayBox Discount Alerts