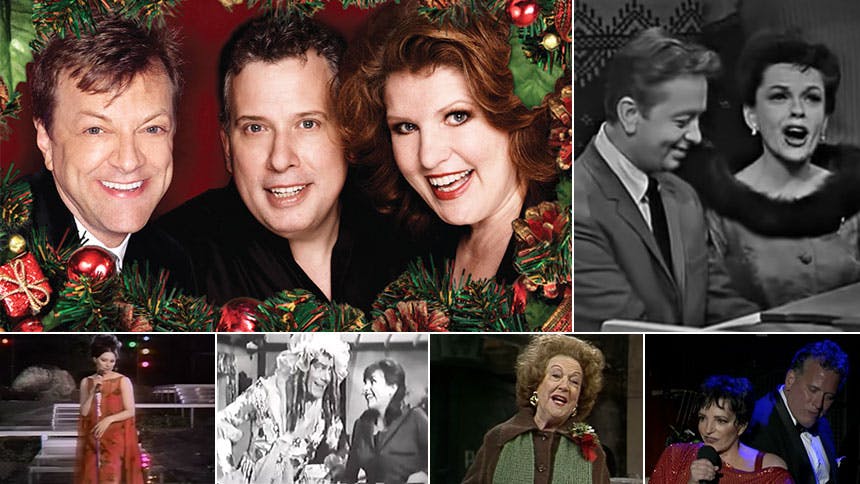 If you’re looking for a Christmas concert that will leave you talking well into 2017, don’t miss the seventh annual A Swinging Birdland Christmas, running at the famed New York club December 23-25. Jim Caruso, Klea Blackhurst, and Billy Stritch bring you back to the heyday of televised holiday specials with this joyful (and funny!) concert packed with swing arrangements of Christmas classics.


Before the trio takes the stage at Birdland, BroadwayBox caught up with the gang to hear from each of them about their favorite Christmas performances on YouTube.


Streisand’s extraordinary performance of “Silent Night” was performed live in Central Park on a sweltering June night in 1967.  She was in the middle of filming Funny Girl, and though she had enjoyed wild success on Broadway and television, her superstardom was just beginning.  Evidently, it had poured buckets in NYC that day, so there hadn’t been a proper rehearsal or sound check.  Somehow, thanks to the brilliance of Executive Producer Marty Erlichman, Musical Director Mort Lindsey, audio by the legendary Phil Ramone, and those Irene Sharaff gowns, Barbra created magic for 135,000 very lucky people.  Of course, this gorgeous Marty Paich arrangement can be heard on A Christmas Album, released in the fall of the same year. Although I think it contains some of her all-time most sensitive singing, Barbra insists she had laryngitis and could have been better!


It sounds slightly pathetic, but as an only child, I grew up yearning to sing with a bunch of brothers. This video clip is the culprit.  The combination of The Williams Brothers, The Osmond Brothers, Kay Thompson’s ingenious song and a bunch of turtle neck sweaters was enough to make young Jimmy Caruso a lifelong fan of intricate and freshly harmonized singing.  Oh, to be a fly on the wall as these masters of group-singing rehearsed.  I hate to sound elderly, but I truly miss the Andy Williams Christmas Specials.

”DING A LING, I FEEL SO CHRISTMAS-EY!”—Liza Minnelli & Cyril Ritchard


I’m not sure whether it’s Liza’s uber-bubbly and hilariously hammy performance, or an in-drag Cyril Ritchard’s questionable dancing ability…but I’m a bit obsessed with this clip from a 1965 ABC-TV musical called The Dangerous Christmas of Red Riding Hood.  It’s campier than a pink hairnet, and a complete giggle-fest.  I will say that it’s hard to believe that Bob Merrill and Jule Styne, the geniuses behind Funny Girl, came up with a lyric that rhymes “taste-o” with “antipasto!”


Talk about a high point in my career—playing the Palace with my dear Liza for twenty-five performances in December of 2008 after touring the show worldwide for over two years. It really was a thrill night after night and being able to accompany Liza on this iconic Christmas song as an encore was the icing on my holiday cake!


Was there ever a better voice than Karen Carpenter's? I wore out several copies of this album when it was released back in the ‘70s and it remains one of my favorite holiday songs. The entire Carpenters album A Christmas Portrait is classic and Karen's voice remains one for the ages.


Although it's been sung many times, many ways, this song will always be my favorite Christmas song of them all. Little did Mel know when he and Bob Wells wrote this song on a scorching summer day back in 1945 that it would become one of the most beloved songs of all time. First recorded by Nat "King" Cole, this song has been recorded literally thousands of times.


This 1978 Sesame Street Christmas Special is one for the ages. It has so many wonderful performances and performers. I’ve chosen this clip featuring Ethel Merman trying to cheer everybody up by singing a new-fangled standard. She sings to Leslie Uggams, Bob, Maria, and the rest of the street, but I especially love her saying to Imogene Coca, “What’s the matter, Imogene? You look like an idiot.” Ethel Merman was in her early seventies here and you can see so many of the behaviors that worked so well for her throughout her career… the swagger, the completely presentational declaratives and of course, the clarion belt. She’s not the most subtle of performers, but there is an honestly to her that just kills me. I love the way she reaches for Leslie Uggams hand at the end. You can just see her brain shouting, “Come on! Take my hand for chrissake, we rehearsed this!”


I remember seeing Scrooge in the movie theatre with my dad and my little sister. I was smitten. Once I heard this song, I had it committed to memory immediately. It is my favorite telling of the story, by far. I just love this score and the huge choreographed numbers with hundreds of people filling the streets. The irony in this scene is hilarious and heartbreaking. The fact the Scrooge is finally saying thank you, but has no idea they can’t see him or hear him and are in fact celebrating his death is very moving to me. Albert Finney is brilliant. I thought he was really an old guy and and I couldn’t figure out how they made him look so young in the flashbacks. I was a kid. It didn’t occur to me he was a young man wearing old age makeup most of the movie. To my young eyes, he just WAS Scrooge. And Scrooge was and OLD miser who found redemption.


I grew up watching this cartoon every year. And this was always my favorite part. I thought it was HILARIOUS!!  A few years ago, Broadway Cares/Equity Fights AIDS, did a one-night concert of Mr. Magoo’s Christmas Carol starring Douglas Sills. I am very happy to report that I played one of these plunderers! That’s right this number was performed with much enthusiasm by Christopher Sieber as the pawn shop ownerJeff Blumenkrantz as the undertaker, Jennifer Cody as the charwoman and yours truly as the laundress. It was one of the craziest, most wonderful nights ever. "La la la la la la…We’re just blankety Blank blank NO GOOD!” Funny funny stuff.

Newer
10 Current Broadway Replacement Stars You Have to Go Back and See
Older
Hot Clip of the Day: The OBC of Big River Perform the Soaring "Muddy Water"