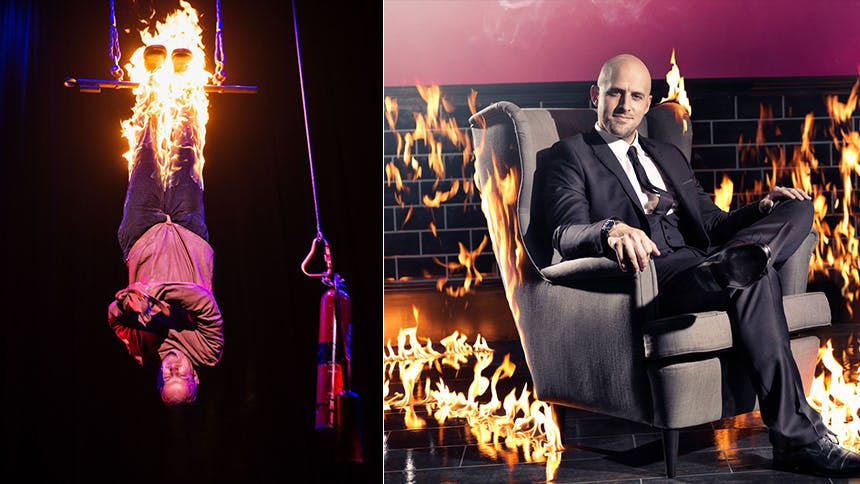 The international hit magic spectacular The Illusionists is back on Broadway for the holiday season with an all-new show at the Neil Simon Theatre, and brand-new for New York audience this year is Welsh escapologist and star of TV's The Incredible Mr. Goodwin, Jonathan Goodwin (The Daredevil).


BroadwayBox continues its weekly Meet the Magician series as we get to know Jonathan Goodwin.

1. The first stunt I ever learned was:
The first stunt I ever performed was when I was a teenager. It was an escape stunt and I was tied up with a bed sheet suspended above me and a hot iron was placed on top. I had to escape before the iron burned through and hit me in the chest. I didn't make it. I had that scar for over a year.

2. The moment I knew I wanted to pursue this professionally was:
I read a book about Houdini when I was about 7 and that was that. My parents even advocated it as a career path until they realized I was serious. These days, even now when they see me they ask me when I'm going to get a proper job.

3. Greatest thing about being part of The Illusionists’ Band of Brothers:
The best thing about working with The Illusionists is learning and sharing experiences with the best performers in their field in the world. Everyone is at the top of their game; but we also do very different things so there isn't really any competition; just a wonderful opportunity to work with and collaborate with the best.

4. My favorite film, TV show or play about a magician is:
Well I'm not a magician and so I don't really have a favorite, but if I were to pick a movie about a stunt performer, I'd choose anything that Buster Keaton did. He was an absolute genius. He and Douglas Fairbanks created parkour eighty years before it was actually invented.


5. My favorite city in the world to perform in:
I have thoroughly enjoyed performing in NYC. There is just such an atmosphere performing on Broadway. It's easily the most exciting place that I've performed. I did a stunt at Radio City Music Hall this summer and that was incredible. Such an amazing venue and such appreciative audiences.

A photo posted by Jonathan Goodwin (@jonathangoodwinofficial) on Sep 5, 2015 at 4:35pm PDT


6. One thing I always have with me when I travel:
My family! My wife and daughter are always on the road with me. Katy, my wife is on stage with me; and my daughter is always hanging out back stage. It's a real family affair and helps to keep me grounded and sane. It would be very difficult to be on your job and have them be at home.


7. Person who inspires me professionally:
Buster Keaton, and Houdini I have mentioned. I'm a huge fan of a German stunt performer whose name was Hans Moretti. He was the first person to popularize crossbow acts on stage and now that I perform my own crossbow shooting act, I have such a respect for how truly incredible he was.


See Jonathan Goodwin live with the other fantastic Illusionists at the Neil Simon Theatre through January 3, 2016.