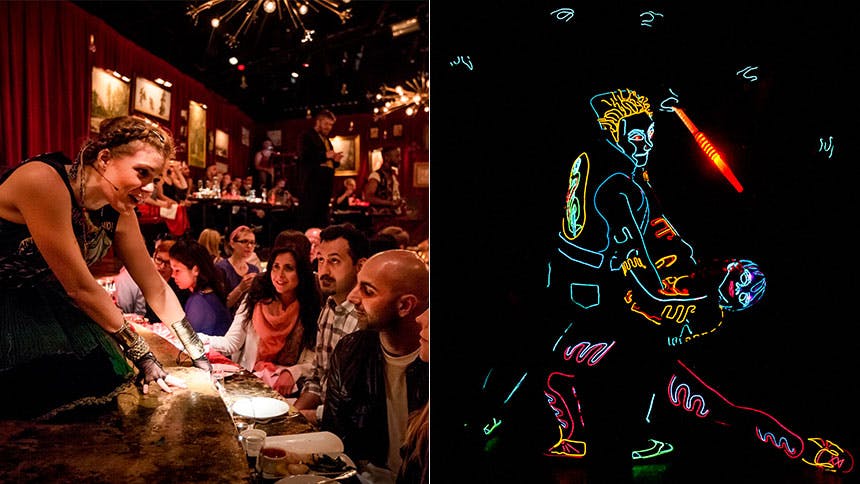 Do you ever go to the theater in hopes of experiencing something utterly unique? Do you want to take part in an evening that can only be created inside the live theater? Then BroadwayBox has four new, exciting and unconventional off-Broadway shows to introduce you to. In the tradition of Fuerza Bruta, Gazillion Bubble Show and The Blue Man Group, these four gems are interactive, heart-pounding and mesmerizing. Check out the list below, then snag your discount tickets today.

Natasha, Pierre and the Great Comet of 1812 at Kazino

Lose yourself in the lush Russian atmosphere of the Kazino tent in Times Square where the rock and roll War and Peace-inspired musical Natasha, Pierre and the Great Comet of 1812 comes to life all around you.

The company of Natasha, Pierre and the Great Comet of 1812.

Feeling naughty? Then take in the heart-racing combination of circus tricks and sexy burlesque at off-Broadway’s La Soiree. With nudity, gymnastics and musical numbers, there’s truly something for every adult in the audience.

You may have watched iLuminate on the popular TV show America’s Got Talent, but nothing is like seeing this 90-minute electric-light ballet live. Urban beats, hip-hop moves and mind-blowing costumes come together to create the one-of-a-kind iLuminate: Artist of Light.

A scene from off-Broadway's iLuminate: Artist of Light.

Nothing to Hide at Pershing Square Signature Center

There are typical magic shows and then there’s Nothing to Hide, the spellbinding new Neil Patrick Harris-helmed show which recently opened in New York after a celebrated Los Angeles run. Who ever knew a card trick could be as big a showstopper as a kick line?

Derek DelGaudio and Helder Guimaraes in Nothing to Hide.