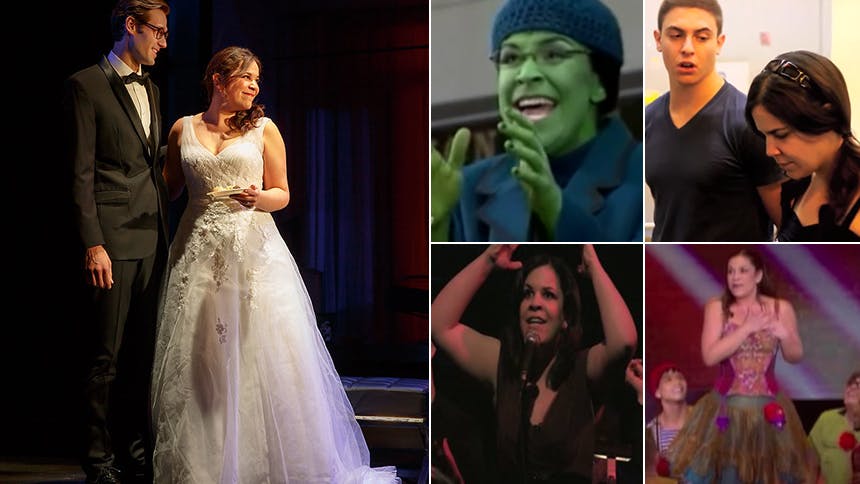 Big-voiced Broadway favorite Lindsay Mendez is making her non-musical Broadway debut as Laura (the ultimate bestie of Gideon Glick's Jordan and a young woman who must reprioritize her relationships after falling in love) in the acclaimed, must-see comedy—though bring tissues too, JIC—Significant Other

Below, BroadwayBox hears from the former Wicked and Dogfight star as she revisits seven of her most epic and beloved YouTube clips.


Oh my gosh, this song. I love it so much and it’s so crazy. This song is so hard! First of all, the story of it is such a great match of what Ryan [Scott Oliver] does—writing these Gothic murder tales and also music that will not quit. He’s just such a great composer. Every time we do a concert, he’s always like, ‘You have to do this.’ And I’m like, ‘Mother’s tired.’ Then getting to do it with Alex [Brightman], Jay [Armstrong Johnson] and Natalie [Weiss] was so fun. I just love it so much. I feel like I’ll be singing it eight octaves lower in my cabaret when I’m 80, but it will be a slow ballad.


This is such a great experience for me because it was my Broadway debut, and I could not believe we were on GMA. The whole thing was so fun. I love this cast so much and I learned so much from them. I was so wide-eyed and new to everything Broadway, and getting to play a role in my first Broadway show was so thrilling. Whenever I see these things, I’m like, ‘This was so early in the morning and I’m sure after a two-show day; where did the energy come from?!’ We are all so energetic. And also, I’m next to my best friend, Kirsten Wyatt—we became best friends and wives during this show, and she’s been by my side ever since.


All “The Wizard and I” [clips] are very loaded but this one I’ll never forget. It was 7 AM on the day of the 10th anniversary, and I didn’t sleep the night before. My car picked me up at 4:30 in the morning, we did camera blocking, then I had to go the theatre and get green—but also HD camera green which is different than my normal show beat green—then bus back here and do these numbers. I’m also anticipating that I have the 10th anniversary performance this night, so I just feel like I was in another body this whole day. I was not even able to handle the day I was having. I’m thinking millions of people are watching this, and please Lord let my voice be with me and let me tell this story in a honest way. Honestly, at the end of the day, it was such a huge honor for me and I was so thrilled to get to do this. I was so stoked by the end of it.


This is so good and it totally happened randomly. My best friend Kirsten is a huge This American Life fan and always has been. But I don’t understand podcasts—it sounds too complicated so I’ve never done it. Then Michael Mayer called me out of the blue one day and said, ‘I want you to do this thing we’re doing. I don’t really have any information for it but say you’ll do it; it’s for Ira Glass.’ I told Kirsten and she freaked and said, ‘Youre doing this!’ It was a week long. Five days of rehearsal and then we performed it at BAM. It was so fun and so fast but it feels like such a big memory to me even though it was so quick. Ira Glass and I are now super good friends and he told me schools all over are licensing it and doing it now.


Jake Wilson shot this series because he was really good friends with the boys, Benj and Justin. All in all, Dogfight was such a dreamy experience and the rehearsal process was so awesome. We really got to take our time with the play. I felt like because so much of the show was Derek and I, we got so close. I think because Derek is literally the nicest, kindest, most beautiful soul on the planet, for him to play this role and do this horrible thing, we had to really have a lot of trust and love for each other offstage to get through that story every night. We spent a ton of time together outside: we would walk to rehearsal and walk home every day, and go to dinner, and run our lines. We were just really good partners and it has maintained through the years. I’m sure this is another one that I’m going to be walking out when I’m 70 with Derek—these are the songs that are in my canon now.


Betsy and I both had concerts in our hometowns in California and thought, ‘Why don’t we put a show together the two of us and we'll do it in both cities?’ We coordinated this concert we did in both places, and we each had songs we wanted to do separately but we both love ‘Meadowlark’ and thought, ‘Why don’t we try to make this a duet?’ So, I arranged this one and Joni Mitchell’s ‘River’ as duets, and we’ve never done it since, and I don’t think I could remember it now, but it was really awesome. Singing with Betsy is a dream come true.


I did a workshop with Danny Goldstein at the O’Neill at the time, and he said, ‘I want you to come in for this.’ But the Godspell audition was the worst audition known to man. I remember throughout New York, actors were cursing this audition because they sent you all these parables and said, ‘Come up with your version of the parable and bring props and costumes.’ That’s an actor’s nightmare—all we want are some parameters and there were none. I thought, ‘I don’t want to do this and put together this audition. I just want to sing the song.’ I put it off ‘til the very last minute and my agents were telling me, ‘You ARE going in!’ So the morning of, I thought, ‘Ok, what’s something I do that’s unique to me? Well, I sing jazz and I like that…’ So, I wrote a jazz song out of a parable and performed it. I had to audition a bunch of times but ultimately, finally it went my way and I was just so thrilled. I loved that cast so much. We had such a good time making that show and doing it every night. Getting to sing that song every night was incredible. I couldn’t believe that was me. Throughout my whole career, I’ve always felt I can’t believe I get to do this. The shine never goes away for me. I’m constantly so fortunate.

Don't miss Lindsay Mendez in 'Significant Other' at Broadway's Booth Theatre through July 2.

Significant Other
Best Priced Tickets
Newer
Video Exclusive! Get Ready to Be 'Shook' Once You See Everything Going on Backstage During In Transit
Older
20 Questions in 2 Minutes with Come From Away Star Kendra Kassebaum
Sign up for BroadwayBox Discount Alerts