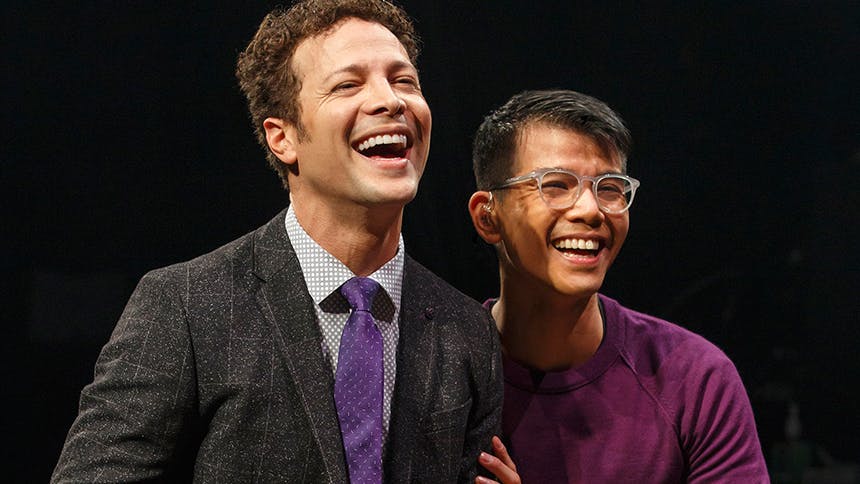 Telly Leung (Glee, Allegiance, Godspell, Wicked, Rent) is back on Broadway starring in the a cappella musical In Transit. Telly originated the role of Steven, a gay man in New York planning a wedding to his partner, Trent (Justin Guarini), and he's back at the Circle in the Square after taking a brief personal absence.

BroadwayBox caught up Telly to talk about his recent nuptials, returning to the "deceptively difficult" In Transit, and his dream of judging drag queens.

1. I want to hear a bit about your wedding. Was it a quick engagement? Was it an intimate affair?
This is exactly what happened. Our first preview of In Transit was also the day after the election. My partner, James, and I had been together for 12 years. We met while I was doing Pacific Overtures. We’ve always known we wanted to get married someday, but then when the election didn’t work out the way we thought it was going to work out, we all of the sudden felt a very deep urgency to get married soon. Just because we expected there would be a lot of uncertainty to come with this president—and it’s proving to be true—both as gay men and me as a person of color. We thought, “These rights that we’ve taken for granted, are they in danger in the new administration?” So, Jimmy and I said we should just go to City Hall and do it. We are so practical and unromantic, we looked in our calendars and said, “What’s the only day that the two of us have free together between now and the Inauguration? And Jimmy said, “I took the Monday after the opening night of In Transit off because I knew I’d be going to the party.” I said, “Great we’re going straight to City Hall the morning after we open the show.”

That was the proposal, the engagement, all of it. We didn’t tell anyone because we wanted to wait to tell our families over the Christmas vacation. Then we decided we were not going to even announce it until the Inauguration. There will be a lot of fear and anxiety and maybe this good news on Facebook, Twitter, and Instagram will offset some of those feelings.

2. Was it daunting to return to the all a cappella In Transit? Did you keep up with the music and your vocal arrangements while you were out?
I took a leave of absence to be with my family for a little bit, and coming back I did a very quick put-in rehearsal, and my body and voice had forgotten how difficult this show was. My castmates said when I was running through the show I was in a cold sweat for the first five numbers. Because it is a nonstop show and my body and voice had not been doing it for six weeks, it was a shock to the system. Now that I’m back it feels normal again, but it is deceptively difficult what we are doing up there.

3. What was it like to perform In Transit for the Clintons? What was the energy backstage?
We knew only several days before. And because the Clintons are the Clintons, we heard they could possibly reschedule or cancel, because their schedules are crazy. But they came. They really loved it. They found it truly charming. Our whole show is about people that are trying to get somewhere—who have worked so hard to get from point A to point B and either they don’t get there or they get there in an unpredictable way. So, it’s something we all relate to at the moment as a nation and society. Of course, we were all very nervous, and, of course, because it’s Circle in the Square the audience is watching them watch the show. I’m happy we were their date night.

4. Do you still text or keep in contact with your Allegiance co-stars George Takei and Lea Salonga ?
Oh yeah! I was actually just texting with Lea yesterday. I still keep very close touch with them. We had worked on Allegiance together for seven years! And now it’s living on as a movie. The first Fathom Event did so well that we are doing another screening this Sunday in over 400 screens all over the country. I think it’s because this topic of the Japanese-American internment camps and how it parallels with the travel ban; it’s something that’s really resonating in a profound way. People want to understand what’s happening in our world through art.

5. If you could join any TV show right now, which you would you pick?
I would want to be a judge on RuPaul’s Drag Race. I’m obsessed. I actually think it is one of the most brilliant shows. They have brought drag culture into the mainstream and they are able to reveal who these people are under the makeup too. Often times I go from laughing and being completely entertained by this reality show contest to a moment RuPaul makes me weep and cry because I’m so moved by their stories. How dare you, RuPaul! How very dare you give the gambit of emotions on a drag show competition.
Do you have a favorite queen?
Bianca Del Rio. She is the best representative of New York City drag I can think of, and she’s from the Broadway world. For many, many years she made so many costumes and clothes for the Broadway community. I rooted for her; I knew she was going to win; and I still root for her.

Don't miss Telly Leung in 'In Transit' at Broadway's Circle in the Square Theatre.