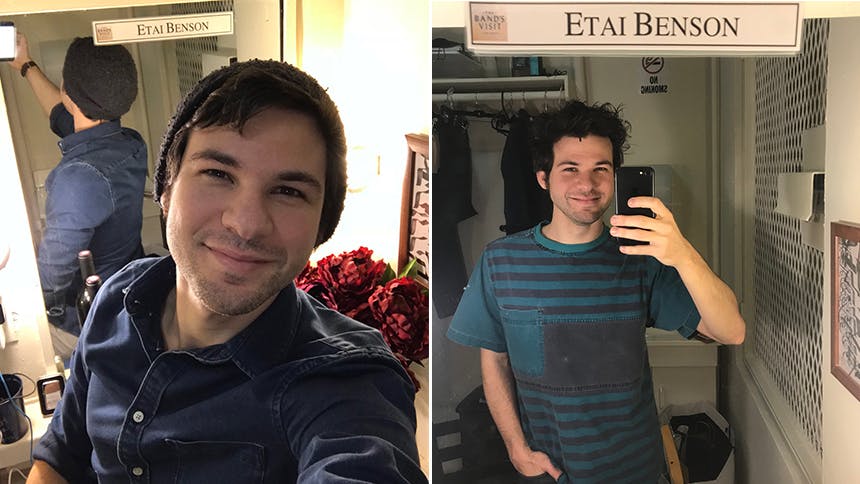 Etai Benson gives a breakout performance as the sweet, shy Papi in the acclaimed hit musical The Band's Visit

. The young man living in the small Israeli town of Bet Hatikva has trouble talking to women, and one of the highlights of the musical is set at a local roller rink where Papi laments his inability to express his feelings ("Papi Hears the Ocean") while his new friend Haled (Ari’el Stachel) explains his secret to success in love.


Get to know Etai (who previously starred as Boq in Broadway's Wicked and as Adam in the national tour of An American in Paris) a bit better as he talks about his long, personal journey with The Band's Visit, the time he went green at Wicked, and his path to Broadway.

1. What was it like jumping into this ensemble cast for Broadway:
From day one, I felt so welcomed into The Band’s Visit mishpacha (that’s “family” for all you non-Hebrew speakers, which I gather is about 99.9% of you). Since some of the cast were old friends of mine and I'd worked with most of the team on an early workshop of the show, I already felt like extended family. What I loved was that most of the cast had been living with this material for a year since the off-Broadway production at the Atlantic Theater. So even in the first read-through, I felt that I had stepped into a living, breathing piece with fully realized characters. And since the production had been so well received off-Broadway, there was none of the typical pressure that comes with rehearsing a new show: “Is this thing good? Are we telling the story? Are people going to get it?” So without all that stress, we were free to really play and mine the material and make the story even richer.

2. What’s your favorite small moment in the show audiences might miss if they weren’t looking for it:
Those who have seen our show know that there’s a fair bit of Hebrew and Arabic dialogue without subtitles. I love that the writers trust that the audience will pick up the context while at the same time feeling the miscommunication of the characters. Four of us in the cast are Israeli and fluent Hebrew speakers, including Sharone Sayegh, who plays Anna. There’s a scene where she is railing at me, screaming at my face in Hebrew. Our writer, Itamar Moses, told her to just let loose and go to town. What the audience doesn’t know is that she is shouting the dirtiest, most vulgar obscenities at me (Hebrew curse words tend to be very…um, creative). And every performance, I have to fight from breaking and laughing because, in life, Sharone is the sweetest, most adorable and cheerful person, and here she is laying on the filthiest language you can imagine. What she’s saying is too dirty to publish here, but ask me at the stage door...

3. What do you think makes you and Ari’el such a dynamic duo in the show:
Ari'el and I met doing a workshop years ago, and have been close friends ever since. We bonded over our shared Hebrew tongue, our Israeliness, our passion for authenticity. When this project was announced a few years ago, we fantasized that we would play Haled and Papi opposite each other (we’re both huge fans of the film). On Broadway or in a basement, we didn’t care; we just knew we had to tell this story, to be part of the first major musical set in the Middle East, to portray it as accurately and authentically as possible. It became our mission.

I remember prepping together for our auditions for the original workshop of The Band’s Visit, rehearsing our scenes in Ari’s Harlem living room, sweating and stressing and drinking whiskey at 3:00 PM after our final callbacks. I booked the workshop and he didn’t, then he booked off-Broadway and I didn’t—back and forth while still holding onto this dream of ours—and after a long, arduous road, we both made it to Broadway. It was a hard-fought journey, but well worth it. I still can’t believe that every night, I get to live my dream alongside one of my best friends. Our chemistry is palpable, and I think that comes through in our scenes.

4. What city did you visit on the An American in Paris tour that you would love to return for a bit:
Oh, man, there were so many great cities on that tour, it’s difficult to choose. I loved the bigger cities like Chicago and Philly for the landmarks and the culture and the food. Then again, I loved the small towns as well, where there’s not much to do but find some little watering hole on Main Street and hang with the locals. But if I had to return to one city, I think it would be Seattle. We were only there a week, but the beauty of the Pacific Northwest took my breath away—the mountains, the Puget Sound. I love the book and coffee culture, I love how the different parts of the city feel like different worlds, I love how educated and progressive the people are, I love Twin Peaks and I love Frasier. It was also sunny the entire time I was there, so I guess I experienced more of the Upside Down version of Seattle...

5. What was your biggest Wicked mishap:
A few weeks into my very first run as Boq in Wicked in San Francisco, I ate a cheeseburger about an hour before the show. Just as the stage manager called places, I could feel something wasn’t right. I was dizzy and faint and nauseous. The stage manager asked if I needed to call out, but I was still so new to Wicked. It was my first big job, and I didn’t want to be “that guy” who calls out two weeks after joining the company. So I somehow pushed through the opening number and “Loathing,” but then came the dreaded wheelchair dance in “Dancing Through Life,” where I spin Nessarose around in a wheelchair and jump around in circles. After that moment, the actress playing Nessa looked at me and whispered, “Etai, are you ok? You’re turning green.” Apparently, I literally looked like Elphaba. This wasn’t going to end well. So I sort of nonchalantly made my way off-stage in the middle of the scene, but the farthest I got was the trash can in the wings. So while Elphaba and Glinda were up there bearing their souls, I was violently throwing up my dinner a few feet away. They had to put my understudy on for the rest of the show. It was rough. And needless to say, now I usually have a salad before a show.

6. The Band’s Visit is becoming a celebrity magnet. Who would you totally freak out if you saw backstage:
Over the years, working in the business, I’ve tended to freak out less and less over celebrities. We’ve had some amazing folks visit us who I deeply admire (Lin-Manuel Miranda, John Turturro, Sara Paulson, Edie Falco, Ben Platt, to name a few), but at the end of the day, they’re just artists and human beings trying to make it in this crazy business like the rest of us. That being said, if Gal Gadot comes, I’m sure I'll be as nervous as Papi is around girls. And if Barack Obama visits, I will lose my mind with excitement. But I think I’ll freak out most when my Israeli grandma flies in from Haifa to see the show.

7. What did your time studying in Moscow teach you about yourself:
My time at the Moscow Art Theatre made me see myself as an artist rather than merely as a “performer.” I dug deep into myself. I was stretched physically, emotionally, artistically. I learned to fail. I learned what it is to take your work seriously—in Russia, the actors are trained like soldiers. I gained an appreciation for other forms of storytelling—visual art, ballet, opera. The arts are revered in that country almost religiously, and being an artist is considered the highest calling for a person. There are hundreds of state funded theatres in Moscow alone. Coming from a country where the National Endowment for the Arts is in constant danger, that blew my mind. But most importantly, I was exposed to a culture I knew very little about, which opened my eyes in ways I didn’t expect. I also learned to never try to outdrink a Russian.

8. What was an early role you played in HS or college you’d love to revisit again as an adult:
I worked on a lot of Chekhov while studying abroad in Moscow, and I’m eager to tackle that professionally. During high school, I attended Stagedoor Manor theatre camp for three summers, where I played many great (and wildly age-inappropriate roles)…I was the best damn 16-year-old Fredrick in A Little Night Music you’ve ever seen. But the role that meant the most to me was Tobias in Sweeney Todd (as both a Sondheim and horror fanatic, it’s my favorite show of all time)…though I may have aged out of that role at this point. But the most fun I’ve ever had on stage was playing Gary in Noises Off my junior year of high school. I remember warning my Mom beforehand, “I’m not really falling down the stairs, so don’t jump up on stage to try to rescue me.” There’s no better show to test your physical comedy chops, and I’d love to do that one again.

9. Who was the first person you called after you booked The Band’s Visit for Broadway:
My parents. They had been waiting with bated breath for days and they were thrilled. But what was really special was being on tour with An American in Paris when I found out. I got the call between shows on a two-show day. My fellow cast-mates had watched me obsess over The Band’s Visit for almost a year, and they knew that I was supposed to get word that day. So when they heard my excitement from my dressing room, they ran in shouting and cheering and surrounded me with a giant celebratory hug. I was so grateful for the overwhelming love and support from my American in Paris family in that moment, and it’s always extra meaningful when one of them comes to see me in the show.

10. How do you spend a typical day off from the show:
Aside from the typical adult-ing—bills, errands, laundry, groceries—I like to do at least one thing to inspire me for the week ahead. Usually that means catching a play or a movie I’ve been dying to see. It’s also my opportunity to spend time with my brother or my real-people friends (meaning non-theatre people) who I usually can’t see due to the show schedule. So I’ll usually throw in a coffee or a dinner in there if I can. But eight shows a week is no joke, so I tend to take it easy on my day off…binge Netflix, play some video games, or if I’m feeling extra lazy, treat myself to a massage.

The Band's Visit
Best Priced Tickets
Newer
Exclusive! Watch Jay Armstrong Johnson SLAY Kerrigan and Lowdermilk's "Run Away With Me" from The Mad Ones
Older
Broadway Unplugged: Home for the Holidays Star and The Voice Winner Josh Kaufman Does a Killer Cover "What Christmas Means to Me"