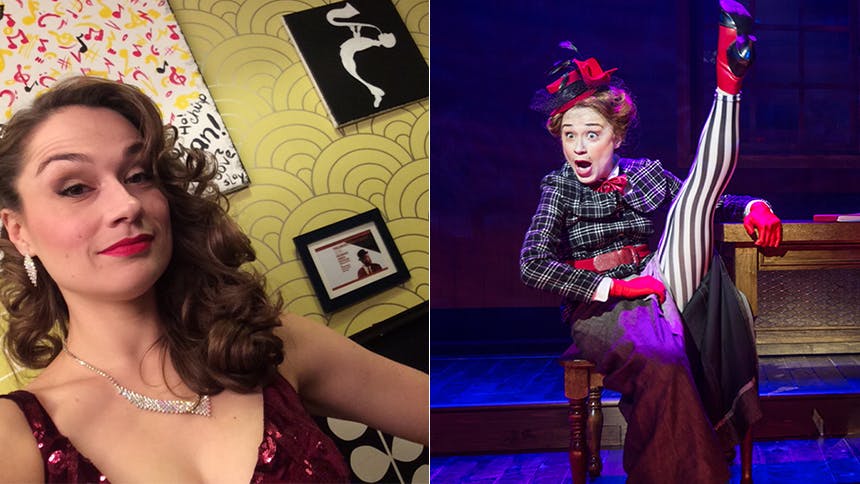 Dobbs previously led the musical adaptation of Jane Austen's Emma as the title character, appeared off-Broadway in A Tree Grows in Brooklyn, leant her voice to Yu-Gi-Oh and Pokemon, and released an album of standards Everything Old Is New Again. Below, she talks with BroadwayBox about those projects, dream roles, and Himself and Nora.

1. Himself and Nora character I’m having most fun as:
Harriet Weaver is the most FUN—a wealthy British political activist who funded Joyce for many years and miiiight have been a bit "stimulated" by his writings...? Yes please! Lucia Joyce is definitely the most interesting, as I had to figure out how to physically manifest the paranoid voices in her head—a key sign of schizophrenia—and demonstrate her own unique passion for words in a rather short amount of stage time.

2. Playing so many characters in one show is:
THRILLING! I have the responsibility of showing a glimpse of 6 different women who were all influential to James Joyce the man and the writer. They are real, they are specific, and in the play they need to be immediately recognizable from one another.

3. My favorite piece of literature:
Nicholas Nickleby by Charles Dickens. So many VIVID characters. Each chapter is like a piece of candy!

4. Favorite fictional work that takes place in Ireland: James Joyce's The Dead. So special as a novella, and special to me as it was my first professional theater job. I was the off-stage female understudy for The Dead at American Conservatory Theater and had the privilege of watching Gabriel Conroy's family drama unfold night after night. It was beautiful.

5. My secret for mastering an accent:
Ask my mother. I've been parroting people since I was four. But seriously—find recordings of REAL people with authentic accents and repeat their exact words—remember the feeling and the music of their speech in your mouth. I refer to Robert Blumenfeld's books when I need to jot down precise pronunciation changes in my script.

7. My comedy icon:
Lou Costello, Carol Burnett, Groucho Marx, Eve Arden, and Bugs Bunny. Don't make me pick one. But if you ever see me on the subway late at night laughing, I am probably listening to the Martin & Lewis Colgate Comedy Hour radio show broadcasts. Brought to my iPhone by Legacy of Laughs (Old Time Radio) podcasts.

8. Regional credit I wish NYC could have seen:
Emma in Paul Gordon's musical adaptation of Jane Austen's Emma. I have played her in San Francisco Bay Area, Cincinnati and St. Louis. I hope to bring my favorite headstrong titular heroine to NYC someday!

9. One thing people don’t know about voice over work:
Almost daily auditions result in maybe two bookings in a year. But it's all good! Also, downward inflection and slight vocal fry is IN for commercials now. Don't tell Jim Thornton.

10. If you were going to listen to one song off Everything Old Is New Again, I’d suggest:
"As Time Goes By", as you may have heard it before but probably not in its entirety. My recording starts with the seldom recorded verse. I love finding the rare verses!

See Lianne Marie Dobbs in 'Himself and Nora' at off-Broadway's Minetta Lane Theatre.

Himself and Nora
Best Priced Tickets
Newer
Hot Clip of the Day: A Full First Look at Shoshana Bean as Fanny Brice in Funny Girl
Older
VIP Pass Into Five of the 2016 Tony Awards' Hottest Parties with Exclusive Photos
Sign up for BroadwayBox Discount Alerts