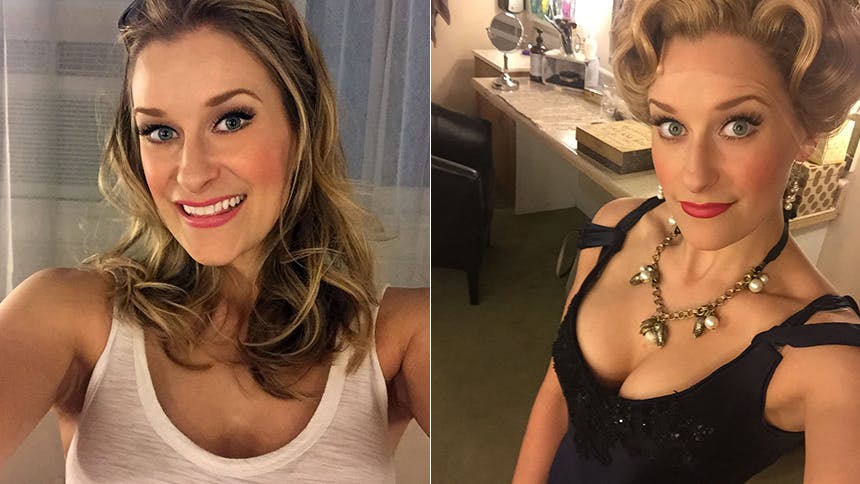 Dana Costello has been a part of the musical Finding Neverland

since its inception at A.R.T., and now the longtime cast member takes over the role of Mary Barrie, the fabulous but intense wife of Peter Pan creator J.M. Barrie. BroadwayBox gets to know her a bit better below as she talks about the glamour of Mrs. Barrie, the power of the Belle dress, and why her neighbors might hate her.

1. The thing I love most about Mary is:
Her costumes! She is a diva!!!! I am a big fan of all things sparkly, (even my wedding colors were "purple and sparkle"). Her first dress with the diamond buttons down the back is the stuff of my dreams.

2. Hashtag to describe how I feel when I’m all made up in her costume and hair:
#ITSMARYB*TCH....did I mention she's a diva?

3. My most cherished Finding Neverland memory so far has been:
During the out of town tryout at A.R.T., we had a show where the power in the theater went out for Act 2. We cleared the stage, moved some acoustic instruments up, and performed without mics or fancy lighting. The audience and the actors were so connected it was like we were all breathing together. It was incredibly moving.

4. The first musical I truly loved when I was younger:
I saw Beauty and the Beast when I was little and fell in love! It's still one of my favorite musicals. I played "Belle" in college and I swear I was more emotional when I tried on the big gold dress than I was when I tried on my wedding dress. It's a role I'd love to play again.

5. The moment in Finding Neverland I look forward to most each night:
Honestly? Taking off the blue corseted dress and breathing in the sweet, sweet freedom! Corsets are a horrible invention—and ladies: waist training is a myth!!!!! They do look fabulous though.

6. One thing most people don’t know about life backstage:
We have way too much fun for people who are supposed to be at "work." There's a lot of joking around, laughing, singing, interpretive dancing to whatever is being sung onstage. One of the dressers even brought in a toy that makes fart noises. So, ya know, grown up stuff.

7. Go to album to sing along to when I’m alone:
I PERFORM "She Used To Be Mine" from Waitress in my shower. I'm pretty sure my neighbors hate me....

8. Best advice about theatre I’ve ever received:
My beautiful castmate Laura Michelle Kelly said something to a group of students during a talkback that really resonated with me. Like many kids, I was teased and often felt like I didn't fit in anywhere. She said, "The thing that makes you 'different' is the thing that makes you special. Embrace it!"
I wish someone had said that to me when I was young! It's so true; in life and on stage.

9. My favorite film or TV show set in the U.K.
TV show: Downton Abbey. I'm devastated it's over.
FILM: Love Actually is a perfect movie. I can't even say which moment I like best, or which actor, because every single one is perfection. Ugh, the way Emma Thompson dries her tears when she's listening to Joni Mitchell...is it too late to give her an Oscar for that scene? I'm crying just thinking about it.

10. Pop culture phenomenon I am all about right now:
Hamilton. And I'm not even a little bit sorry about it. It's just THAT good.

Finding Neverland
Best Priced Tickets
Newer
Hot Clip of the Day: #TBT to Sally Mayes Comical She Loves Me Solo
Older
Five Reasons You HAVE to see Eclipsed Before It Ends Its Broadway Run