Introduce Yourself(ie): 10 Questions with the Title Star of Fiddler on the Roof, Jesse Kovarsky 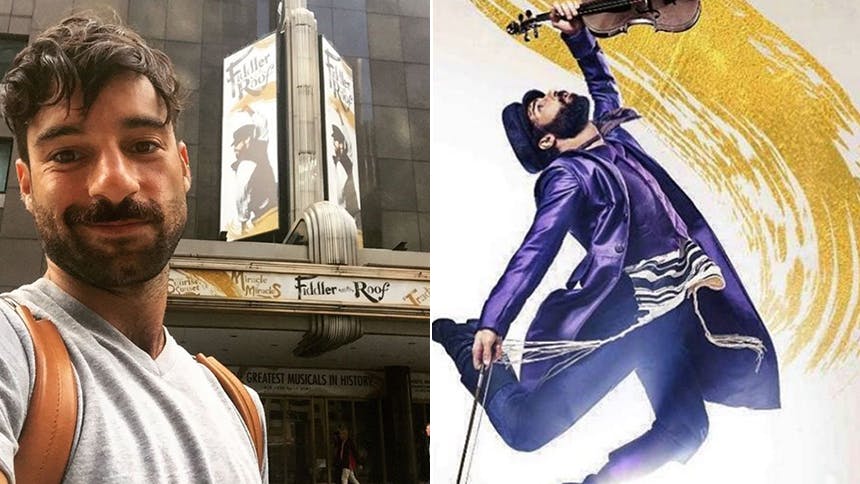 Jesse Kovarsky makes his Broadway debut as the title fiddler in the gorgeous revival of Fiddler on the Roof. The Chicago native previously appeared onstage in Sleep No More and in The Met's The Death of Klinghoffer, as well as the films The Muppets Most Wanted and Anna Karenina.


BroadwayBox caught up with Kovarsky to talk about life at Fiddler, his muppet spirit animal, and the place in the world that brings him most joy.

2. Three things I need for a two-show-day:
1.) A kiwi that I eat during intermission for both shows skin and all.
2.) A cold brew from Bibble and Sip between shows.
3.) A 20-minute walk between shows outside of the theater listening to my music on shuffle.

3. My favorite moment on stage in this production:
The opening sequence. After the sound of a train echoes across the stage, the entire theater falls silent. All ears handed over to a violin that plays the first 12 iconic notes of the show, and from out of nowhere the audience sees a fiddler rise from the bottom of the stage slowly ascending into the air with a house trailing beneath him. As he floats out of the sight, the music builds and starts to come to life paving the entrance for the entire cast as they slowly ascend from beneath the stage. As these figures start to appear, it’s as if they are the shadows of all those who once lived in Anatevka being given another chance to retell their stories. It’s such effective storytelling and a really beautiful way to start a show.

4. Outside of performing, I feel super passionate about:
My freedom in mobility. I really cherish the ability to roam and travel on my terms and my time, so I bought a vespa. It’s yellow, and I named it Butter.

5. Place in the world that brings me most joy:
An amazing tiny Italian restaurant in London that sits on the top of Columbia Road called Campania Gastronomia. I love going on Sundays during the flower market and sitting in the window seat watching people purchase flowers while ordering the most delicious affogato ever.

6. One thing my The Death of Klinghoffer experience taught me about myself:
I have a voice and an opinion towards the work I do, and I think it’s necessary to invest the time to understand why you do what you do.

7. My Muppet spirit animal:
Maybe Animal because I can be outlandish and unpredictable and not making sense a lot of the time.

8. My craziest Sleep No More story has to be:
There are secrets that are shared behind closed doors that aren’t meant to be revealed once those door opens. So I’ll be keeping those secrets to myself. :)

9. The last TV show I binge-watched:
Stranger Things—I watched the entire season in one night.

10. Three words my friends/family would use to describe me:
Spontaneous, cartoonish, a unicorn.

See Jesse Kovarsky dance, fiddle, and fly in 'Fiddler on the Roof' at the Broadway Theatre through December 31.