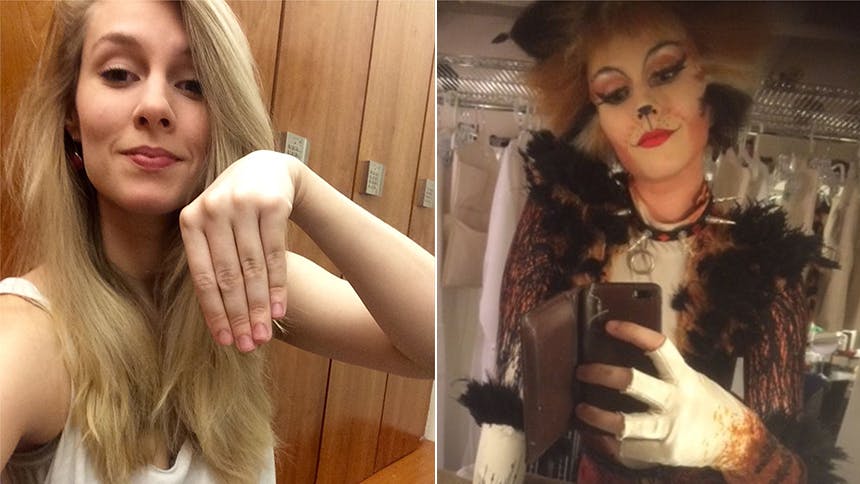 If you see the revival of Cats

(and you should!), you're going to have trouble taking your eyes off of Christine Cornish Smith and her sexy, magnetic Bombalurina. Smith makes her Broadway debut in ALW classic singing "Macavity" with Kim Faure, and it's one of the highlights of the musical.


Below, BroadwayBox hears from Christine Cornish Smith as we talk Cats fans, Velma Kelly inspiration, and her worst audition story.

1. Three things I need to get ready for the show:
Heating pad, foam roller, and the energy of my incredible cast!

2. Hashtag to describe the feeling of making my Broadway debut:
#StillCantBelieveIt

3. In “Macavity”, I am serving you:
Enticing and dangerous indulgence.

4. Regional role I’d love NYC audience to see:
Laurey Williams in the Stroman version of Oklahoma! It was truly out of my dreams. And I would love to keep investigating that character…so much to discover in that role/show!

5. My most memorable audition story:
Probably when I had to audition for a summer stock theater at my school (CCM) in front of many of my colleagues. I was singing the end of “Legally Blonde” for the part of Vivian…and I sang the WRONG lyrics (“I see a star and you’re goin FAR and you da-da-da dee-DOOO”), but with SUCH commitment and gusto. Followed by a scream and a witch cackle. Needless to say...I didn’t get that job. I think I scared them.

6. The most surprising thing about being a part of Cats is:
How touched I am by all the beautiful fans of Cats at the stage door! Every night I am just so in awe at how many people grasp the heart and message of the show—despite the show being such a spectacle.

7. Role I wanted to play so badly when I was in high school:
Velma Kelly in Chicago! I watched the movie with Catherine Zeta-Jones about 100 times. I was inspired by this feminine and powerful role—seeing a character own her body and voice made me feel confident about having curves myself.

8. My guilty reality TV obsession:
If I had to choose, it would be Naked and Afraid! But I’m more of a Breaking Bad/House of Cards TV series person!

10. Fictional character I would consider my spirit animal:
Who doesn’t want to be Katniss Everdeen?! Strong willed and a fierce protector!

Get yourself over to Broadway's Neil Simon Theatre to see Christine Cornish Smith slay as Bombalurina in 'Cats'.

Cats
Best Priced Tickets
Newer
15 Killer Covers of Waitress' Showstopper “She Used To Be Mine”
Older
Hot Clip of the Day: Start the Week with Heather Headley's The Color Purple Showstopper