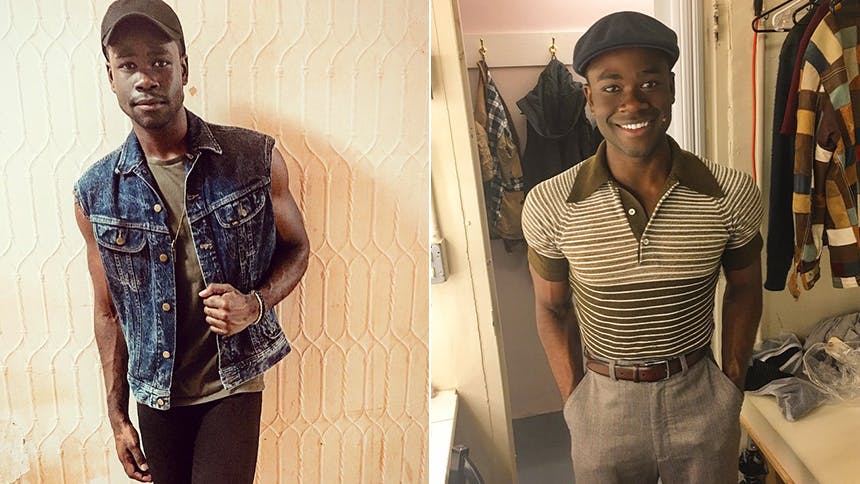 After making his Broadway debut in Rocky and appearing off-Broadway in The School for Scandal and Love's Labour's Lost, Bradley Gibson is back on B'way as Tyrone (the brother to Ariana DeBose's Jane) in the musical adaptation of Chazz Palminteri's A Bronx Tale. BroadwayBox caught up with Gibson to hear from him about the backstage kiki happening at A Bronx Tale, the musicals that defined his childhood, and his Oz dream.

1. Moment in A Bronx Tale I find myself thinking about most outside the Longacre:
Honestly, what I think about most outside of the theater would have to be the music! Alan Menken and Glenn Slater have written an amazing score for our show. The music transports you back in time, and there is no way you can leave without getting those great songs stuck in your head.

2. One thing I love about life backstage at A Bronx Tale:
Spending time with the cast and crew. We are truly one big happy family over at the Longacre. Since day one, we have all genuinely enjoyed being together. There is always a "kiki" happening backstage!

3. The moment I knew I wanted to be a performer:
The second I stepped on stage as a kid doing community theater. Growing up I was always extremely shy, but my family and close friends knew that I loved to sing and dance. My 4th grade teacher convinced me to audition for local productions and the rest is history!

4. A role on my Broadway bucket list:
Fiyero in Wicked...that would be so DOPE!

5. My favorite memory of Rocky on Broadway:
Making my Broadway debut during previews. I was a swing so it all happened very last minute, but having the support of the cast and then seeing all of my friends in the audience is a memory that I will never forget.

6. My most memorable audition story:
There are so many, but one that I will never forget is actually my final callback for Rocky. It was pretty much an all day event, and in addition to acting, singing, and dancing, we also had to go through rounds of circuit training—it was unlike anything I had ever experienced. Broadway Bootcamp!

7. Movie from the 1960s I know every word to:
It would have to be The Sound of Music. Watching movie musicals together was sort of a tradition in my house growing up. These movies were my first real introduction to musical theater.

8. My ultimate desert island Alan Menken album:
Beauty and the Beast! As a kid I watched the VHS so many times it broke. I still know pretty much every single word.

9. TV show I don’t miss an episode of:
How To Get Away With Murder! I gotta know what Annalise Keating is up to every week.

10. Play or musical that absolutely shook me as an audience member the first time I saw it:
I don't think I'll ever forget the first time I saw Ragtime. It was the first Broadway show I saw in college, and it had such a profound effect on me. The story is always so relevant and I have so much love for Ahrens and Flaherty. That score is perfect!

Get over to Broadway's Longacre Theatre to see Bradley Gibson as Tyrone in 'A Bronx Tale.