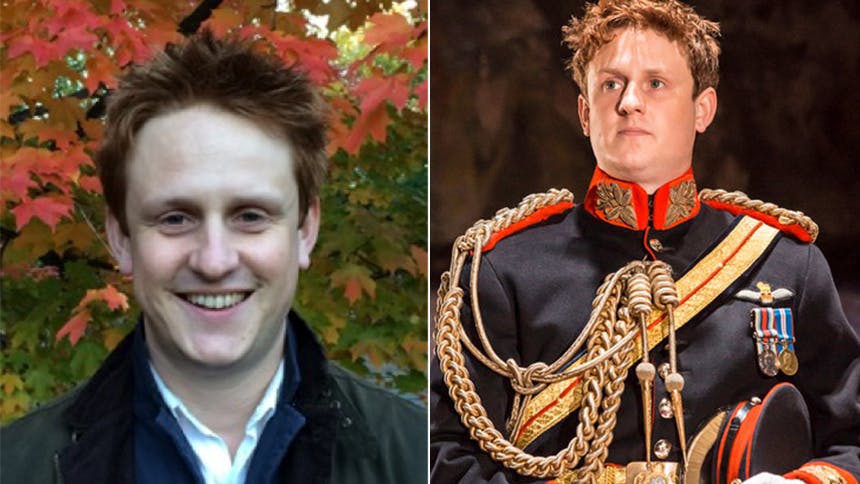 , a future history play spoken in iambic pentameter which imagines the events following the death of England's Queen and the reign of her eldest son, Charles. The whole gang is there: Camilla, William, Kate, and Harry. Playing Prince Harry, who is struggling with abdicating his title, is Richard Goulding, and below BroadwayBox gets to know more about this acclaimed British actor making his Broadway debut.

1. Quality I admire most about Prince Harry:
Raffish ginger charm.

2. True or False: I would abdicate a royal title for love.
True.

3. Best piece of advice I’ve received about acting/the business:
It’s not about you, it’s about them.

4. In my opinion the biggest difference between the West End and Broadway:
More noise, less cynicism.

5. Shakespeare character I’d want to grab a pint with:
Benedick [Much Ado About Nothing].

6. Movie I love so much I know every word:
Mary Poppins/Gladiator/Robin Hood Prince of Thieves.

7. British TV show all Americans should check out:
Test Match Special (it’s on the radio not TV, but it’s so fantastically English). Otherwise, Fawlty Towers.

8. Three things I need in my Broadway dressing room are:
crosswords/Scotch (for after the show)/armchair.

9. One thing on my New York bucket list I want to do or see while I’m here:
Staten Island Ferry/Neue Gallery.

10. If my iTunes only had one album on it, I would save:
Mozart Mass in C (irrepressibly joyful); Prince, The Hits 2.