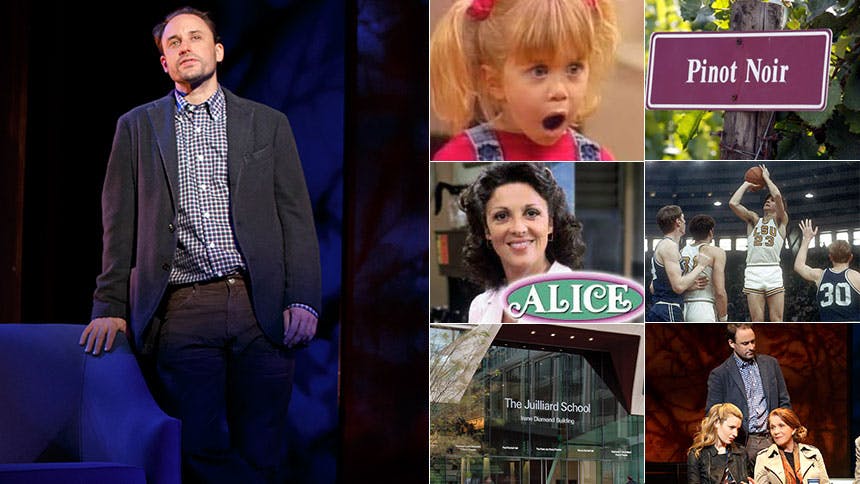 . BroadwayBox caught up with the charming and funny Wit, Belleville, & Cradle and All alum for seven fun, random questions all about the show.

1. I would describe 15-year-old me as:
Kind of a jock, in that I was a bad student and played three sports. But I went to Hunter High School (alma mater of Lin Manuel Miranda and Bobby Lopez), so we weren't as much of a sports powerhouse as we were a musical theatre powerhouse. But I didn't really discover theater until college when I didn't make the basketball team. And the last musical I was in was West Side Story in 6th grade. I don't know why Lin or Bobby haven't called.

2. TV mom I adored growing up:
Alice, c'mon. I hope I'm half the son to Linda that Phil McKeon was.


3. My most cherished Juilliard memory is:
I went to Juilliard as a playwright, but have been doing more acting since, so just the fact that someone considered me a playwright is kind of a cherished memory. Just kidding, I have a new play hitting the streets soon. I very much cherish the opportunity I had, to sit in a room with Marsha Norman and Chris Durang and eight amazing playwrights and read a play every Wednesday and talk about it, and talk about the world.


4. My favorite Linda Lavin moment in the show:
There's a scene where I'm trading barbs with my mom (actually it's not a good trade, I'm mostly receiving them from her), and the last thing she says is "you were the only twins in the neighborhood" and makes a grossed-out face that eventually makes my character crack a smile. Every night she gets grossed out by our twin-ness in a slightly different way. It's very easy to find funny. But choosing a favorite Lavin moment is like choosing a favorite child. Well, if you're Linda's character in the show, choosing a favorite child isn't that tough. It's me.

5. Pop culture’s ultimate pair of twins is:
Maybe the Winklevosses? Or the Olsens? Who's richer? They've started a new paradigm of uber-rich twins. And they both would be even richer if not for a couple evil forces. For the Winklevosses it was Zuckerberg stealing their idea, and for Mary-Kate and Ashley it was getting older than nine years old.

6. My pre and post-show ritual includes:
I usually have a cup of Yogi Throat Comfort tea before the show. Even if my throat is fine it's a delicious tea. So many layers of flavor. Do you think this could get me a sponsorship deal with Yogi? And I usually have a glass of wine after. Do you think I could get sponsored by Pinot Noir? When was the last time an actor got sponsored by a grape?

7. I knew I had to be a part of Our Mother’s Brief Affair because:
I think it's a beautiful and hilarious play. I've always wanted to be in a Richard Greenberg play ever since I saw Three Days of Rain with Patricia Clarkson, Bradley Whitford, and John Slattery, almost 20 years ago. I've been a devoted Greenberg fan ever since. And I get to talk to the audience. I had never done that before. It's harder than it looks. I always get upset in a direct address play when I feel like people aren't really talking to the audience, but then when you're up there you realize that you can't see a thing because there are bright lights in your eyes. I'll never judge again.


See Greg Keller talking to the audience and smiling at Linda Lavin in MTC's Our Mother's Brief Affair at Broadway's Samuel J. Friedman Theatre through March 6.