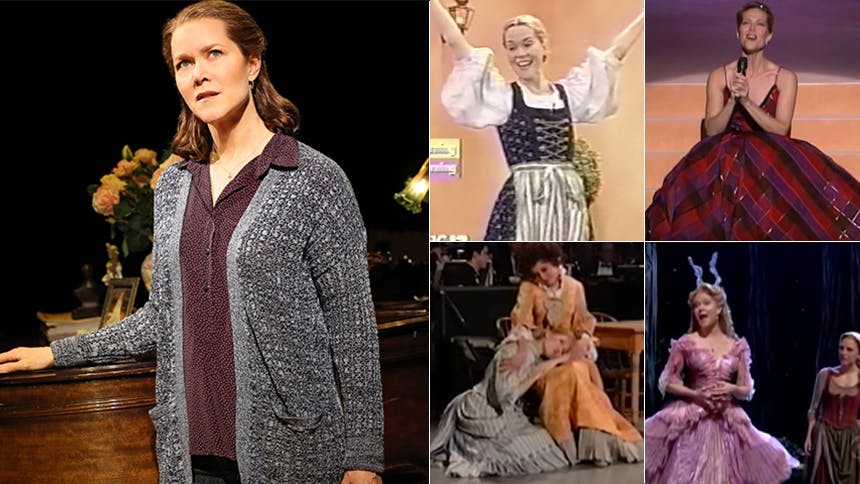 , and Broadway fans everywhere are losing their minds over the fact that Luker now sings "Days and Days" over at Circle in the Square.


Below, BroadwayBox hears from the nine-time Broadway veteran as she revisits six of her most iconic and beloved YouTube clips.


We had a lot of fun with Rosie. The thing I remember the most, other than it was SO early, was that Rosie spoke to me for a second before our performance and asked me if I was nervous. I said "no" right away, and I remember her sort of staring at me as if she was thinking, "Really"? I think she thought I was a little odd. :)

"Goodnight My Someone", The Music Man with the Boston Pops


What a great experience. I loved singing with the Boston Pops! And the conductor, Keith Lockhart, is a gem. We had very little time to throw that show together I remember. Yikes! I'd forgotten about that great red dress! My friend, the designer, Donald Deal loaned that to me. I just remember being so thrilled to be up there singing that gorgeous song with this sublime orchestra. I had sung the song on Broadway in The Music Man so I was very comfortable with it. What a night!

"Falling in Love with Love", My Favorite Broadway: The Leading Ladies, 1998


Well, hands down, my favorite memory of this night is Julie Andrews introducing me in that gracious way. WOW!! While she was doing that, and the minutes leading up to it, I was backstage in the wings doing pushups against the wall, trying to calm myself down. My heart was beating out of my chest. And the dress was something I'd seen on a dressmaker's dummy in my neighbor's apt. I saw it and knew it was the dress I had to wear that night. It was beyond thrilling to be on the Carnegie Hall stage.


This was the craziest night! The artists paying tribute to Julie Andrews were all onstage at the same time, behind these big posters. It was me, Audra McDonald, Kristin Chenoweth, Jeremy Irons, Robert Goulet, and Patrick Wilson. I was last in the program, singing "The Hills Are Alive", so I had to wait for what seemed like hours, to go on! Talk about your heart beating out of your chest! But in the end, when I got out there and saw Julie Andrews looking down at me with that beautiful smile I knew I just wanted to do well for her. It was an unforgettable night. But what's going on with my hair??


What fun! We always had such a good time doing that number. I have a vivid memory of Susan Stroman teaching us that shuffle dance in Toronto where the show first opened. Stro's amazing. She made it look so natural and so perfect.


I came into Cinderella in the Fall of 2013, and I don't think I've had more fun in a show. I got to be a character lady, finally! And Laura Osnes and the cast were just dreamy. That particular performance was shortened and changed a little so it was a bit crazy. We had very little rehearsal! And the flying! That was the first time I'd done that and I just loved it! What a beautiful show that was.

Don't miss Rebecca Luker in 'Fun Home' at Broadway's Circle in the Square Theatre through May 22.