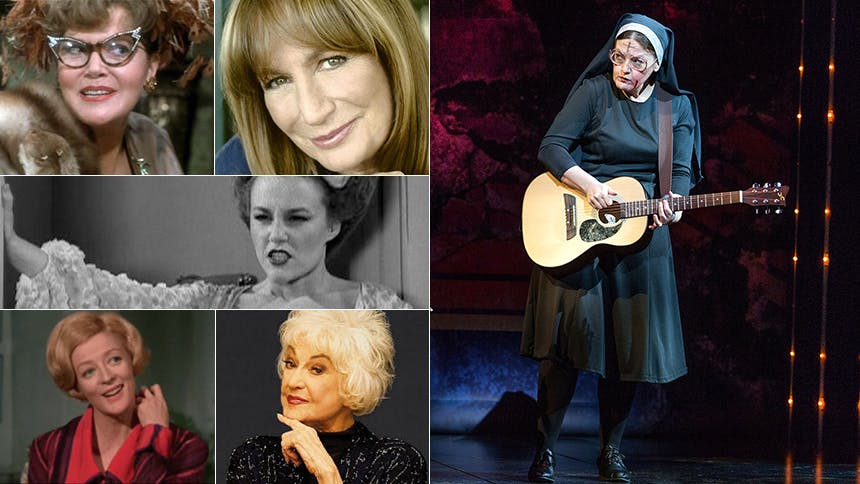 There isn't an audience member who leaves Disaster! not talking about Jennifer Simard as Sister Mary and her on-again/off-again relationship with the slot machine. (She's a recovering gambling addict who turned over a new leaf and gave her life to Jesus...until she was tempted.)

One of the funniest performances in a musical this season, Simard does it all, from hitting crazy high notes while grinding on a slot machine in "Never Can Say Goodbye" to making a full meal of throw-away punch lines. BroadwayBox caught up with the hilarious four-time Drama Desk Award nominee to hear about the five funny ladies who inspire her and her comedy.

The first time I saw her was at a drive-in movie theater showing of Young Frankenstein. I loved her entire performance throughout, starting with her very first scene in the Taffeta dress and her subsequent dodging of Gene Wilder's air kisses.

My first viewing of her was in Laverne & Shirley. I love both she & Cindy Williams. Regarding Penny, I specifically recall the episode at Dead Lazlo's Place where she is a short order cook calling into a microphone for Shirley, the overworked waitress, with the proper name: "Betty Please..." At one point she tells the customers: "Don't harass Betty Please..."

The first time I saw her was in the film Murder By Death. I'm so drawn to her masterful dry wit. In the film, Truman Capote's wheel chair makes a grand exit from the dining room. She ever so delicately says "I hope he knows how to stop that thing." In lesser hands, not so much but in hers, teeny diamonds.

The first time I saw her was also in Murder By Death. My favorite Eileen moment was her 'break the ice' 30-second monologue at the dining room table in the film Clue. Other than a few breaths, she uses virtually no commas & punctuation between clauses. Funneh.

I honestly don't remember my first Bea memory. Seems like she was always there. But she and ALL The Golden Girls were amazing. As Dorothy Zbornak, like Maggie Smith, she too was so great at the dry throw-away punch line.

I remember one episode where all the girls have the flu and one of them asks if there's anymore juice. She pours the remainder into her own glass then says "No, we're all out." Delicious.


If you want to see a hilarious female performance check out Jennifer Simard as Sister Mary in Disaster! at Broadway’s Nederlander Theatre.

Disaster!
Best Priced Tickets
Newer
Hot Clip of the Day: Take a Journey to the Past with Liz Callaway
Older
Bloomingdale’s Keeps You Satisfied With Lots of Hamilton Merch