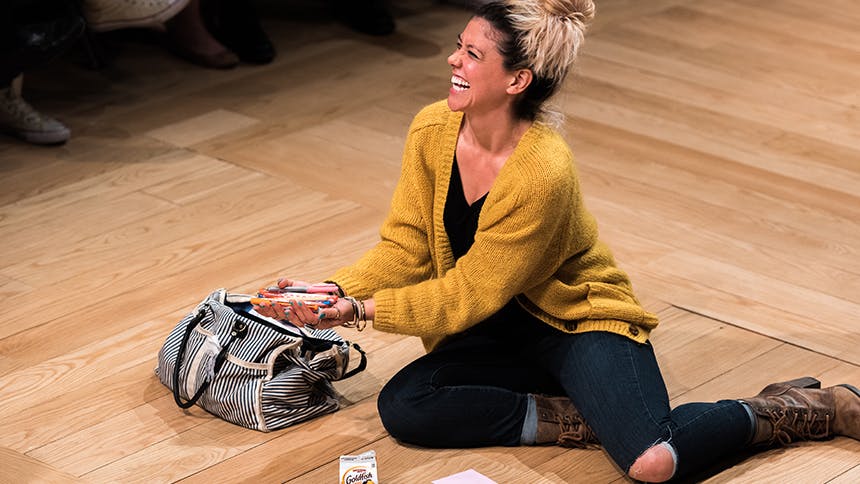 Zoë Winters is having the off-Broadway career most young actresses can only dream of. Throughout the last five years, Winters has appeared in a string of acclaimed plays, including An Octoroon, 4000 Miles, Shows for Days, Red Speedo, Love and Information and the current hit Small Mouth Sounds

BroadwayBox caught up with Winters to talk about her Small Mouth Sounds character, memorable theatrical experiences, and the extraordinary roster of female co-stars and directors she's worked with so far.

1. What’s the biggest challenge and reward in playing Alicia in Small Mouth Sounds?
The biggest challenge has become throwing water in a cast member's face. I'm about five inches away from this actor, so it shouldn't be a problem but sometimes I just miss him completely and drench the wall behind him. It's a combination of inaccurate wrist angle and anxiety. My therapist happens to be a sports psychologist so I may take a session off from my usual topic of self-doubt and just focus on how to throw something.

The biggest reward is feeling that the audience is tracking every character's journey despite our not having many words to tell the story.

2. Small Mouth Sounds is so unique and memorable. Tell me about an experience you’ve had as an audience member that you’ll never forget.
There are so many, here's two:

Ruined by Lynn Nottage at MTC affects me to this day. I brought my best girlfriend to the show and she and I held hands the whole time. We still talk about it. I'm a bit of a fan-girl of Quincy Tyler Bernstine from that performance (among others), so doing Small Mouth Sounds with her has been really special.

The other is when I first saw my brother play with his band. As kids he was sweet and shy and I was called "monster baby." Then he moved to Portland to do art and play music. He came back to the Bay Area for a gig and I went to see him perform for the first time. He was WILD. His dancing and singing and mic choreography was unbelievable. He was so bold. When he started dancing my dad said "Holy Shit."

3. What’s the last TV or film performance that really rocked your world?
Sarah Paulson in The People v. O.J. Simpson.

4. What do you hear back most often after friends or family see Small Mouth Sounds?
It's a predominantly silent play so we don't get the usual "how did you learn all those lines" or "I couldn't hear anything."

People are very moved by the play and often feel that they themselves have gone on a silent retreat. Because Bess Wohl doesn't give the audience all of the details about these people, audiences end up attaching their own stories or imaginations to these characters' struggles and I think that deepens their personal investment in the play.

5. Your roster of former female co-stars and directors are just a dream. What’s one thing you learned from working with:
Rachel Chavkin was so sensitive in her direction. She's screamingly funny and playful but she knows how to set a room at exactly the temperature we need to do the best work. She's all about authenticity. How to be bold and real.

Everything Mary Louise Wilson does is lived in and if it's supposed to be funny, it's always funny, which she accomplishes by being truthful.

Patti LuPone is all about the company. She talked a lot about being out there for one-another, relying on each other to make something special.

Judith Ivey helped me understand how my acting is perceived by the audience. Judy is a true comedienne and helped me break through a pattern I had of withdrawing from an audience if I didn't get a laugh. She helped me to take a moment like that and focus and re-engage in a way where the audience could enter. Before Judy I would think an audience hated me and now I just realize they're having trouble understanding me. Or if it's my mother I can always get the laugh as long as I stand up straight.

You have until October 9 to see Zoë Winters in 'Small Mouth Sounds' at off-Broadway's Pershing Square Signature Center.