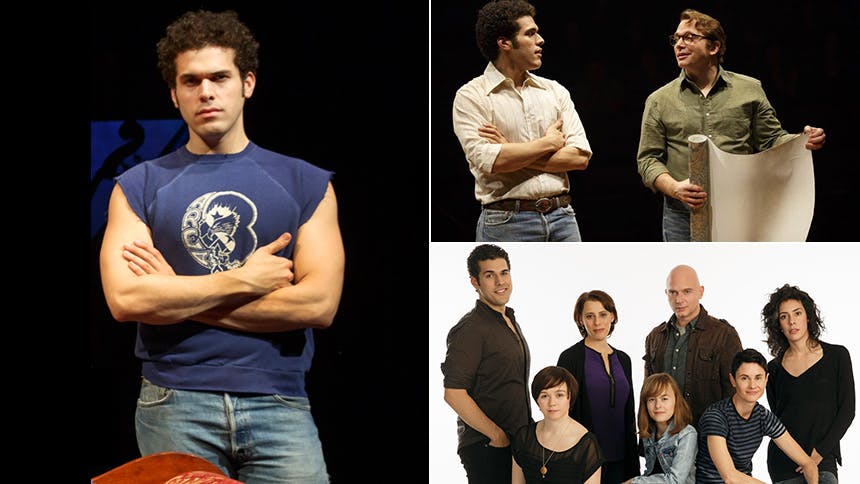 Joel Perez has been with the Tony Award-winning hit musical Fun Home since early workshops, playing the show's off-Broadway premiere at The Public, and making his Broadway debut as Bruce Bechdel's paramour Roy, a teen student of Bruce's, and fabulous imaginary '70s singer Bobby Jeremy. After the show ends its run this fall, Perez joins Tony winner Sutton Foster in the highly-anticipated revival of Sweet Charity.

BroadwayBox caught up with Joel Perez to talk about his long run with Fun Home, '70s pop culture, and emo In the Heights moments.

1. This has been a wild ride and you’ve been with the show the whole time; what’s been the biggest pinch-me moment of your Fun Home experience?
The opening night bow in Broadway was such a thrill. I couldn't believe that I finally made it to Broadway with a show that I love so much. It was such a special development process and I feel so fortunate to have been a part of it. It has made me a better artist and a better person.

2. Most people can't make it through Fun Home without crying. What’s your go-to cry movie and musical?
Movie: If I need a good cry I watch Grave of the Fireflies. It's a devastating Japanese animated film about two children who are orphaned during fire bombings in World War 2.
Musical: When I listen to "Alabanza" from In the Heights I am a mess.

3. You also co-star on the second season of the popular online series The Outs. What about the show feels most authentic to you as a gay man?
What I love about The Outs (and it's something our writer and director Adam Goldman has said) is that it isn't a gay "origin story." So many queer stories are about coming out and the events surrounding that. In The Outs, the gay characters are out and proud and their sexuality isn't the main focus of their lives. I've been out for almost 10 years and my queer friends and I don't really talk much about the fact that we're gay. It's just a part of who we are and we're comfortable living truthful lives. It's very refreshing and rewarding to be a part of such forward-thinking storytelling.

4. You’ve had so many cool people come backstage at Fun Home. Did anyone make you geek out in a major way?
Sally Field. After a show at The Public I was walking out into the lobby and the crowd parted and there was Sally Field weeping. She spotted me and walked up to me and gave me a big hug and I was thinking, "HOLY SHIT SALLY FIELD IS HUGGING ME RIGHT NOW!" I love her.

Hurry to Broadway's Circle in the Square Theatre before September 10 to see Joel Perez in the Tony-winning musical 'Fun Home'.