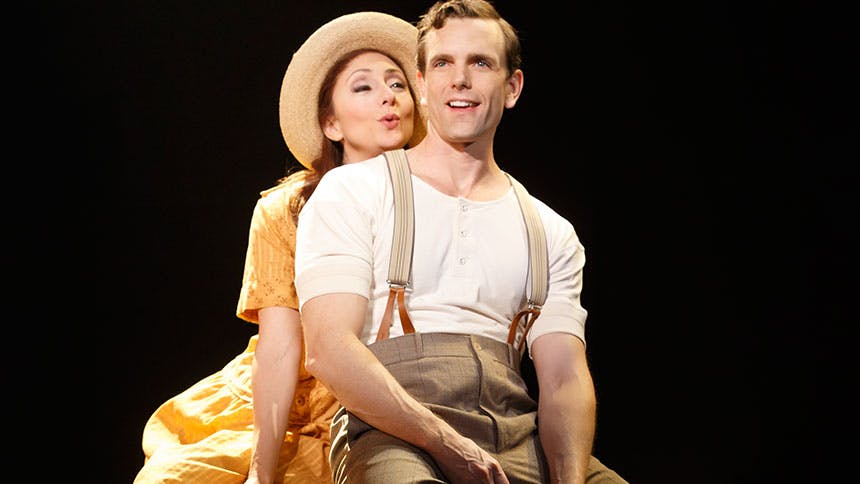 . The BroadwayBox fave (who starred in Jesus Christ Superstar, Once, Daddy Long Legs and Doctor Zhivago) is charming as all get out as Jimmy Ray Dobbs, the wealthy young man who falls in love with Carmen Cusack's Alice Murphy. BroadwayBox caught up with the Canadian transplant to talk about working with legends, married life, and escaping from NYC.

1. What's been your best Steve Martin/Edie Brickell story? The one you're going to bring out at dinner parties for years to come.
He and Edie made me feel so good because I haven't been involved from the start like some of the cast members, and they are so generous—half the time they make you feel like the celebrity in the room the way they defer to you. The producers had numerous parties to celebrate the milestones of Bright Star, and the day before we started rehearsing, they had a soirée at Glass House that I dropped by in between my matinee and evening performance of Daddy Long Legs. I was feeling kind of insecure because it took them a long time to cast me. I had three auditions and the middle one was a dog but the other two were good by my standards, and I thought it was a fit but it took a while to cast me. Then you can get into your head about all sorts of reasons why, and thinking, 'What more can I do? Why haven't they cast me yet?' I was feeling like someone doesn't want me—maybe it's Steve Martin or Edie. You just play this huge head game with yourself. So I'm at the soiree and Steve comes over to me and says, 'Paul, if you do what you did in your audition on opening night, I would be thrilled.' From then on I took a big breath of relief. 'Thank god. They want me.'

2. How has falling in love and getting married changed the way you play these big romances like Bright Star, Once or Daddy Long Legs?
In some ways it doesn't because it's still my job to fall in love with the person I'm working with. I work hard at making what I'm doing as emotionally authentic as possible because I feel that's my job—even playing a violent sociopath like I did last year. When you're single you have no one to be responsible to so the biggest difference is that the work I do now ends there, and when I wasn't married it didn't necessarily end there—it didn't always go somewhere, of course. You shouldn't shit where you eat but I have several times. When you're single you don't have the boundary, unless you're responsible enough or experienced enough to draw the line and I don't think I drew the line—I didn't need to when I was younger. But now I'm responsible to my wife and I'm interested in having more than just my career be who I am. My wife is a good thing for me because I get to compartmentalize what's my work and what's my life. It's very easy and seductive to get lost in work, to get obsessed with it, but luckily I've got the most amazing wife I could imagine.

3. I really thought you did great work in Zhivago. What was that experience like?
When I look at the work I'm generally pretty good at sticking to doing my own job; I can't fix or make something better than it is—I just go and try to bring as much of myself, my humanity, my heart and my intellect to everything that I do. When it comes to Zhivago, it obviously didn't do very well here, but I felt that I did what I wanted to do with it. I was lucky to play the part I got to play. He was very interesting and complicated with a couple good songs, and I got to surprise New York by dancing and being a villain. It was a total win for me though it was a heartbreaker for the show.

4. As a self-professed outdoorsy guy, where do you get your fix in the city? What spots bring you joy?
I'm going to be honest, it's pretty hard. For me, it's about getting away from the energy of the people and connecting with the energy of the planet; getting out into the woods is kinda about scaring myself and reminding myself that the planet is bigger than I am and scarier and can decide to do whatever it wants. We like to go to Cold Spring and hike in and around there. That town is really quaint. But it really is about getting away from people and conversation and just breathing and smelling the Earth.

5. Tell me about your dressing room. What in there inspires you?
My guitar is in here. I like keeping an instrument in the dressing room to play. I'm adding a picture of my wife, and as many pictures of my family I can stuff in here without cramming it up. I have this wonderful picture of four generations of women in my family: my niece, my sister, our mother, and our grandmother. It's just an awesome, rare picture. I have four sisters so women are an important people in my life—a gender I probably favor.