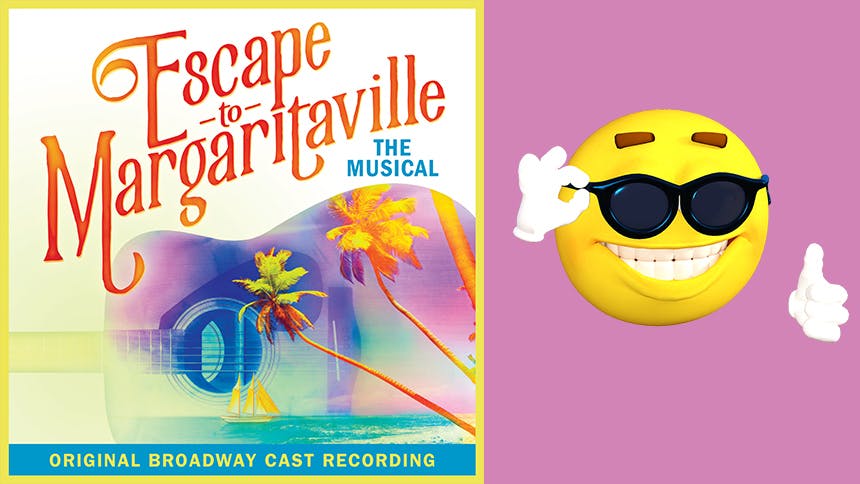 The Jimmy Buffett musical Escape to Margaritaville opens on Broadway this week, and I’m raising a bottle of tequila to the new musical’s terrific cast album. I went into the show only knowing the song “Margaritaville” and incorrectly attributing “The Pina Colada Song” to Buffett, but now I listen to Paul Alexander Nolan & Co. on the daily. The album is the perfect jam as you wait out the clock on spring and summer weather and outdoor drinks at the ready.


Below, BroadwayBox reacts in animated GIF to each track of Escape to Margaritaville.

Right off the bat, Paul Alexander Nolan is a MF star. This voice don’t quit and he sounds so gritty here. (Also, he basically accompanies himself on guitar the whole show too!)

Again, fabulous. Fun. MOOD AF…but also when Lisa Howard comes in at 1:25, I audibly shouted “YAS”. I can’t imagine not dancing in your seat listening to this.

Just a light, quick kiki. The guys and Lisa Howard just giving you that moment at :55 when they come together and SANG. If you’re not in the Margarita mood by this track, this might not be for you.

Ok, cool down moment now. First ballad on the album, just sit back and enjoy. Alison Luff has a seriously beautiful voice, I especially love her from 1:35-1:50. Just bask in it.

Just try and stand still. Also, if you end up listening to this album as often as I do, you will end up shouting “screw” back to your Alexa.

From the jump, Paul Nolan is serving vocals and it’s making me clutch my pearls. This score sure sits in his sweet spot. Then when Alison comes in, it’s like, “yas, yas, yas!"

8. We Are The People Our Parents Warned Us About (Eric Petersen & Lisa Howard)

Eric Petersen & Lisa Howard are just perfection as the featured players of this joyride. And that nice soft ending from Ms. Howard.

9. Son of a Son of a Sailor (Paul Alexander Nolan & Alison Luff)

Time for Paul Alexander Nolan’s ballad, and it’s so smooth and chill. When Alison joins around 1:20, I melt like Olaf in the sun. PS: All these songs are so fast too. This album just flies by.

OK, so it’s more than fair to compare “Margaritaville” to “Mamma Mia!” in which case this would be the “Gimme! Gimme! Gimme! A Man After Midnight” because it kicks off the most fun part of the album. A catchy, dancey wave you just ride until intermission. Also, Rema Webb is giving me my entire life. About time she got some mic time. #Praise

I don’t know if I can talk about this song ‘cause I love it too much. It’s the longest song on the album so far so there is so much individual magic we can call out from Ms. Howard, PaN, Ms. Webb, Andre Ward, & co. Just let loose and enjoy.

The arrangements of this song, I seriously can’t. It’s beyond. Starting from when Rema Webb does “there’s booze in the blender” to Paul Alexander Nolan coming in for the "hang on", up the option. Dead. Deceased…in Margaritaville…and it’s all Rema & Paul’s fault.

You better slay, Andre Ward. This is a full-out dance along number. I have no rhythm but this song sure as hell makes me think I do.

Eric Petersen. What a treat. This song starts out one way, turns into a full tap extravaganza, and then back to that Buffett island aesthetic.

Gosh, what a beautiful story song. The arrangement is so beautiful and the lyrics are moving.

It’s time for the big Lisa Howard song, and I can’t stop dancing. Her and Eric Peterson are serving VOCALS. You don’t even need to see her flying around the stage to have a grin from ear to ear.

And now back to our regularly scheduled dance break. There’s lots of book here keeping it from going into full beach party mode, but then 2:27 happens and it’s ON! Paul Alexander Nolan is just beyond. What a perfect match of role to talent.

So this song got cut from the Broadway production, and while it’s beautiful, it’s not missed. Get me right to the big wedding moment.

20. A Pirate Looks at Forty (Company)

The 2-minute mark to the end is just paradise. Is it summer yet?!

Just this on repeat. This is road trips, the beach, the pre-game, the grabbing your summer love and dancing. It’s legit everything.

Fun last play out track for the encore! This is the beach album of 2018. Done. And while it's wonderful, fun, and relaxing to jam out to, it's even more fun to see IRL, so get a large marg and kick back at the Marquis Theatre.